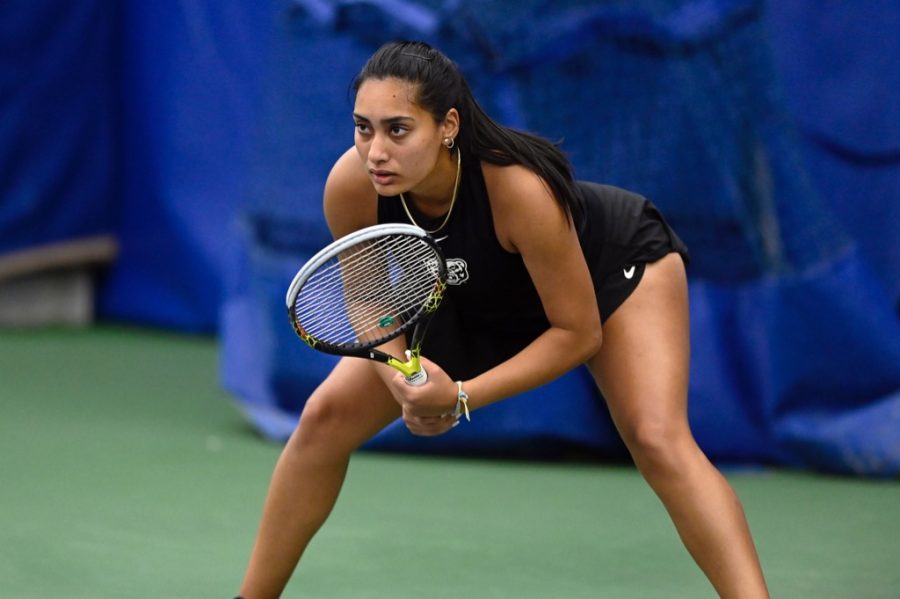 Nirva Patel gets into her stance while the opponent gets ready to serve against LSSU on March 19. Photo courtesy of OU Athletics.

In their first home match of the season, the Oakland Golden Grizzlies tennis team displayed a level of dominance rarely seen, winning the matchup against the Lake Superior State Lakers with a score of 7-0 at the Oakland Tennis court.

Yasmin Glazbrook and Nirva Patel were featured in and contributed heavily to the victory, showing off their talent yet again this week alongside uber-talented teammates such as freshman Liza Mladentseva, freshman Tegan Heaton, and senior Jillian Milano.

The Golden Grizzlies grabbed a hold of the controls for the game from the very start, earning the doubles victory to take the 1-0 lead before launching themselves into singles play against the Lakers.

The Golden Grizzlies secured their doubles wins at the number one spot in the rankings, with Yasmin Glazbrook and Nirva Patel winning their match 6-4 while Mladentseva and Milano notched their 6-3 victory during the second matchup.

In singles play, the Grizzlies yet again started dominating the Lakers, rolling through the matches en route to their six straight victories to close out their 7-0 win while maintaining all top three spots in the singles rankings. The Golden Grizzlies were kept in the top spot by Liza Mladentseva, who won both her sets with scores of 6-1.

While Patel and Glazbrook shone bright on the tennis team’s Florida trip, they are not the only ones making new milestones and reaching new heights on the team. Tegan Heaton has notched seven straight singles wins on the season, with this performance making it her eight straight singles win.

This sensational streak by Heaton has contributed to the amazing run that the Golden Grizzlies have been on this far, as this win marks the third straight victory and their sixth win in their last seven matches. The Golden Grizzlies, with this record, improve to 6-4 on the season, while the Lake Superior State Lakers have dropped to a 3-5 record on the season.