How Oakland sports teams have responded to the Grizz Dome collapse 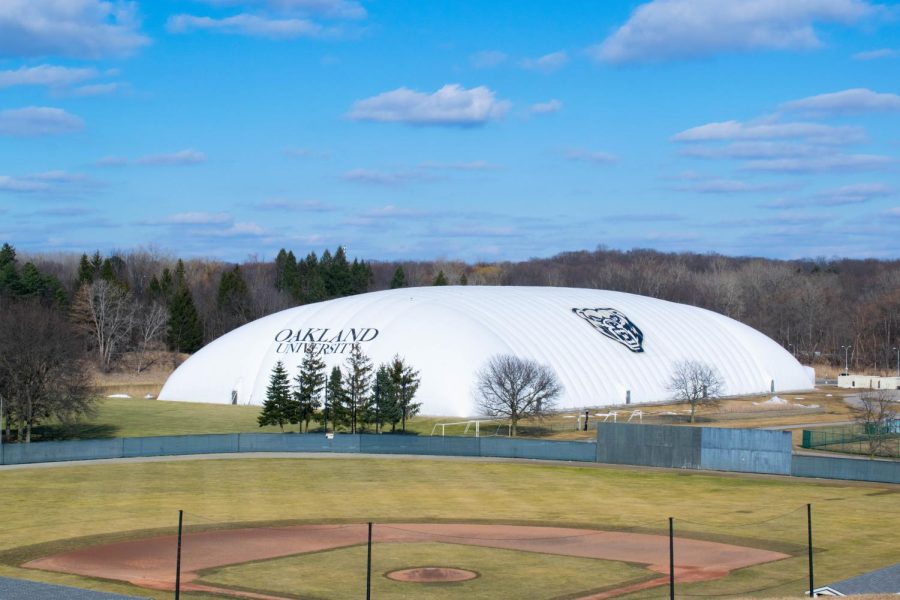 The Grizz Dome has been fully re-inflated, but it will still be a while before it can be used again.

When the Grizz Dome collapsed on the morning of Saturday, Feb. 19, many of the Oakland University sports teams were left without a practice facility.

Baseball, softball, men’s and women’s soccer, track and field, cross country and golf were all left scrambling to find a temporary solution for a practice facility. Luckily, they were all able to make arrangements and have all made due.

“It has certainly been an inconvenience for all of us, but our teams are very resilient and have done a great job adapting to the challenges we’ve faced,” Adrianse said. “The use of the alternative facilities is also being factored into the insurance claim process.”

Baseball Head Coach Jordon Banfield said back when the dome first collapsed that the team would be using an offsite facility, and by the looks of it, opposing teams have also let the team borrow their facilities while they were on the road.

Banfield added back in February that he “wasn’t that worried about it.”

The softball team hasn’t had much need to practice with their travel schedule during the first couple weeks of the season, according to Adrianse.

Both men’s and women’s soccer, meanwhile, have been training at the UWM Sports Complex in Pontiac. The men’s soccer team has also been playing their home games there during the spring season.

Adrianse said both track and field and cross country have been using the Oakland Yard Sports Complex in Waterford.

“But with warmer weather approaching, they are starting to shift more and more outdoors or utilize other on campus options,” Adrianse added.

“We use other facilities for our practice anyway,” Pumford said. “We did use [the dome] two days a week to help with the financial costs since we didn’t have to pay to use our dome, but overall minimal impact.”

“We’ve had a few places, a few avenues that we can go to and do things, and it has been nice to not feel like we had nowhere to go and nothing to do,” Gaudio-Guss said. “So having those options, which we already had them in place because we weren’t in the dome everyday. It’s just that trying to get time on campus is tougher at times. So at least we already had those in place. We just had to add the days that we typically are on campus into our schedule off campus.

Gaudio-Guss said they typically use offsite facilities when they travel anyway, so nothing has changed in that regard.

“It’s a little bit different whenever we go travel somewhere [since] we are using the facility we’re going to anyway because that’s where the tournament is,” she said. “So that’s where golf is probably the most different in that regard.”