Oakland women’s basketball looks ahead to the offseason 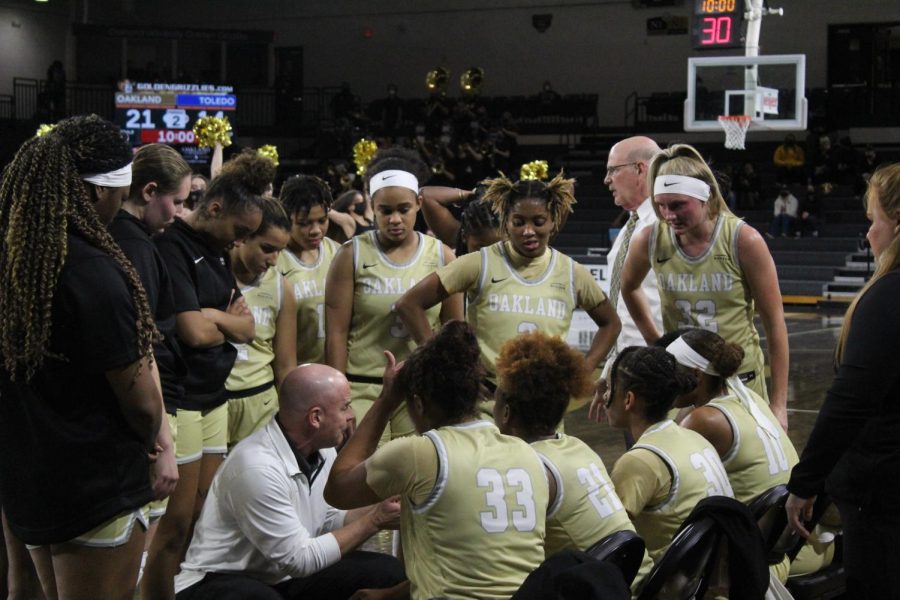 Jeff Tungate has returned to lead the Oakland women's basketball team once again.

The Oakland women’s basketball team’s season came to a close on March 7  when the Golden Grizzlies fell to the IUPUI Jaguars in the Horizon League Tournament semifinals.

Oakland finished the season with a 15-15 overall record, and concluded the regular season with an 11-9 Horizon League record.

The season was full of ups and downs, but the storyline of the season came in early December when head coach Jeff Tungate was removed from the team in need of emergency surgery.

Despite missing most of the season, Tungate was no stranger to the team’s success.

“I thought, obviously it was a season full of ups and downs, a lot of adversity,” said Tungate. “And I really give our staff and our team a lot of credit for what they were able to accomplish because a lot of adversity was thrown their way, and they just kept rising to the challenge. [I’m] really proud of them for that.”

Associate Head Coach Ke’Sha Blanton took the reins in Tungate’s absence and led the team through adversity. Tungate gave Blanton a lot of credit after the season came to a finish.

“To be able to get the team to the semifinals through all that — it’s a real credit to her,” said Tungate. “That’s never easy, and something that when she signed on, never expected to have to do, and she got them through the adversity.”

The season was highlighted mainly by Oakland’s Horizon League Tournament quarterfinal win over the second-seeded Youngstown State Penguins. The Grizzlies went on the road and defeated the Penguins, punching their ticket to the tournament semifinals in Indianapolis. Tungate called the moment “a great feeling.”

“Anytime you can see your team with a water celebration, dancing, and doing all those kinds of things, it’s just a great feeling. Great to see,” said Tungate. “That’s what makes all the adversity worth it.”

Despite the successful season, Oakland has lost three key players to the transfer portal since the start of the calendar year.

Junior Alona Blackwell and freshman Olivia Sims entered the transfer portal in January, and senior guard Kahlaijah Dean as well as freshman guard Kendall Folley each entered the portal after the season concluded.

“The age of the transfer portal is here,” Tungate said. “Everybody gets in for different reasons… I just know that this is the age of college basketball in the year 2022.”

The program will look to ride some of the momentum built this past season into next year.

Tungate also knows that the team has some key pieces to replace.

“Obviously recruiting is a big part of that,” Tungate said. “We’ve got some big holes to fill, that we make sure we do a good job in recruiting.

As for Tungate himself, the head man returned to the office this past week, as he tries to build strength and return to normal.

“[My recovery] is going good,” Tungate said. “I was able to come back this past Monday, and I’ve got to do just a few hours at a time every day and build myself back up again because for three months I basically did nothing.”

If next year’s women’s team has any resemblance to this year’s team, it will be a tough, gritty group, ready to win basketball games.