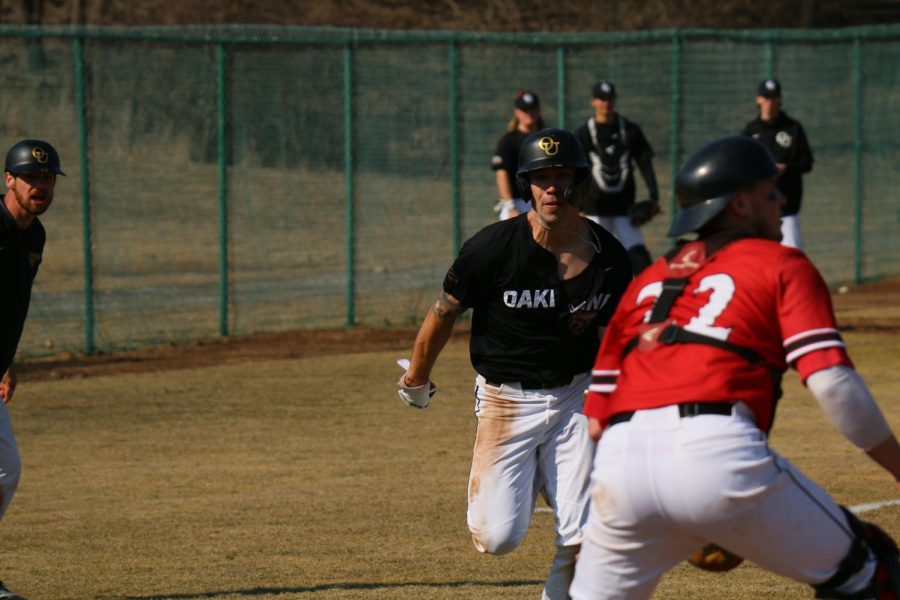 Cam Post when 3-4 with three runs scored in Oakland's 14-4 blowout victory over Rochester University on March 16.

The Grizzlies got on top early and never looked back, putting the game well out of reach before the Warriors could get any runs on the board.

The Grizzlies threatened in the home half of the first, but were unable to capitalize.

Leadoff man Seth Tucker was awarded first base on a hit by pitch. Tucker then showcased his blazing speed by stealing both second and third base.

Rochester’s starting pitcher Nick Gajewski rebounded after his shaky start and struck out the side to keep the Grizzlies scoreless after the first inning.

A Warrior error brought Nigh home from third a few batters later. Cam Post blew the inning open with a two-out, two-RBI single to give the Grizzlies a 5-0 lead.

The two teams went quiet in the third inning, and the Warriors couldn’t get any momentum in the top half of the fourth inning.

Post drove in another run for Oakland with an RBI double off the left field fence. He then scored on a Rochester pickoff attempt which hit Post and ricocheted into right field.

Rochester was able to limit the fourth inning damage to just two runs and trailed 7-0 going into the fifth inning.

The Warriors threatened in the top of the fifth inning, but once again failed to bring any runners around, and they remained scoreless through five innings. In the bottom of the fifth, Nigh and Thomas Green combined for back-to-back solo home runs to put the Grizzlies up, 9-0.

Oakland extended its lead to 10 in the bottom of the sixth inning when Post scored on a passed ball. Heidal continued a strong day at the plate with an RBI double later in the sixth inning.

Oakland continued to blow open the game in the sixth inning when Nigh connected on yet another hit, a two-RBI single, giving the Grizzlies an astounding 13-0 lead. Rochester threatened in the top of the seventh inning with two runners on base, but once again came up short.

The Grizzlies brought one run across in the seventh inning. Gabe Lux pounded an RBI single up the middle, scoring Post, and putting the Grizzlies up, 14-0.

Rochester finally got in business in the top of the eighth inning with a Connor Romine double to give the Warriors two runners in scoring position. Both Warriors scored on a sacrifice fly, followed by an error, and Rochester had its first two runs of the game.

The Warriors added two runs in the top of the ninth inning, but it clearly wasn’t enough. The Grizzlies had this game locked up long before Rochester even began scoring.

Nigh had a career day at the plate. The freshman totaled four hits and five RBIs, as well as two runs scored.

The Grizzlies are now 4-10 on the season. Oakland will host Purdue Fort Wayne in a three-game series starting Friday, March 25.