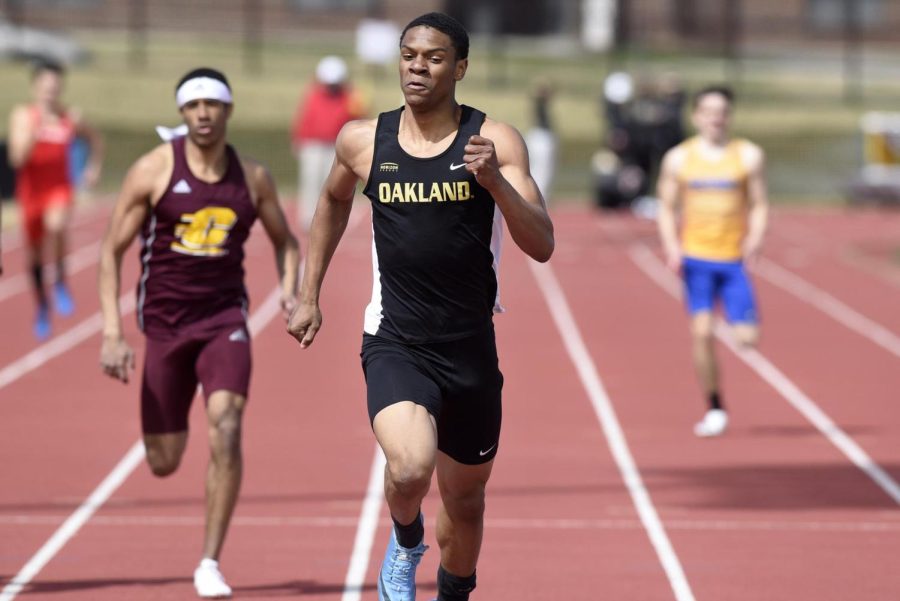 Jimmie Williams has blossomed into one of the most decorated runners in Oakland track and field history. Photo courtesy of OU Athletics

Oakland University track runner Jimmie Williams began his last indoor track season on Jan. 21 at Indiana University’s Gladstein Invitational with one of the worst races of his life.

“When I got done running, I looked up at the board defeated,” said Williams. “I was upset with myself, but my coach and I reflected on it a lot afterward.”

The following week, Williams walked into the Saginaw Valley State University fieldhouse with his head held high. To calm his nerves, he completed warm-ups whilst listening to music.

“I would be more likely to forget my track bag at home than my headphones,”  Williams said. “My headphones are extremely important to me because music helps me stay focused before a race.”

As the men’s 400m race drew closer, Williams closed his eyes and took a deep breath. He prayed to his parents, the two individuals that made his athletic career possible.

“My parents are my biggest inspiration,” Williams said. “They motivate me to get better every day.”

Williams felt at peace as settled into his starting block. At the fire of the starting gun, he ran with his heart.

Once he crossed the finish line, securing a first-place finish, Williams knew time was on his side. With a 46.85 second finishing time, he had just shattered the OU 400-meter school record.

“I felt really good to follow up a terrible race with a record-breaking time,” Williams said. “I was proud to have run my best 400-meter time ever that day.”

Williams is no stranger to success in the sport of track and field. Along with breaking the 400 school record last month, the sprinter anchored the men’s 4X400m relay at the same meet, securing yet another OU record.

Despite his athletic finesse, Williams’ dream of college running almost didn’t happen. In fact, Oakland University was the only school that gave him an athletic scholarship offer.

“Oakland was the only school that gave me a chance,” Williams said. “I’d like to thank Coach Rice, Coach Behnke, and Coach Skeete for believing in me.”

Evidently, the potential OU’s coaching staff saw in Williams has come to fruition. The senior track athlete boasts a lengthy list of accomplishments.

Williams is especially proud of breaking three conference records during indoor track season and winning Outdoor Track and Field Athlete of the Year in 2022. However, Williams’ favorite personal achievement was competing in the 2021 NCAA Division I East Outdoor Track Preliminary Round.

“It’s a big deal to compete at preliminaries,” Williams said. “You’re going against athletes who want to go pro.”

Although Williams’ athletic career at OU will come to a close this fall, he has a list of goals he wants to accomplish.

With his athletic goals defined, Williams is uncertain where life will take him after graduating with a Bachelor’s Degree in Criminal Justice from OU. While he plans to put his degree to use, he ultimately aspires to become a professional runner.

“I have options after graduation,” Williams said. “But my dream is to be a professional runner.”

Williams plans to leave behind a lasting legacy on OU’s Track & Field program. His most profound influence resonates within the men’s 4X400m relay team.

Williams is extremely grateful to the OU’s Track and Field coaching staff for providing him with the chance to make his athletic dreams a reality. As he finishes up his final year with the team, Williams finds solace in knowing that his successful athletic career will leave a long-lasting impact on Oakland’s Track and Field program.