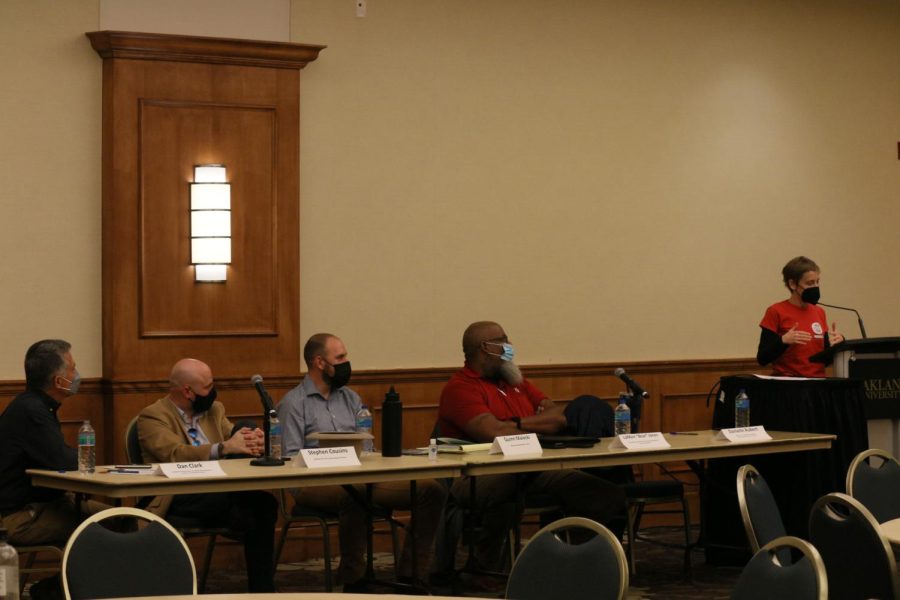 Danielle Aubert speaks during the panel discussion at the Labor United event.

In light of issues surrounding labor unions on OU’s campus especially since the September 2021 work stoppage and the recent unfair labor practice charges between OU AAUP and the university, the purpose of the event was to give the OU community a larger context about the labor movement.

“In the last five years, or more so even two years, there’s been enormous changes in the labor movement, and so hopefully we’ll be able to give people a window into trying to understand what happens when they suddenly confront labor unionizing at their local coffee shop, or what happens when workers go out on strike, why do teachers go out on strike, and all those kinds of questions,” OU AAUP President Karen Miller said.

The intentions to educate not only surround faculty and staff, but also OU students, a concern particularly important to the OUSC. In spring 2021, the Oakland United Student Workers Coalition (OUSWC) advocated for student jobs.

“The big message is having conversations about collective action, having conversations with other employees and talking about wanting to have improved working conditions, wanting to have more say in your workplace … We want to encourage people to have those conversations. We want to encourage people to have a voice in their workplace and how things run and not be scared to approach their bosses,” OUSC Student Body President Andrew Romano said.

In addition to the discussion and Q&A, there was a raffle for students to win Chartwells gift cards, as well as snacks and swag. Free water bottles with symbols that represent the solidarity between OU AAUP and OUSC were also available.

While this was OUSC and OU AAUP’s first co-sponsored event, the two organizations hope to team up for more initiatives in the future that can inform and help the campus community.

“We are hoping to create a more interactive community on campus,” Miller said. “COVID has been very hard on all of us, and so we think that Oakland has enormous potential. We think one of the best ways to develop that potential is by creating a good working relationship between the students and faculty. We should start thinking of ourselves as a community.”