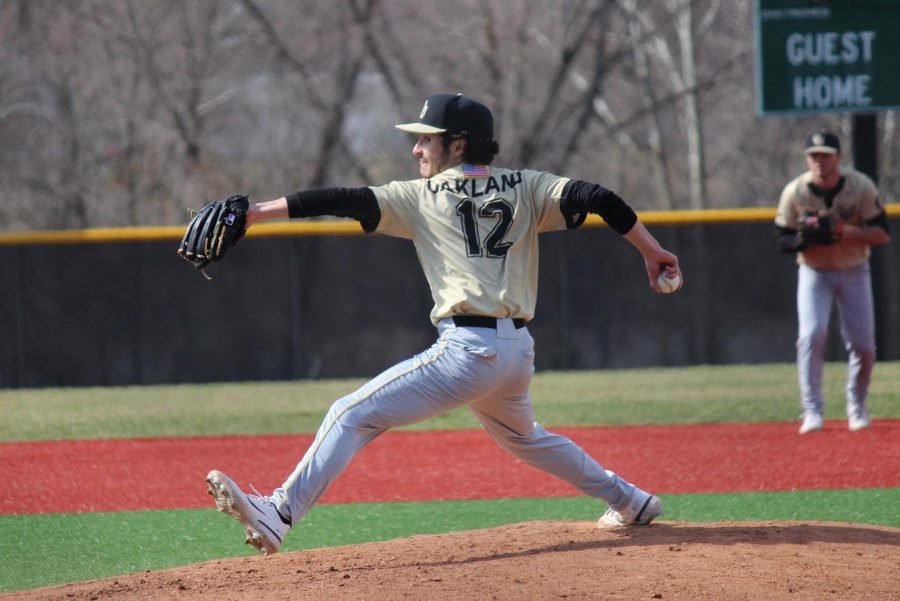 The Oakland baseball team suffered its second sweep of the season this past weekend, dropping three games in two days to Southern Illinois University Edwardsville.

After the schedule had to be adjusted due to inclement weather, Oakland and SIUE took to the diamond on Sunday afternoon for a double header, followed by the series finale on Monday afternoon.

The Grizzlies dropped the series opener to the Cougars, 5-2, on Sunday afternoon.

Oakland struck first in the top of the first, when senior Gabe Lux went deep to give the Grizzlies a 1-0 lead.

The advantage didn’t last long, however. The Cougars rallied for three runs in the bottom of the second inning to take a 3-1 lead.

Oakland tacked on one more run in the top of the third inning. Seth Tucker scored on an RBI single from Brad Goulet, to bring the Grizzlies within one, 3-2.

The visiting Grizzlies couldn’t manage to bring plate any other players, and another two runs from the Cougars in the bottom of the seventh inning didn’t help Oakland’s case either.

Ultimately, the Grizzlies fell, 5-2. Redshirt senior pitcher Jacob Wosinski suffered the loss for the Grizzlies, his second of the season.

Oakland looked to rebound later Sunday night, but fell once again to SIUE, 8-4.

The Grizzlies got on top early with three runs in the top of the first inning. Lux put Oakland on top right away with his second home run of the day.

The Cougars added one run in the bottom of the first inning, but the Grizzlies still maintained a two-run lead.

Things unraveled for Oakland in the third inning. The Cougars plated four in the bottom half of the third, taking a 5-3 lead.

SIUE added three more runs in the bottom of the fourth inning. The Cougars took a commanding 8-3 lead heading into the home stretch.

Oakland could only muster one run in the top of the seventh inning, and dropped game two of Sunday’s double header, 8-4.

The series finale took place on Monday afternoon, and Oakland dropped yet another game, this time in a more valiant effort.

Once again, the Grizzlies got on top early, recording four runs in the first three innings. Luke Malmanger singled in the top of the second inning, scoring Ian Cleary.

Then, in the third inning, Tucker scored on a Goulet double. Moments later, Post flew out to center field, and Lux scored. Goulet then scored on a wild pitch to put the Grizzlies up, 4-0.

SIUE evened up the score in the ensuing innings, and the teams traded runs. Oakland rallied once again in the seventh inning, with five Grizzlies crossing the plate.

Highlighted by Tucker’s two-RBI single, the Grizzlies took a 10-7 lead before the seventh inning stretch.

Oakland’s bullpen struggled to keep the Grizzlies in front. The Cougars tied the game at 10 in the bottom half of the seventh, and took a 13-10 lead in the eighth inning.

Down three with three outs to go, Oakland got two runs off a Thomas Green two-run home run, but couldn’t find a third run, and fell to the Cougars, 13-12, for the third time in two days.

The Grizzlies are now 3-10 on the season after what has been an unkind nonconference schedule.

Oakland’s home opener will be on Wednesday, March 16 at 2:30 p.m. against Rochester University.