The Return of the Battle of the Bands 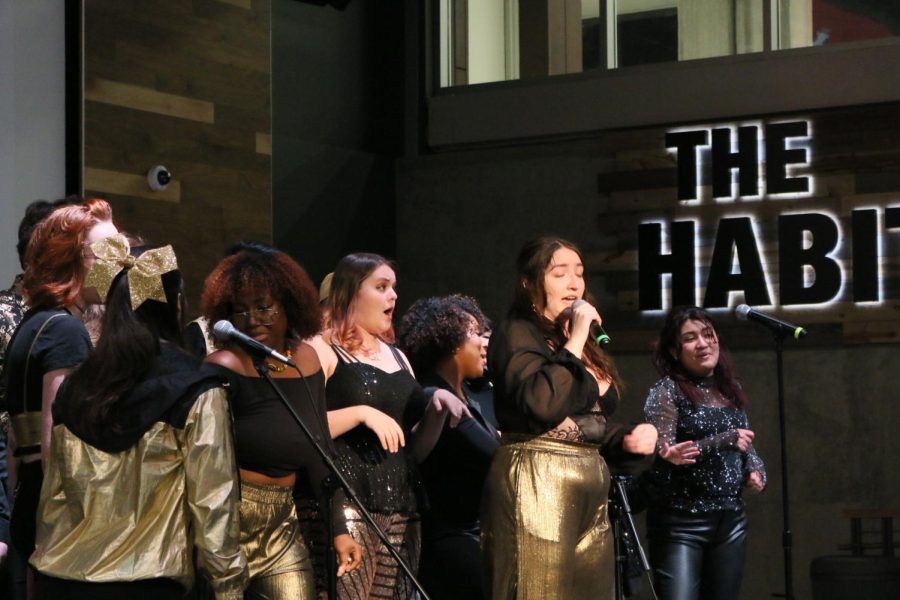 Battle of the Bands returned to the Habitat after a two year hiatus last week.

The Battle of the Bands competition, hosted by the Student Program Board (SPB), returned to the Oakland Center this past Wednesday.  Five bands, spanning vastly different styles, duked it out for the chance to play at the annual spring concert as an opener for Tai Verdes and Peach Tree Rascals.

In the lead-up to the concert, students filled The Habitat eagerly awaiting to hear live music. After a short ten-minute delay, the event began.

The first act to take the stage was the classic rock tribute band Set N’ Stone who played a lively set of self-proclaimed “dad rock.” Next up was the metal band Apota, who played original anti-war songs alongside a cover of “Zombie” by the Cranberries. Following them was Confidence, an R&B group fronted by the energetic rapper Rockim Williamson. The last band, Living Ai, played a set of original songs inspired by Japanese rock and Midwestern Emo music.

The final act of the night was OU’s own a capella group, the Gold Vibrations, who compared their act to the film series “Pitch Perfect.” All of the acts were able to capture the attention and admiration of the student body in attendance.

There was an incredibly cooperative atmosphere as members from different bands exchanged words of encouragement after each performance and networked with each other.

Nikolas Kaljaj, the lead guitarist of Set N’ Stone and a future OU student gave his thoughts on the importance of friendly competition saying, “I’m not the hugest fan of [battle] of the bands, I think we should all be a community. I like the concept of pitting bands against each other but I don’t think there should ever be any ill will, it should all be in good faith.”

This good atmosphere could not have been possible without the SPB organizers who planned and hosted the event. Daryl Blackburn, the coordinator of leadership and service programs within the office of student involvement and the emcee of the event talked about why the organization put on the event.

“We like to get students involved and to cheer on their own fellow students,” Blackburn said. “Each band has at least one Oakland student, so it’s all about getting the names of their bands out there. We’re very happy about the turnout, we’re excited, we have a really good lineup, we’re happy to be back, it’s been a great night.”

The big winner of the night, as voted on by the audience, ended up being the Gold Vibrations.

Jazz Pittenger, the president of the Gold Vibrations, gave her thoughts on the victory saying, “Honestly it’s very bizarre, we were not expecting to win at all. We barely knew if we were going to make it to this performance and be able to come out and sing for everybody, so it’s a very pleasant surprise.”

Pittenger also talked about the other struggles leading up to this performance and where the group is going from here.

“We are very excited to be back singing,” she said. “We were out for a while because of COVID-19, we even rehearsed in a parking garage during the fall of 2020 in freezing weather. We have an upcoming concert sometime this spring along with our auditions for the fall 2022 lineup.”