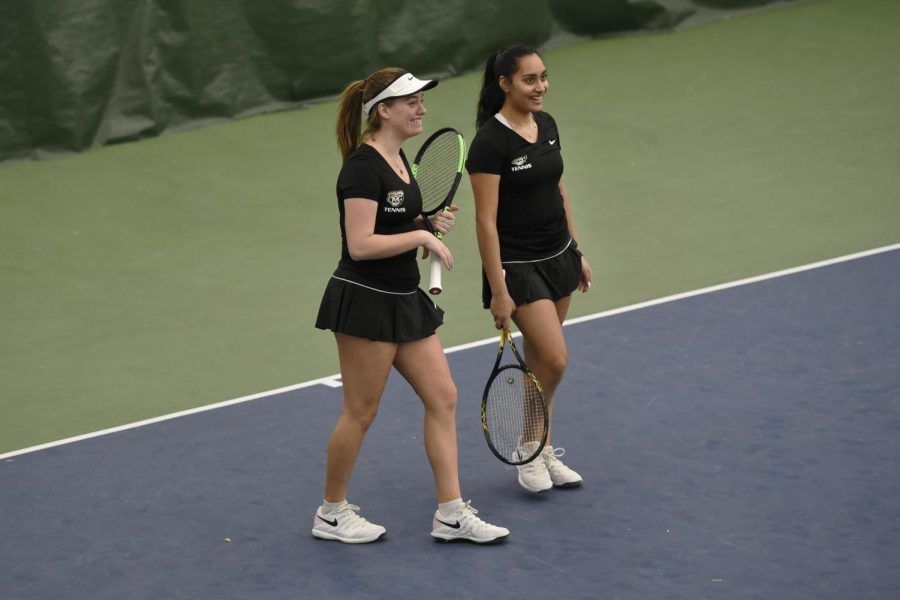 Yasmin Glazbrook and Nirva Patel were recently recognized for their achievements during the Oakland tennis team's recent trip to Florida.

The Golden Grizzlies’ tennis team finished up their five game Florida trip with a 3-2 record, notching wins over the Bethune-Cookman Wildcats [6-1], the University of Mary Marauders [6-1], and the Eastern Michigan Eagles [5-2] after taking their first loss to the Stetson Hatters [7-0] and dropping the last game of the trip in a loss to the Augustana College Vikings [4-3]. The biggest help over the course of the trip had to be the perfect four-game stretch put together by Glazbrook and Patel, who didn’t lose a single matchup.

Influential in the dominance that the Golden Grizzlies displayed over the course of the trip, the pair of Glazbrook and Patel were also dominant in individual competition. During the Bethune-Cookman game after securing the doubles win with Patel, Glazbrook earned a 6-3, 6-4 win to sit at the number two spot in the rankings.

The Golden Grizzlies’ win over the Eagles also counted as a measure of revenge in the long-standing rivalry between the two schools. The Eagles hold a history of dominance over the Grizzlies, entering the competition with a 13-1 record. The win moves the Golden Grizzlies to 2-13, breaking a three-game losing streak in the process.

Despite the overall loss to the Augustana Vikings, Glazbrook and Patel would not break their perfect streak over the trip, defeating their matchup with a score of 7-5 to notch the number one spot. The Golden Grizzlies’ record over the Florida trip improved to 3-3 before falling to 3-4 by the end of the trip.

Another bright spot in the trip is that the three wins helped the Golden Grizzlies surpass their record from last year, as they went 2-18 for last season. Despite such a season last year, this isn’t the first time that Glazbrook or Patel have been given praise for their play, both individually and as a duo.

Individually, Glazbrook notched five single wins in the 2020-2021 season, defeating her matchup with the Eastern Michigan Eagles twice, the IUPUI Jaguars twice, and the Northern Kentucky Norse once. Patel has been named the Nike Horizon League Women’s Singles Player of the Week during the same aforementioned season after notching a perfect 2-0 record, helping the Grizzlies win their first two matches of that season over the Jaguars.

Together, however, both Glazbrook and Patel have been recognized as a top-tier duo before, leading the school team in the number one doubles spot with a record of 5-6 after notching their wins against their matchups with the Ball State Cardinals, the IUPUI Jaguars, and the Northern Kentucky Norse and two wins coming against Eastern Michigan Eagles.

The tennis team will look to continue this run of relative success against in their first home match of the season against the Lake Superior State Lakers on Saturday, March 19 at 4:30 p.m.  at the Oakland Tennis Courts.