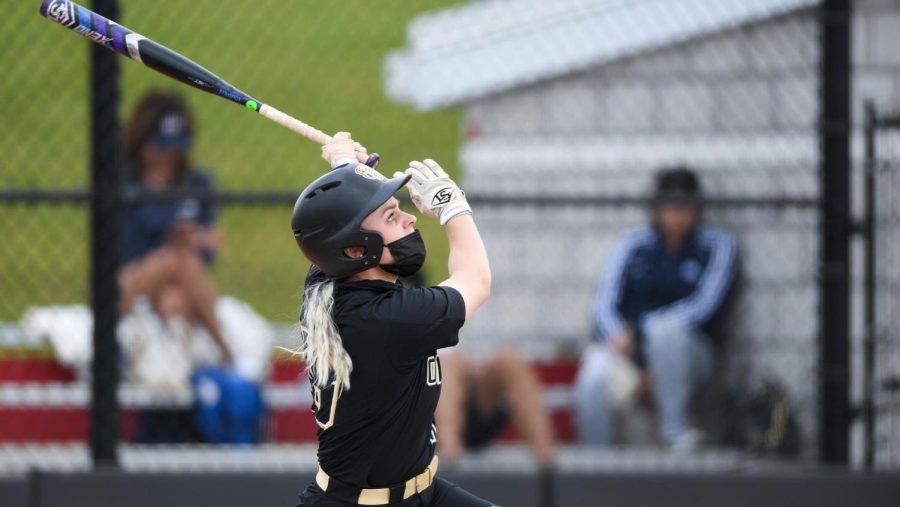 Despite this strong start, OU’s 2-0 lead did not last long. With two players on base in the second inning, Maddie Lacer fired a hit to center field, allowing Hannah Colbert to score for the Norse.

With the Norse on the board, a defensive battle ensued. The next three innings remained scoreless, even as the Norse put up an offensive battle. Although pitcher Sydney Campbell allowed the Norse 10 hits, the Golden Grizzlies fielding stayed cool.

The second game in the doubleheader started off bleak for the Golden Grizzlies. Early in the first inning, Jordan Jenkins ripped a hit to left field, allowing Ella LeMonier to score for the Norse.

The Golden Grizzlies powered back in the third inning, tying up the game 1-1 with a homer from Madison Jones. Jen Krizka continued OU’s rally with an RBI to right field. The Norse quickly regained their lead with a two-run homer in the fourth inning.

The Golden Grizzlies allowed the Norse to retain their 3-2 lead until an incredible sixth inning comeback. With back-to-back errors from the Norse, the OU team picked up two runs from Shannon Carr and Jessie Munson.

OU continued the inning with explosive RBIs from Madison Jones and Cammie Brummitt. The Norse struggled to match this offensive finesse, allowing the Golden Grizzlies to pick up their second win of the series with a score of 6-3.

The Norse were determined to keep the Golden Grizzlies from achieving a clean sweep. Northern Kentucky came out strong with a two-run homer in the first inning. The Golden Grizzlies remained scoreless until Lauren Griffith beamed an RBI double to center field, allowing Maci Brown to score.

Still down 2-1 at the beginning of the fourth, the Golden Grizzlies fired up their offense. Cammie Brummitt brought Madi Herrington home on an RBI single to tie up the game.

Lauren Griffith stepped up to the plate and hammered a two-run RBI double to give the Golden Grizzlies a 4-2 lead. The Norse fought back hard, picking up runs in both the fourth and sixth innings to tie the game up at 4-4.

This comeback only added fuel to OU’s fire. The Norse allowed the Golden Grizzlies to load the bases at the top of the seventh. Madi Herrington hit a sacrifice fly to bring Lauren Griffith home. As the Oakland team took the lead once again, the Norse seemed to run out of steam.

The Golden Grizzlies secured the win with a score of 5-4. With their first series sweep, the Oakland team begins their 2022 season with a perfect 3-0 Horizon League record.

Oakland will play their next game at the University of Michigan at 4 p.m. on March 16. This game will surely be a ‘battle of the bats’ as the U of M team is well-known for their finesse pitchers. Oakland must be prepared both defensively and offensively as they handle the strong-willed Wolverines, a team that has yet to lose a game on their home turf.