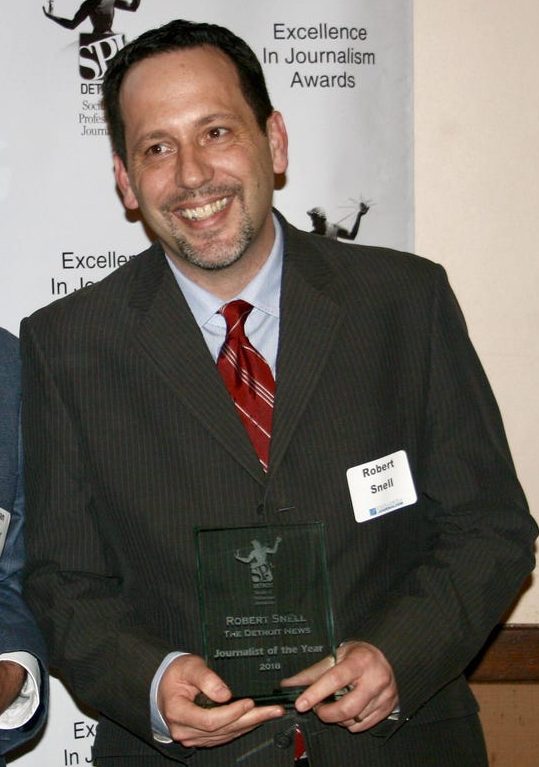 Photo courtesy of the Detroit News

OU alumnus Robert Snell was voted Journalist of the Year by the Society of Professional Journalists in 2014, 2018 and 2020.

Since graduating from Oakland University in 1996, Robert Snell has made a name for himself as one of Detroit’s most respected journalists. Snell’s journey at OU began after a chance meeting at a journalism convention with former advisor of the Oakland Post and former director of the journalism program — Jane Briggs-Bunting.

After Briggs-Bunting recruited him to transfer to OU from community college, Snell thrived under her tutelage and learned many lessons which he still applies to his work today.

“She instilled in us that you have the right to information. That was a big part of her life and that was in turn a big part of her students’ lives,” Snell says. “That was how we operated every day at the paper. We’re gonna have a nice mix of news — sports, entertainment, opinion — but we’re also gonna have very strong news and we’re going to be aggressive about gathering it. That’s still my mindset 26 years later, and a lot of that is due to Jane.”

After serving as Editor-In-Chief for two years at the Oakland Post, Snell graduated and took jobs at publications such as The Voice in Macomb county and the Lansing State Journal before being hired by The Detroit News in 2006.

At The Detroit News, Snell covers federal courts, federal agencies and stories of corruption in the city. He was also the lead reporter covering Detroit’s 2013 bankruptcy case and led coverage of the historic collapse and bankruptcy of General Motors — Snell has always been drawn to stories of this nature since his career began.

“[The] basic fundamental role of the newspaper is to let people know, here’s how your tax dollars are being spent,” Snell says. “It’s always been fascinating to learn about people who don’t do things the right way and let readers know about it.”

Snell also finds it rewarding to be able to cover stories that so many people can relate to and that make a broad impact. He cites his work on the United Auto Workers (UAW) corruption case as an example.

“If you’re in the auto industry, odds are you are a union member. You’re getting money withheld from your paycheck, every paycheck, and a certain amount of that money is going to the UAW,” Snell says. “Here’s an example of numerous UAW leaders taking that money and buying themselves expensive alcohol, fancy clothes, golf clubs and taking trips to exotic cities around the world with your money. You don’t have to really work too hard to explain to people why this is important or significant.”

Snell’s hard hitting journalism has not gone unrecognized by his peers. He was voted Journalist of the Year by the Society of Professional Journalists in 2014, 2018 and 2020.

“To get some recognition from your peers feels really good,” Snell says. “It’s genuine and it’s just a really good feeling. I definitely appreciate it and I don’t take it for granted.”

Snell’s work for The News includes controversial stories. In March 2018 after the Detroit Lions hired Matt Patricia as head coach, Snell broke a story based on court documents that showed Patricia had been indicted by a grand jury for sexual assault in 1996 while a college student. Patricia denied the allegation. The plaintiff subsequently declined to testify and the case was dismissed.

In June 2021, Snell wrote another story based on court documents from 2007 that connected professional golfer Phil Mickelson to a $500,00 wager with a Detroit bookie. Mickelson, in Detroit for the Rocket Mortgage Classic, expressed anger at the timing of the article and said he would never return to Detroit to play.

Snell’s achievements in journalism highlight the importance for journalists to cover, and uncover, the key issues of our time and hold public officials accountable when necessary.

“I think [journalists] are by and large watching what elected leaders, politicians, people in offices of public trust — watching what they’re doing, how they’re spending our money and how they’re making decisions that impact people’s lives,” Snell says. “There’s not a lot of people beyond the media that are doing that and are able to devote their lives to keeping track of how tax dollars are being spent and how politicians are making decisions that impact real people.”