Letter to the editor: There is still a lot to learn about the Ukrainians 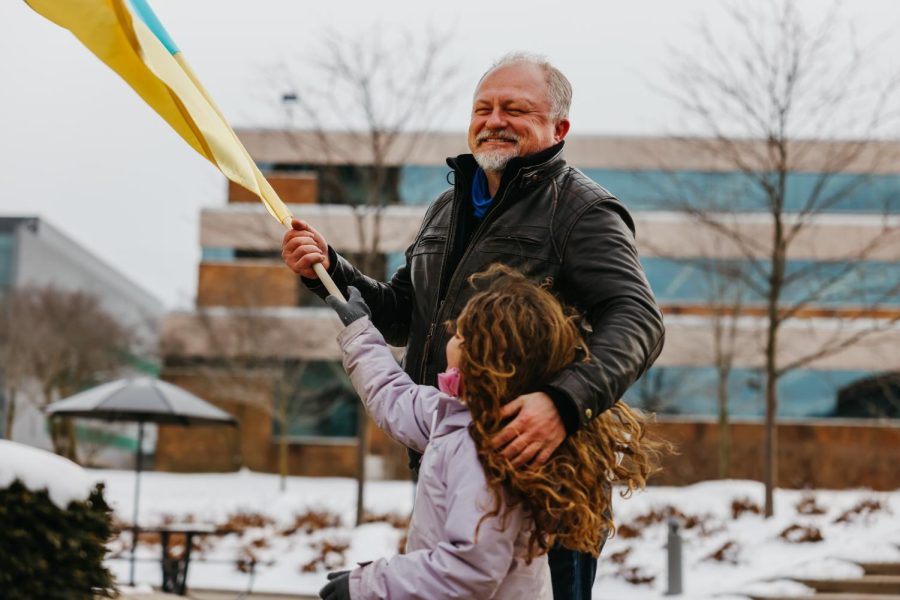 Professor Taras Oleksyk at Friday's "Light the Candle for Ukraine" ceremony outside of Elliott Tower.

Some time ago, I put a yellow and blue Ukrainian flag on my house in Rochester Hills.  A neighbor walking her dog asked me: “I like that flag; we googled the colors already.  Are you from Ukraine?”

Despite all this, only two weeks ago, many still did not know that my native country even existed.  Then Russia started a war – a brutal, ruthless, bloody war that taking place right in front of our eyes with residential buildings destroyed, millions of refugees fleeing the country with little possession and not knowing what to expect, thousands of casualties lost, many of them children that died from wounds and dehydration, where even expecting mothers have blown off in maternity wards by deliberate artillery bombardments.

Because of the war, it is difficult to find anyone around who has not yet heard of Ukraine, who is not yet aware about the war that is fought here. The line between good and evil has been drawn as clear as it can ever be, and it seems like it is easy for the good people to act.

It may sound easier than it sounds. We have been standing at the information table every day for the last week and we can see the support that comes from all the good people. Americans who came to talk to us are inspired by the Ukrainian resistance, which they see as a struggle of David and Goliath.

Still, it is evident that many have little idea about why this war is fought. Understandably, most of the people get their information from the cable news where they see American experts trying to digest what is happening now in Ukraine. The problem is the experts appear to be completely confused about this war as well.  Why are they confused? This is why we are here.

The first reason is that this war has no clear equivalent.  The academics try to reach out to historical examples that have been trained on and keep drawing blanks – there is just nothing there. This is not like the Iraq war because Ukraine has no oil.  This is not like WW2 because Putin has the nukes.  This is not like Afghanistan because the majority population seems to be on our side. This is not like the cold war because the adversary does not have communist ideology.  It is not like North Korea because Russia does not need money to get attention, it needs it to expand its control. This war is clearly unlike any other America has fought, one thing is clear, Ukraine is fighting a just war, and Americans should not be afraid to stand on the right side of history.

The second reason is that the rules keep changing. While American politicians are figuring out how crazy Putin is and get into diplomatic debacles with Poland about the most legal way to supply Ukraine with military aid, trying to decide a way to bring lethal weapons in a way that won’t make Putin more upset, Russians are shooting rockets at Ukraine from the neighboring country of Belarus undeterred by any such constraints.  While Russia disregards any rules and throws every possible resource, including foreign fighters from Syria, the US keeps making “we will never get directly involved” statements, thereby painting itself in a corner by denying potential options. I am sure Russia is listening and planning accordingly. The message is clear, you cannot win the chess match with someone who is willing to shoot you in the face.

The third reason is that the American public seems to know very little about the Ukrainian people.  Even though almost a million of Ukrainians live in the US, we have generally been defined as a version of Russians.  This view has been reinforced by the media and scholars alike who studied Eastern Europe in the context of WW2 and the Cold war, where the focus of attention was the empire centered in Moscow, whether it was called Russia or the USSR.  Even the western media trying to save on cost, reported on Ukraine from bureaus in Russia further enhancing the bias.  The result is that Americans do not understand Ukrainians, and consequently keep underestimating them.  Believe me, we will win this war no matter what and we will write the new history, where, finally, what is right makes the might!

After two weeks of war, David stood up to Goliath and gave it a bloody nose. Undeterred by the examples of history that may not be in their favor, Ukrainians keep fighting and keep inspiring the good people around the world.  Unimpressed by the huge armies of the enemy they stand their ground upending every expectation of defeat.  Soldiers and civilians alike, they are all resisting, with weapons or with their bare hands, and they will not stop until Ukraine is cleared free from the invaders, no matter what the cost is; even if that is the most thing that the world needs to learn about the Ukrainians.

I am Ukrainian born in Ukraine, a country with rich culture, unique traditions, and ancient history.  My people are the descendants of the those who came to settle, to live and to love their and over the thousands of years, it is part of our very heart and soul, and we cannot and will not give it away. We have seen many invaders come and go, but we survived them.  Will survive this evil too.  Ukrainian people are resilient, we are stubborn, and we are united more than we have ever been to defend our country.

This is not only the Ukrainian war, but also your war too.  We believe in the same things.  Our goal is freedom, but not only our own, we fight your freedom too, because if we fail, tomorrow, the enemy will come to your gates.  Then who will be defending you?

Remember, when good people do nothing the evil triumphs!