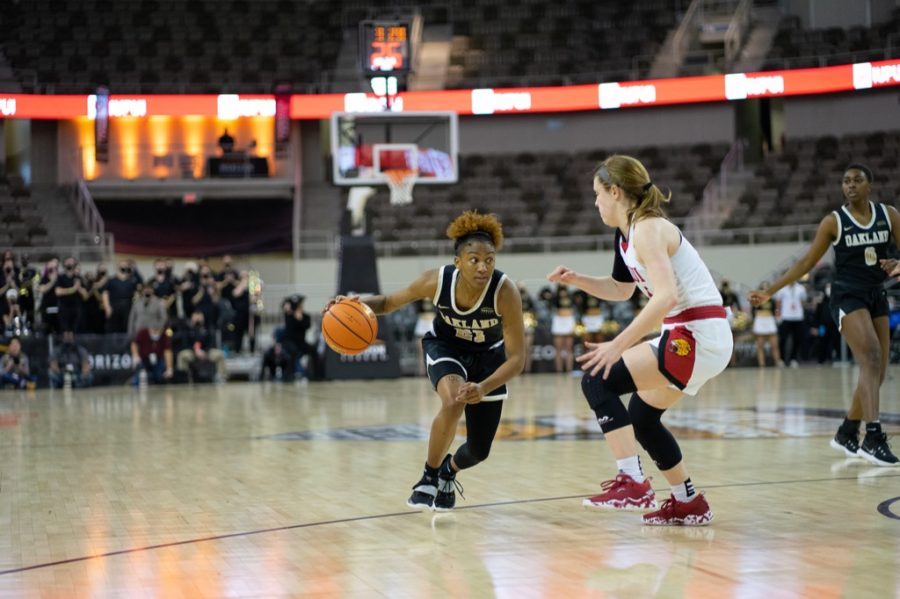 Kahlaijah Dean put the team on her back with 24 points on Monday afternoon against IUPUI in the Horizon League Tournament semifinals.

The Oakland women’s basketball team fell to the IUPUI Jaguars, 86-63, in the Horizon League Tournament semifinals on Monday afternoon at the Indiana Farmers Coliseum.

Oakland looked to play spoiler once again on Monday afternoon against IUPUI after defeating No. 2 seed Youngstown State last week. However, this affair did not end the way the Grizzlies would have liked.

The Grizzlies had an impressive showing in the first quarter. Kahlaijah Dean had seven points in as many minutes, and Kayla Luchenbach added six points on 3-4 shooting to give Oakland a 23-22 lead after the first quarter.

Oakland’s lead quickly dissipated in the second quarter, and the Jaguars took full control. The Grizzlies struggled to find the bottom of the net, and found themselves playing from behind for the rest of the game.

Dean and Breanne Beatty were the only Grizzlies to score in the second quarter, with seven and five points, respectively. Oakland shot just 39% from the floor in the first half, compared to IUPUI’s 60% mark, ultimately putting the Grizzlies in a 10-point hole at halftime.

The second half didn’t go much better for the Grizzlies, who were fighting to keep their season alive. IUPUI’s leading scorer, Macee Williams, dominated the third quarter, posting 11 points on 5-5 shooting as well as seven rebounds in just eight minutes.

Oakland could not stop the 6-foot-2 senior center, as she put the game out of reach.

The Grizzlies were outscored 22-13 in the third quarter, and were down 19 going into what was, ultimately, the final quarter of the season.

Oakland struggled to get any momentum going on offense, and could not make up any ground in the fourth quarter. The Grizzlies shot 0-10 from distance in the second half, a big reason why a comeback was unattainable.

Williams led all scorers with 27 points on an impressive 13-14 shooting. Dean led the way for the Grizzlies with 24 points, nine of which came at the charity stripe.

Beatty and Breanna Perry also posted double figures for the Grizzlies, with 10 and 11 points, respectively.

Despite the loss, the Grizzlies had some memorable moments this postseason.

The team won its first Horizon League Tournament game since 2018-19, and advanced to its first semifinal appearance in program history.

“It was not the result we wanted, but I am so proud of this team. They have accomplished so much. Through everything I am so proud to have been on this journey with them. Thank you God for the opportunity. Thank you Oakland.”

The Grizzlies finished the season with a 15-15 overall record, and 11-10 in the Horizon League.

Head Coach Jeff Tungate is expected to return for next season, after missing the majority of the 2021-22 season with back issues.

All focus will now be placed on preparations for the 2022-23 season.