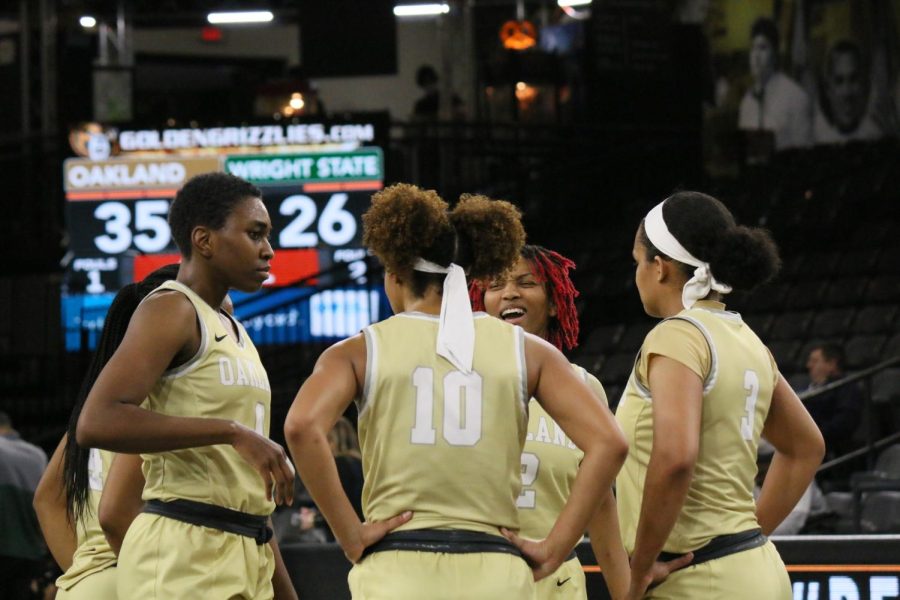 The Oakland women's basketball team had a victorious season opener against Akron on Nov. 7, 2022.

The Oakland women’s basketball team defeated the Youngstown State Penguins in the Horizon League quarterfinals on Thursday night, 63-52 at the Beeghly Center.

The seventh-seeded Grizzlies knocked off the second-seeded Penguins for the second time this season to advance to the Horizon League Tournament semifinals in Indianapolis.

The teams traded buckets throughout the first quarter. Neither squad could muster much of an advantage.

Brianna Breedy got things started early with the first basket of the game, followed by an assist on a Kayla Luchenbach layup.

The rest of Oakland’s starters got involved throughout the rest of the quarter, and each of the five starters recorded two points in the first 10 minutes. Lamariyee Williams added three off the bench for the Grizzlies, who trailed by four after the first quarter.

Beatty nearly single-handedly put the Grizzlies back in front, 27-26, with 4:19 to play in the first half.

Sydney Gouard and Breanna Perry each added buckets late in the second half to keep the Grizzlies in front, 32-30, going into halftime.

Beatty led the way for the Grizzlies in the first half with 13 points on 5-7 shooting and 3-4 from distance.

Both offenses went stagnant to begin the second half. Youngstown State’s Lilly Ritz connected on three layups early to give the Penguins a slight advantage, but a pair of Kahlaijah Dean free throws gave the lead back to the Grizzlies before the media timeout.

Ritz continued to carry the Penguins on her back. The 6-foot-1 senior scored all 12 of Youngstown State’s third quarter points.

However, the Grizzlies were able to maintain their lead, much in part to a pair of 3-pointers from Dean and Kennedie Montue. Oakland led, 46-42 heading into the fourth quarter.

Dean took a page out of Ritz’s book in the fourth quarter. The senior guard put the Grizzlies on her back, scoring all seven of Oakland’s points before the media timeout. The Grizzlies led 53-47 with just 4:45 to play in the game.

Oakland’s stifling defense down the stretch helped stave off the Penguins. The heroic effort of Ritz came up short as the Grizzlies punched their ticket to Indianapolis.

Dean’s monstrous 17-point second half led the Grizzlies to the upset victory. Beatty cooled down after her 3-point clinic in the second quarter, but still added 14 points of her own for Oakland.

Just days removed from their first Horizon League Tournament win since 2018, the Grizzlies have now won two win-or-go-home games in a row to keep their season alive.

Oakland will now head to Indianapolis, just two wins away from going dancing for the first time since 2006.

The Grizzlies will take on top-seeded IUPUI in the semifinal. The Jaguars are 22-4 on the season, and defeated eighth-seeded Robert Morris by 31 points to advance to the semifinal.

Oakland and IUPUI have met twice this season, with the Jaguars getting the best of the Grizzlies in both matchups.

The semifinal matchup between the Grizzlies and Jaguars is set to tip off at 12 p.m. on Monday, March 7 at Indiana Farmers Coliseum.