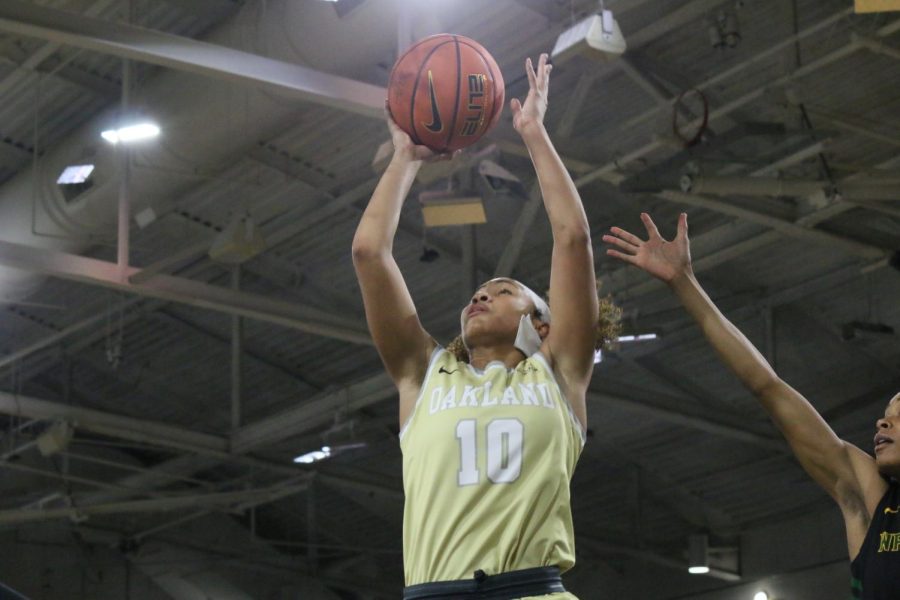 The Oakland women’s basketball team defeated the Wright State Raiders in the first round of the Horizon League Tournament at the O’rena on Tuesday night by a score of 54-45.

Oakland jumped out to an early lead and never looked back, ultimately propelling it to a quarterfinal appearance.

The two teams battled back and forth in the first quarter. Neither team registered a lead of more than five through the game’s first 10 minutes.

After the first quarter, the Grizzlies held onto a slim three-point lead. Breanne Beatty led the way for Oakland with seven first quarter points.

Neither team could find the bottom of the net to begin the second quarter. The teams shot a combined 0-17 from the floor before the first points of the quarter were scored with just 4:15 remaining in the first half.

As scoring continued to be scarce, perhaps the most intriguing moment of the second quarter happened with just 44 seconds remaining when Beatty and Wright State’s Diamond Stokes were each issued technical fouls in a small scuffle.

The teams combined to score just 16 points in the second quarter on 7-30 shooting. Ultimately Oakland headed to the locker room with a 26-21 lead over the Horizon League’s No. 10 seed.

The Grizzlies continued to hold off the Raiders in the fourth quarter. Five different Grizzlies made contributions in the scoring column to maintain a comfortable lead over the Raiders and the game was coming to a close.

Williams had her best game in a Grizzlies uniform, notching a career high in points [16] and rebounds [10].

Folley, Breedy, McQueen, Kayla Luchenbach, Breanna Perry and Sydney Gouard all made scoring contributions for the Grizzlies as well.

The Grizzlies move on to the tournament quarterfinals to face the Youngstown State Penguins.

Youngstown State, which has earned the No. 2 seed in the league tournament, will host the seventh-seeded Grizzlies.

The Penguins have acquired a 23-5 overall record this season, as well as an 18-4 league record.

The Grizzlies last traveled to Youngstown on Sunday, Jan. 30 when they knocked off the then-17-2 Penguins in a thrilling 56-52 victory.

Oakland has played its last game at the O’rena this season. Should the Grizzlies defeat the Penguins, they will make a trip to Indianapolis, Indiana to try to punch their ticket to the NCAA Tournament.

The Grizzlies have a quick turnaround between games. Their second round matchup with the Penguins will tip off just less than 48 hours after the conclusion of their first round victory over Wright State. The game is set to tip off at 7 p.m. on Thursday night.