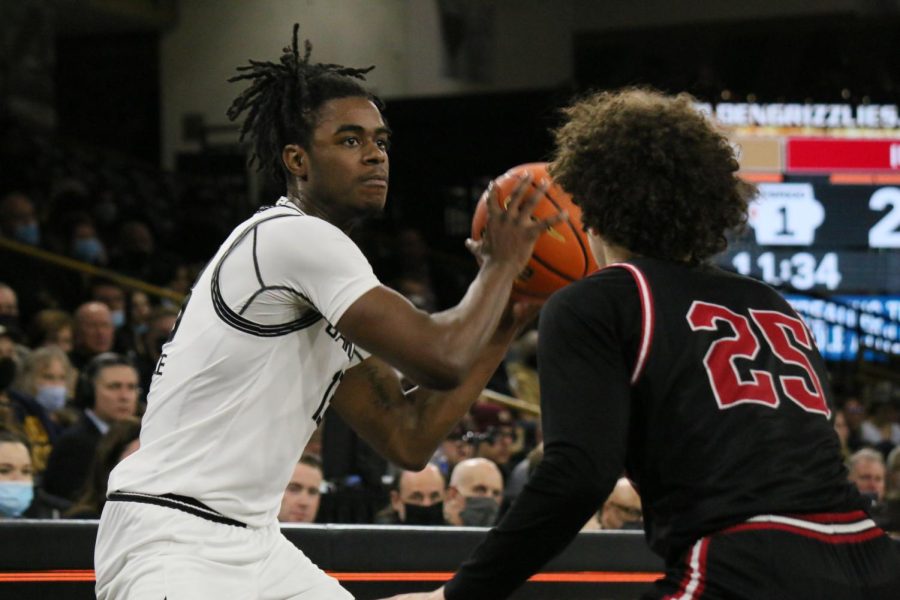 The Oakland University men’s basketball team defeated the IUPUI Jaguars 69-58 in the first round of the Horizon League tournament Tuesday night at the O’rena.

The Jaguars came into this game with just five available players. Trey Townsend got the start in this one for the Golden Grizzlies despite a sprained ankle.

There wasn’t a lot of scoring early on, as both teams struggled with shooting and turnovers. IUPUI, who averaged just over 52 points per game in the regular season, didn’t score until the 16:21 mark in the first half.

Townsend hit a bucket on an and-one followed by a Blake Lampman 3-pointer from the left wing. Oakland led 6-2 at the first media timeout.

Both teams continued to struggle offensively, with the Jaguars shooting a paltry 12.5% at the second media timeout of the half. The Golden Grizzlies weren’t faring much better at 33.3%.

Lampman hit another 3-pointer of the timeout, and IUPUI’s Nathan McClure would snap a scoring drought of over five minutes for the Jaguars with a 3-pointer of his own.

This seemingly got both offenses going. Oakland led 20-11 with 7:14 left in the first half.

Oakland’s poor shooting kept the Jaguars in the game. They shot just 25% from beyond the arc in the first half, and 38.5% overall.

Oakland’s shooting woes carried over into the second half as IUPUI kept hanging around. Just when it felt like they were finally getting some separation, a turnover or a small IUPUI run would keep things close.

The Golden Grizzlies finally started to pull away around the seven-minute mark, with Jamal Cain scoring five straight points to give them their largest lead of the game at 15 points.

That lead would extend even further. A Jalen Moore layup and an Osei Price breakaway one-handed jam pushed the lead to as much as 18.

The Golden Grizzlies were finally able to put this game away in the final minutes. They won by a final score of 69-58.

Cain led the team in scoring with 17 points, with Moore adding 16 and Lampman putting up 14.

Head Coach Greg Kampe said after the game that he was “happy to get a win.”

“We’re a 20-win team [now],” Kampe said. “If you look at our roster, we’ve got nine kids with freshman eligibility. That bodes well for the future.”

Kampe gave credit to IUPUI for playing as well as they did given the circumstances.

“You gotta give [IUPUI Head Coach] Matt Crenshaw a lot of credit,” Kampe said. “I’ve talked about him during the course of the year a couple of times, and that’s unbelievable, the hand that he got dealt and he’s played it as good as you can play—and those kids played their hearts out. They played loose, free and like they had nothing to lose. And they thought they could win.”

Kampe said he hasn’t thought about the next game because of all the crazy things that has happened to the team in the conference tournament over the years.

“You look at the last [several] years, you can’t sit there and think ‘oh we’re gonna win this game,’” he said. “It’s why March is the greatest month of the year if you’re a basketball person. And I’ve been a basketball person for about 50 some years. I haven’t even thought about [the next opponent]. My whole thought process ‘how are we one point ahead one when tonight ends?’”

The Golden Grizzlies will travel to Dayton, Ohio to take on the Wright State Raiders in the Horizon League Quarterfinals on Thursday, March 3.