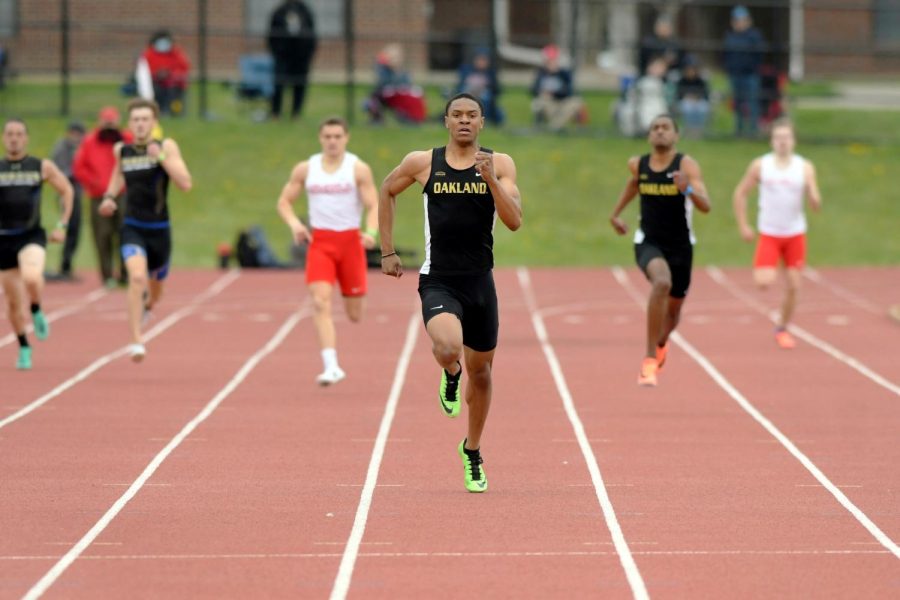 Jimmie Williams (front and center) is headed to the NCAA Indoor Track and Field Championships after his record-setting performance. Photo courtesy of OU Athletics.

During the Horizon League Indoor Track and Field Championships, held in Youngstown, Ohio on Feb. 26-27, both the women’s and men’s Golden Grizzlies track and field teams turned in admirable performances to capture podium finishes at the end of the weekend. Both teams finished third behind the Milwaukee Panthers and the champion Youngstown State Penguins.

Then, Junior Connor Goetz finished one place shy of the top spot, taking home second place in the Men’s 5000-meter run. His time of 14:18 set both a new personal record and the aforementioned school record [a record which he also previously held].

In the field portion of the first day, Gabriell Cyriax also turned in a solid performance, throwing good enough for third place with a distance of 17.07 meters while Rose Philogene captured fourth place with a respectable mark of 5.63 meters in the Women’s Long Jump.

The second of school records to be broken came during the preliminary race of the Men’s 400-meter run, as Senior Jimmie Williams absolutely destroyed his previously set record by finishing first with a run time of 46.72 seconds. After the first day, the Golden Grizzlies men’s and women’s teams sat at fourth and third place respectively.

From the start of the second day, Jimmie Williams and the Golden Grizzlies immediately set themselves apart from the crowd with their record-breaking performances on Sunday. Multiple athletes broke school, Horizon League, and Youngstown State facility records with their times.

The day started with great performances from Azsah Bradley, Payton Sabourin, and Rose Philogene in their respective competitions, as Bradley placed third and fifth in both the Women’s 60m and 200m dash with respective times of 7.54 and 25.03 seconds, Sabourin placed fourth in the Women’s 400-meter with a time of 56.73 seconds and Philogene captured a third-place finish in the Women’s 60-meter Hurdles with a time of 8.58 seconds.

Then came Jimmie Williams’ record breaking performance in the Men’s 200, where he set the Oakland, Horizon League and facility record with a time of 21.28 seconds. He then proceeded to double and break another school record in the Men’s 400 with a time of 46.54 seconds.

Madi Leigh and Ashley Quinn  captured second and third place finishes in the Women’s 800 run with times of 2:12.49 and 2:12.75 seconds respectively, while Ellie Voetberg placed third in the Women’s 3000-meter run with a time of 9:57 .

Connor Goetz then came in and improved upon his first day performance, with a first place victory in the Men’s 3000 as he posted a time of 4:09.11 . Then came the final record-setting event for the Golden Grizzlies, as the Men’s 4x400m Relay team [consisting of Ray Braziel, Justin Kudera, Gabriel Singh and Jimmie Williams broke three records with their time of 3:10.82.

Williams was named Championship Outstanding Performer for the men, while Voetberg was named Freshman of the Year for the women. Williams will be headed to the NCAA Indoor Track and Field Championships thanks to his outstanding 400 time.

All in all, both Golden Grizzlies teams finished third in the Horizon League Rankings, sitting just behind the Milwaukee Panthers and the hosting Youngstown State Penguins, with all-around amazing and record-breaking performances from everyone involved.