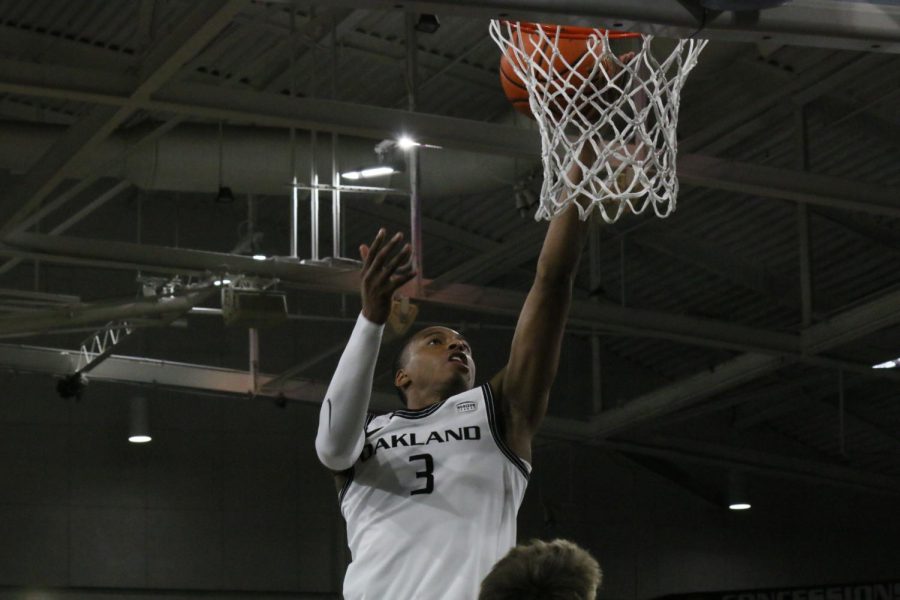 Micah Parrish goes for a layup against Cleveland State on Feb. 26.

In the final game before the Horizon League tournament begins, the Golden Grizzlies showed more flashes of the dominance they’ve displayed for the majority of the season in a gritty 65-57 Senior day win over the Cleveland State Vikings on Saturday at the O’rena.

The first half started off with a series of knotted up scores, as both teams struggled to secure and hold onto a lead early on in the game. The Vikings eventually found themselves pulling away with a slight lead near the 12-minute mark, with the score being held at 15-9 in their favor.

The Golden Grizzlies continued to trail by multiple possessions until the game reached the 10-minute mark, where they successfully got the Vikings’ lead down to one possession with the score sat at 17-15.

The Vikings recollected themselves, and regained possession of their earlier four-point lead with a solid jumper just outside the paint. This effort did not deter the Golden Grizzlies though, as they kept pounding away at the lead until they reached a tie at 24-24 in the four-minute mark of the first half.

Following the tie, the Vikings captured the lead back with a three-point shot, making the score 27-24. Undeterred yet again, the Golden Grizzlies not only tied the game yet again [this time on the back of a Blake Lampman 3-pointer], but ended up going into the halftime break with a three point lead after a Micah Parrish 3-pointer that pushed the lead to 30-27.

Immediately coming out of the half, the Vikings tied up the game at 30 points a piece with a 3-point shot before taking a two-point lead. This lead would extend to five points before the Grizzlies could respond.

The Golden Grizzlies immediately went to work dismantling the Vikings’ lead following two made free throws from Parrish. The game reached a tied score at 37-37 during the 13-minute mark of the second half before one more free throw captured the lead for the Grizzlies.

The two teams then began trading the lead back and forth, after both teams immediately hit back-to-back 3-point shots. The Golden Grizzlies, after minutes of back-and-forth, established a multi-possession lead during the nine-minute mark of the half.

With this win, the Golden Grizzlies secured their 19th win of the season and will now look forward to taking this momentum into the opening round of the Horizon League Tournament, where they will be the No. 5 seed. The next time the Golden Grizzlies will return to the court, on Tuesday, March 1 at 8 p.m., they will be fighting for their opportunity to claim the Horizon League Trophy and a spot in the NCAA men’s tournament.