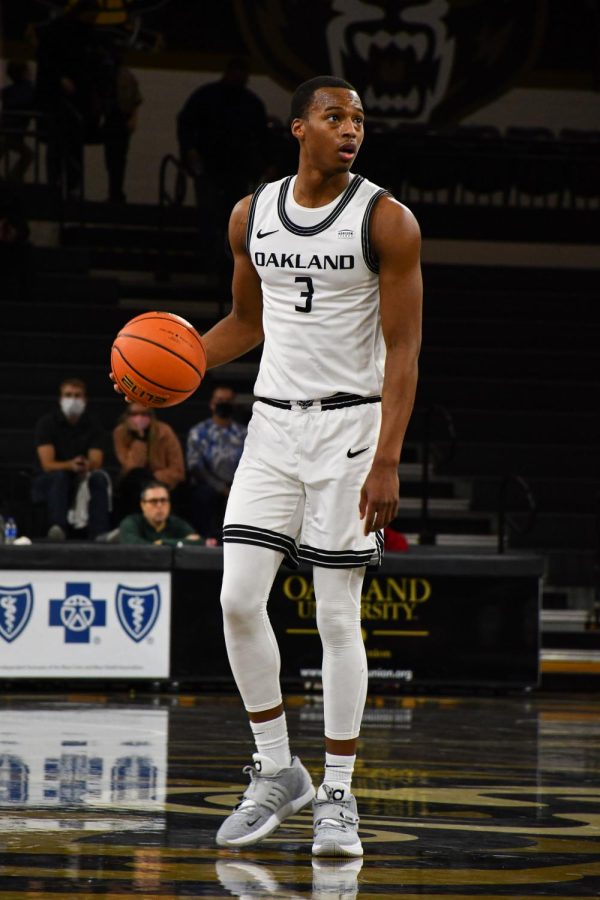 Micah Parrish was second on the team in scoring with 18 points Thursday night.

The Oakland University Golden Grizzlies men’s basketball team falls to the Purdue- Fort Wayne Mastodons 81-70 at the O’rena on Thursday.

The Golden Grizzlies, who dropped two straight games going into the matchup, looked to rebound against a red-hot Mastodons team, who won seven straight and cement themselves in the top two seeds heading into the Horizon League tournament. Oakland looked to catapult into the top four, which would give them the advantage they need to advance in the tournament.

In the first half, Oakland started off strong, jumping to an 18-10 lead, before Fort Wayne locked in defensively and limited the Golden Grizzlies to 13 points in the final 13 minutes of the period. Even with the defense Fort Wayne applied, Oakland played to their strength, leading both teams in points off of turnovers, 14-4, and point in the paint, 24-18, but Fort Wayne’s efficient shooting and excellent rebounding in the first half kept Oakland at bay, and they closed the half 40-31, Fort Wayne’s favor.

In the second half, the Golden Grizzlies played their best half, scoring 39 points, shooting 40% from three, and outrebounding Fort Wayne 17-11. But Oakland couldn’t gain momentum against the sharpshooting rival. Oakland scrapped and dove for loose balls and played through contact, but the Mastodons had an answer for every big Oakland shot, responding with a barrage of threes at a 53% clip. Nearly every run the Golden Grizzlies made was answered for, and, despite their best effort, fell to the Mastodons 81-70.

“I think they played as hard as they could,” Head Coach Greg Kampe said, discussing Oakland’s effort on the court. “I think they panicked a little bit, and other than Alabama, nobody’s done that to us.”

The loss likely takes the Golden Grizzlies out of contention for top-4 seed in the Horizon League tournament, meaning they won’t have a home game.

Despite their loss, Oakland deserves a lot of credit, playing through a number of hard fouls. Forward Trey Townsend, who was bothered by a sprained ankle, pushed to play in the game, but the injury clearly affected him, as he went 0-3 from the field and had no rebounds, which is highly out of character for the amazing talent.

Oakland’s Jalen Moore and Micah Parrish led the team in scoring with 19 and 18 respectively, and Jamal Cain added a double-double with 12 points and 14 rebounds.

Oakland will play its final regular-season game on Saturday, Feb. 26 against the top-seeded Cleveland State Vikings, who fell to the University of Detroit Mercy before coming to the O’rena. Oakland looks to regain momentum against the Vikings, who they beat earlier this season. Unfortunately, they will likely be without Townsend for the game.