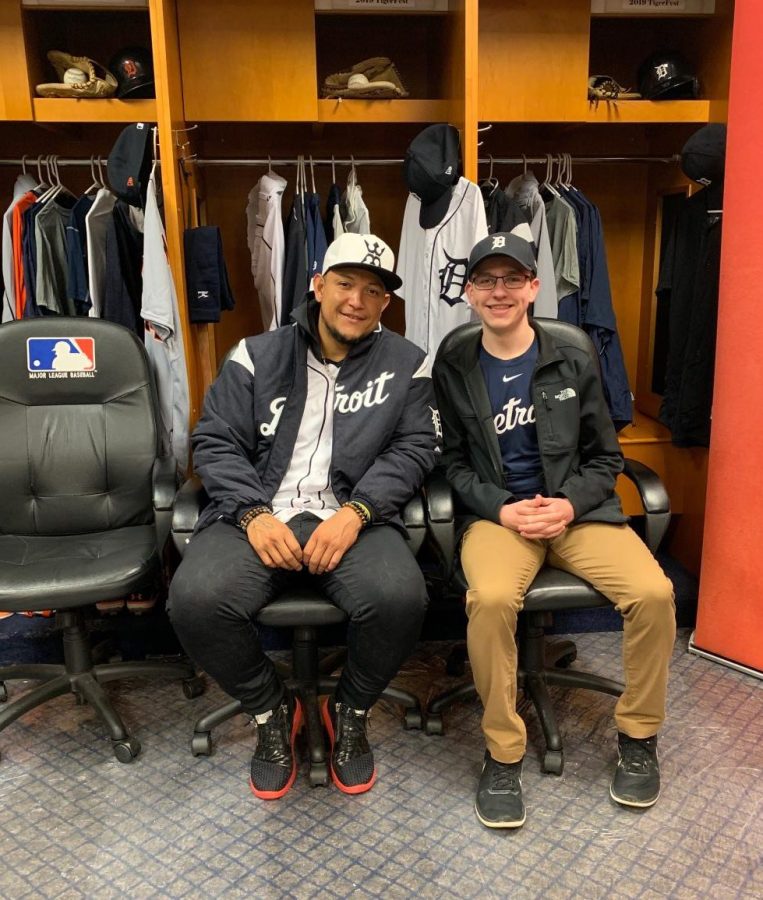 In a world where Detroit sports aren’t necessarily doing amazing things, it can be hard to talk about them while staying positive. But Tony Dombrowski has created a community with which he constantly spreads positivity and joy.

Dombrowski has surpassed 10,000 followers on Twitter since beginning to tweet out all things Detroit sports in August 2017. He has become somewhat of a local celebrity, but he remains humble through the whole experience.

“Always a humbling experience, people come up and want to see me and talk to me,” Dombrowski says. “I want to connect with people more than just at a sports level.”

Dombrowski graduated from Oakland University in 2021 with a Bachelor of Arts in journalism and a minor in digital media production. His big break came at WXOU when he started his own radio show “Trash Talk with Tony Dombrowski”.

“If I could run it back one more time, I absolutely would go back to OU,” Dombrowski says. “I wouldn’t be where I am without WXOU.”

On the show, he would invite a guest or guests on the show to talk mostly about Detroit sports. What started at WXOU is now his own podcast of the same name that is featured on both Spotify and Apple Podcasts.

His show matches exactly with what he offers on Twitter — his honest and positive spin on things.

“I will never go in front of a camera and lie to an audience,” Dombrowski says. “[I] try to stay away from hot take, garbage stuff.”

Dombrowski started making connections early — one of his first connections was Johnny Kane of Bally Sports Detroit. He “slid in” to Kane’s Instagram direct messages (DM’s) asking for advice, and they’ve been not just good connections, but good friends.

Other big connections that Dombrowski made were beat writers for the Detroit teams, including James Edwards III of the Pistons and Max Bultman of the Red Wings.

“I never would’ve imagined I would have connections with beat writers,” Dombrowski says.

On Twitter, Dombrowski is known for things such as his daily “GOOD MORNING” posts and his ongoing shtick with the Tigers about getting a dome for Comerica Park. While his goal was to get big and talk to a community on Twitter, he may not have always expected it.

Besides the Tigers, Dombrowski has good connections with all the Detroit sports teams social media accounts. From posting custom pictures after wins to getting featured in hype videos for the Lions, you can expect to see Dombrowski in any big news story for Detroit.

Dombrowski has recently partnered with Roast Umber — a Michigan based coffee company — that now sponsors all of his Twitter videos. He even has his own code — TonyD — that followers can use to get 20% off at checkout.

“Sponsorship boss at Roast Umber, [he] mentioned the reason why he wanted it (the partnership) is because the world sucks and is negative, but I always have a smile on my face and put a positive spin on things,” Dombrowski says.

“It’s a grind — if you’re not having fun with it then why do it,” Dombrowski says. “Another piece of advice I got was ‘you have your entire life to work so have fun with your life.’”

“One thing I’ve always told myself is I don’t want to get to a point where I say ‘what am I doing,’” he says. “It’s like baby steps, you don’t just graduate and land at ESPN. I feel OU and WXOU did a good job at teaching me that.”