Brianna Breedy: Shooting for her dream 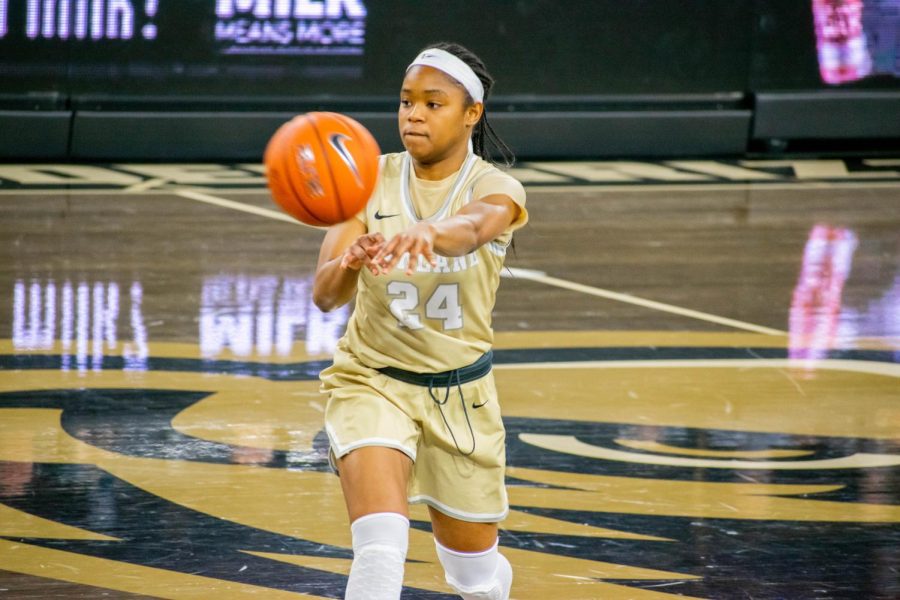 Point guard Brianna Breedy is a senior this year, with hopes to become a physical therapist.

Killing two birds with one stone when it comes to sports and academics? Easier said than done. Brianna Breedy, however, has done so during her time at Oakland University both as a student and an athlete.

“The last couple of seasons have been good there’s been a lot of ups and downs, but overall, it has been a great experience,” Breedy said.

Influenced by her father, a former college basketball player, she was first exposed to basketball at the age of three. Her passion for basketball started soon after. Later in her life, when she attended a sports camp where she played basketball, she absolutely fell in love with the sport, which led her to start playing competitive basketball when she was in fourth grade.

Breedy graduated from Pickering High School in Ontario, Canada, where she was ranked number one point guard in the class of 2018 and top ten player by Crown Sports. She also led her team to three Division I Provincial Regional Championships.

“Obviously, being from Canada, the culture is a little different,” she said. “But for me, I think the hardest challenge is not being around my family and only getting to see them a couple of times a year. I am really family-oriented so not being around them was hard.”

Despite the long distance between her and her family, Breedy had supportive teammates, coaching staff and school friends who made her college life more special and meaningful.

During her time as a college basketball player at OU, she has accomplished numerous achievements. Scoring her career-high 16 points against University of Illinois Chicago during the 2020-2021 season, five rebounds against Jacksonville State University, six double-figure scoring games and nine games with five-plus assists, just to name a few.

As the highlight of her basketball career at OU, Breedy chose the away game against Toronto when her team went to Canada in the summer, and played in exhibition games – homecoming games. For the Canadian Breedy who doesn’t get to have her family as the audience often, this game was a special one as her family had the opportunity to come to the game to see her play.

“It was great to play around my friends and family who would never get the chance to see me play if it wasn’t for the opportunity,” Breedy said.

Her skills and commitment, however, does not only stand out in basketball. It also does in academics. With a current GPA of 3.99 and the four-time academic honor roll selection title, she has efficiently managed her time between her sport and academics, and has paved a successful pathway to become a physical therapist one day.

“I have to credit my work ethic and my discipline on why I have been able to do so well,” she said.

Wrapping up the last season of her college basketball career, she hopes for her team to win the Horizon League Championship, and play in the NCAA tournament.

After graduation, Breedy is going to stay at OU for the Doctor of Physical Therapy (DPT) graduate program in preparation of beginning her career as a physical therapist.

“I knew I wanted to do something in the medical field, and I loved sports so I wanted an occupation that was a mixture of both,” she said. “Basketball did have an impact [as] I have dealt with many therapists and they have been positive experiences.”

Her college basketball career may soon be over with her graduation, but her passion in this sport does not. She plans on continuing to play basketball in her free time, and coaching aspiring basketball players in the community.

“I am definitely going to continue to play basketball in other ways,” she said. “I definitely want to join a league. I also want to try to stay connected with my teammates so I, going to try to make it to all the home games. Also, I currently coach middle school girls, so I may continue doing that as well.”