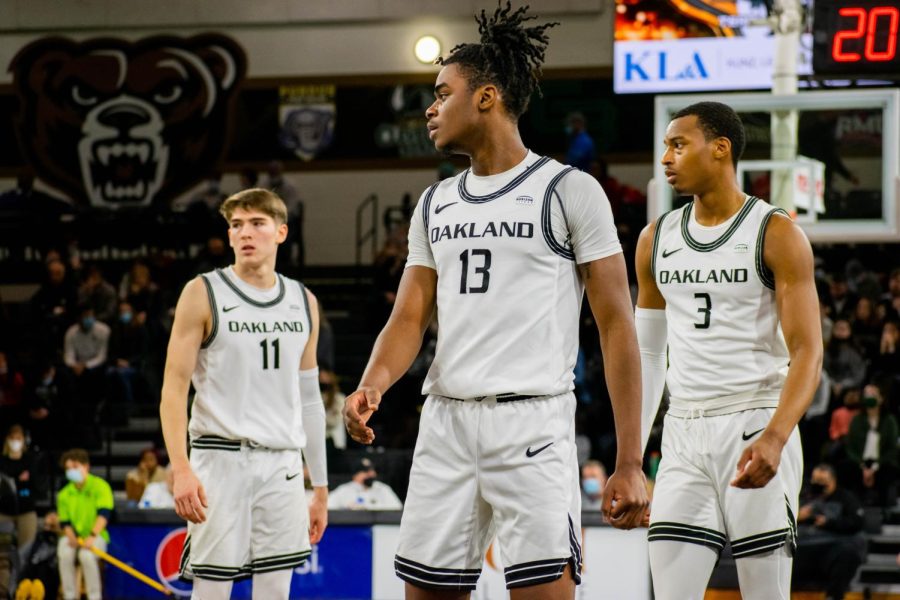 The Oakland Golden Grizzlies men’s basketball team held on late while on the road to capture the win against the Robert Morris Colonials with a score of 71-68, in a win that went down to the last second. The win snapped a three-game losing streak for Oakland.

The first half of the game started off with a huge burst of energy from the Golden Grizzlies, as they immediately jumped out to a 10-3 lead within the first four minutes. The game quickly became more competitive as the minutes wore on. The Colonials caught up rather quickly, and the race was on.

The Golden Grizzlies extended their lead to eight points with a score of 17-9 before the Colonials proceeded to catch up again. This trend of back and forth continued until the Colonials caught and kept their first lead during the waning minutes of the half.

This trend would continue all the way until the final seconds of the game, where the Colonials only trailed the Grizzlies by one point. On the back of two free throws made by Jamal Cain and a Jalen Moore steal, the Golden Grizzlies held onto their lead to leave the game with the win on a score of 71-68..

In #GrizzVision, Head Coach Greg Kampe praised the effort shown by the players during this road trip, saying,

“We needed that, man. Boy, we needed that win and we got it. Nothing’s gonna ever be easy, nothing that’s worth anything, but to get out of this with all those road games and how weary and everything we were, we came out on fire. We got up to a seven or nine point lead…we played pretty darn good and we hung on by the skin of our teeth.”

Usually, what tips the balance in close games like this is the rebound battle. The team who wins the battle of the possessions usually controls the balance of a close game. Despite winning this by a staggering 11 board advantage [the Colonials recorded 38 rebounds to the 27 boards for the Grizzlies] , the Colonials still lost this one narrowly.

The Grizzlies will return to the court on Friday, Feb. 18 at 9 p.m. to face off against the Wright State Raiders at the O’rena.