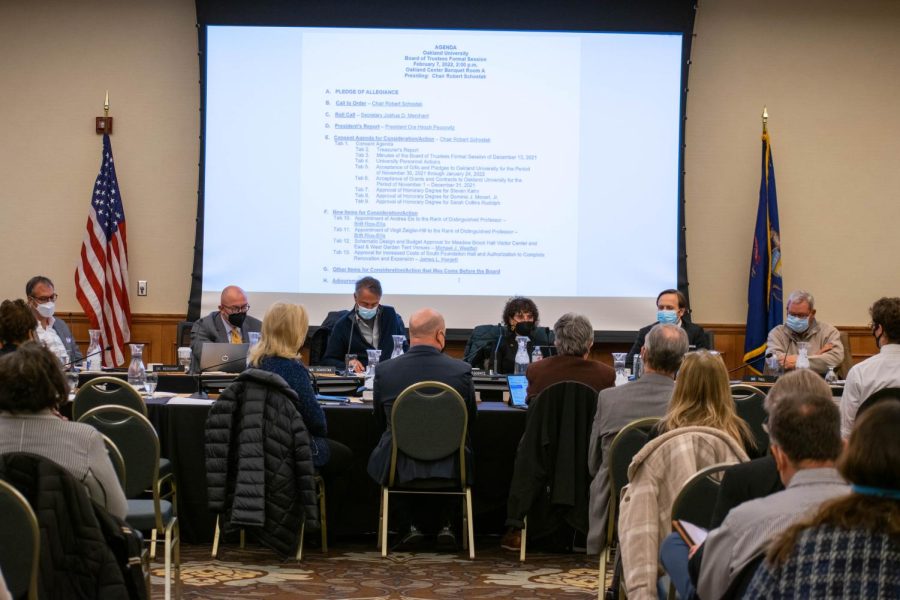 OU's Board of Trustees alongside President Pescovitz and Chief of Staff Josh Merchant at last Monday's BOT meeting. The BOT's announcement of the creation of the Faculty Board Liaison Task Force could facilitate better communication between OU AAUP faculty and the upper administration.

In a letter sent to the University Senate this morning, Chair of OU’s Board of Trustees (BOT) Robert Schostak announced the creation of the Faculty Board Liaison Task Force (FBLTF) as a way to “facilitate communication between OU faculty and the [BOT].” The entire letter is presented in italic below.

I am pleased to announce the establishment of the Faculty Board Liaison Task Force (FBLTF), which will facilitate communication between the OU faculty and the OU Board of Trustees. This task force will open lines of communication and foster discussion to advance the collective goals of the faculty and Board in support of Oakland University.

Two representatives from the Oakland University Board of Trustees

The President and the Provost (or their respective designees)

Additional ad hoc faculty leaders as requested by the Board

Initial appointees to the FBLTF include:

The first meeting of the FBLTF will be scheduled soon and take place this semester. Meetings will also be scheduled for the summer and fall. As needed, special meetings of the task force will be called at the Board’s request.

My Board colleagues and I look forward to working with fellow task force members to ensure that we maintain meaningful and productive dialog addressing important faculty, Board and administrative concerns.

Chair, Oakland University Board of Trustees”

Newly announced and apparently created this week, the perceptions and understanding of how the FBLTF will function are all very preliminary. For instance, it is unclear at this point why the FBLTF concept was acceptable to the BOT and the OU AAUP’s requests for faculty liaisons were not.

Still, Oakland University’s Chapter of the American Association of University Professors (OU AAUP) President Karen Miller sees the FBLTF as a potential step in the right direction for improving relations between the two sides.

“It’s supposed to start the semester, which is a good thing,” Miller said. “But I don’t know what the ground rules are, I just know who’s participating … I have to assume that we’re all going to try to work together and figure something out … I think [the idea] has potential. It’s going to take us a long time to heal, but it has the potential of helping us to heal, so I will cooperate to the best of my ability to try and make this successful.”

The announcement of this task force comes on the heels of renewed tensions between faculty and the upper administration over allegations of bad-faith bargaining, as well as an OU AAUP survey which revealed hundreds of OU AAUP faculty were in favor of faculty liaisons. The Post will continue following this story.