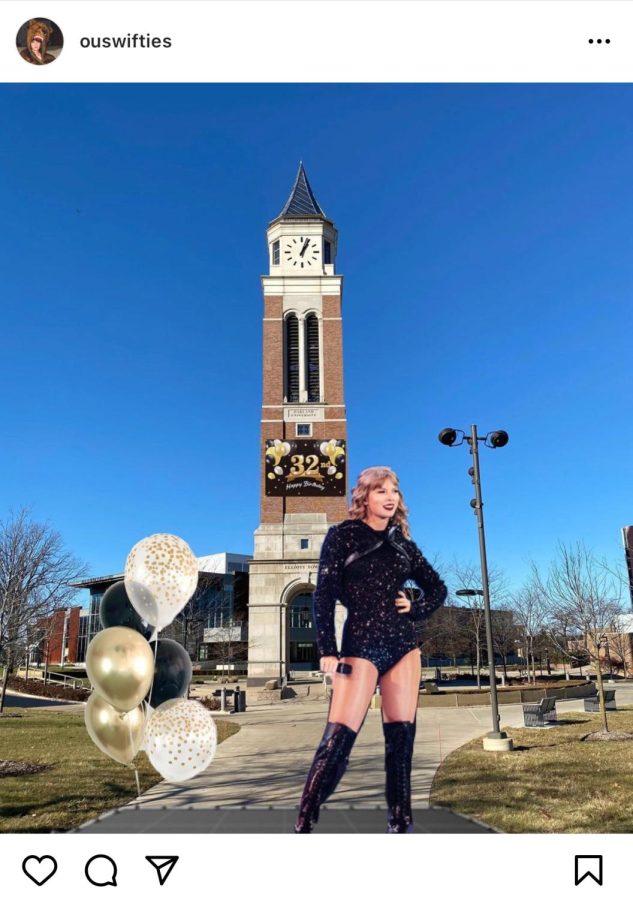 Taylor Swift strikes a pose outside of Elliott Tower.

Social media nowadays is huge — everyone is on it. At this point, there are so many accounts, other than just personal accounts. At Oakland University, there are a couple parody accounts that have began to run the campus community’s social media presence.

Let’s start with a fan favorite. @OUswifties on Instagram has caught the attention of all the Taylor Swift fans at OU, and has them in a chokehold. Their content is consistent — mostly photoshopping Swift in multiple places at OU as if she is a normal student here.

The Swifties are just loving this account, and many are posting the photos to their story because (obviously) Taylor Swift is at OU by the Elliott Tower and sleeping in her classes. This account keeps me going and makes me smile everytime they post. I really believe Swift would love it at OU.

I give this account a 5 out of 5 stars. I myself am a huge Swiftie and love the creativity of these posts.

Now that the celebrity accounts have made their way to Instagram you just know someone had to start a Harry Styles version, @OUharries. Now — this account is not nearly as good as the Taylor Swift one, but I get the point.

With the absolute love people have for Styles, I see where it’s coming from. Most people would hate me for saying this… but I am just not a Styles fan. I see how people can like this account taking somewhat the same approach as @OUswifties, but for some reason, it’s really lacking with less relevant posts.

I would rate this account a 3 out of 5 since it was a copycat idea, and just doesn’t have the same quality as the Swift version it is directly compared to.

Another parody account on instagram is @ou_affirmations, which uses a fun style of photoshop to present students with these encouraging messages to help everyone get through the semester.

My personal favorite is President Ora Hirsch Pescovitz telling me to spend my “Ora bucks” wisely — on Subway that is. The captions on this account are on point, along with the use of emojis.

I rate this instagram a 4 out 5 — only because I wish they posted more! It is such a fun and interactive way to get students motivated and have a little joke about it as well.

Now, onto the absolute classic of OU parody accounts, the legendary twitter account of @cursedvandy which highlights the disgusting and questionable food being served at the Vandenberg (Vandy) Dining Hall.

This twitter was made during my Freshman year of college in 2019 and it was a true hit back then, showing the potato chip cookies, macaroni and cheese soup or hot dog frito pie.

There are some weird pictures shown on this account, and even weird online descriptions of the food on the dining hall website. Whoever decides on the Vandy dining hall menu should be fired.

Since this is such an original account in my eyes, and dates back years — unlike the accounts mentioned above that have been created more recently — I rate this account a 5 out of 5. They warn us about the food.

These fun social media accounts make OU a better place and they all hold a special spot in my heart, so thank you anonymous account runners for doing your part in making the OU community just that much better.