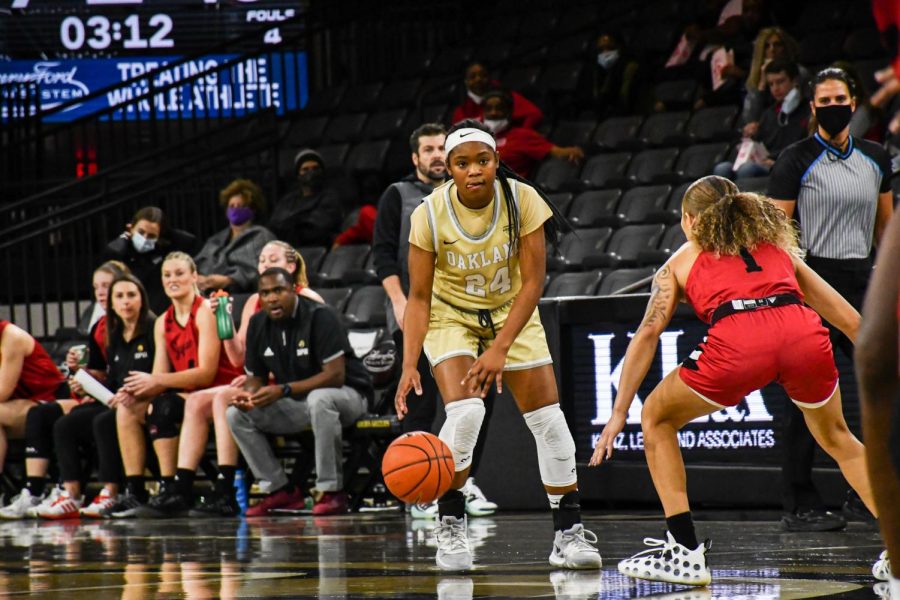 Brianna Breedy dribbles the ball up the court against IUPUI on Dec. 4, 2021.

In a game where the stats do not show the full story, the Oakland Golden Grizzlies women’s basketball team suffered a devastating loss to the IUPUI Jaguars last Friday despite putting in an arguably better showing than the victors.

The Golden Grizzlies, fresh off of their win over the Youngstown State Penguins [who are the second seed in the Horizon League], came into this game with a solid amount of momentum and confidence.

The first quarter started off hot and end in a hailstorm of buckets from both teams, with threes and layups coming through the basket with seeming ease. The end of the quarter would see the players sit with a Jaguars’ lead, the scoreboard reading 19-18.

Neither team cooled down in the second quarter, with a similar barrage of scoring coming in from the players. The halftime buzzer sounded with the lead remaining unchanged, as the Jaguars lead 32-28.

The third quarter saw a change in pace for the game, as the Grizzlies’ offensive production would drop off while the Jaguars continued their scoring ways. The Jaguars separated themselves and their lead here, extending their former four point lead into a 13 point lead by the end of the quarter, with a score of 48-35.

The Grizzlies started off the final quarter trying to cut into the lead, eventually getting the deficit down to 5 points. Despite this, the Jaguars’ hold on the lead tightened and they would ride their production all the way out to the final buzzer, winning the game with a score of 64-56.

The reason why this loss is so tough to swallow is because the Grizzlies played well for most of the game. The Grizzlies were doomed by a third quarter slump in which they dug a hole so deep that their fourth quarter heroics could not help them recover from it, as opposed to the Jaguars who [albeit inefficiently] stayed relatively consistent with their production throughout all four quarters.

The Jaguars, for comparison sake, shot below 40% from the field [more specifically, they shot 38%] with a 21 of 55 showing and 31% from the three point line with a 5 of 16 shooting rate. They would have relatively similar shooting performances, but the Grizzlies were better, which again contributes to the head-scratching nature of the loss.

Only four players [Macee Williams, Rachel Kent, Breanne Beatty and Kahlaijah Dean] from both teams combined notched double digit scoring numbers, which is just another example of how hard it was to remove the lid from the basket for both teams.

The Golden Grizzlies will return to the court on Feb. 10 to face off against the Green Bay Phoenix at 7 p.m. at the O’rena.