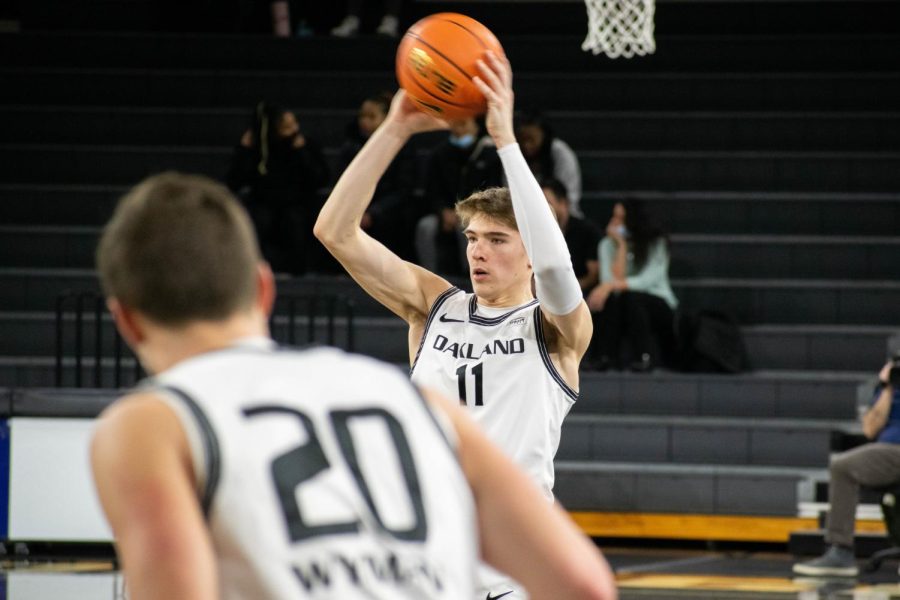 The Oakland men’s basketball team tallied its seventh loss of the season on Saturday night, as it struggled to execute down the stretch in a 75-64 defeat.

Playing its second game in as many nights, the Grizzlies failed to rebound after a second half collapse led to a loss against Northern Kentucky on Friday night.

Despite a poor shooting performance in the opening minutes, the Golden Grizzlies were able to stave off the Raiders throughout the majority of the first half.

Led by a valiant 15-point first half effort from Trey Calvin of the Raiders, Wright State found itself down just one point at halftime.

Jamal Cain, Oakland’s leading scorer, was essentially a non-factor in the opening half. The senior standout recorded two fouls in the first four minutes, and went scoreless in the first half.

Blake Lampman caught fire for the Grizzlies. The sophomore guard connected on 4-6 3-point shots in the first half, and he led the team in points with 14.

Micah Parrish had an efficient first half, notching seven points on 3-5 shooting in 19 minutes. Moore, Trey Townsend, Brody Parker and Chris Conway were also in the scoring department for the Grizzlies.

Oakland squandered its lead to start the second half, but quickly turned things around to take a 45-41 lead at the under-16-minute media timeout.

Jamal Cain came to life in the second half, giving the Grizzlies a much-needed boost. His seven points gave Oakland a 51-43 lead with 13:36 remaining, but Wright State trimmed the lead to five at the under-12-minute media timeout.

The teams continued to battle down the stretch, but neither team was able to pull away. With just 7:56 to play in the game, Oakland clung on to a slight 59-57 lead.

The Raiders never looked back, and finished off the Grizzlies in easy fashion down the stretch.

Trey Calvin and Tanner Holden led the way in scoring for Wright State, with 23 and 19 points respectively. Grant Basile added 16 points of his own to help the Raiders to the victory.

On the other end of the floor, Oakland struggled to garner any momentum. Lampman was the team’s leading scorer with 16. Cain finished with 13 and Townsend added 11 in the losing effort.

The Grizzlies have now dropped two straight games, and will look ahead to Youngstown State and Robert Morris next week. The Grizzlies will take on the Penguins at Beeghly Center on Wednesday, Feb. 9, and the Colonials at the UPMC Events Center on Friday, Feb. 11.