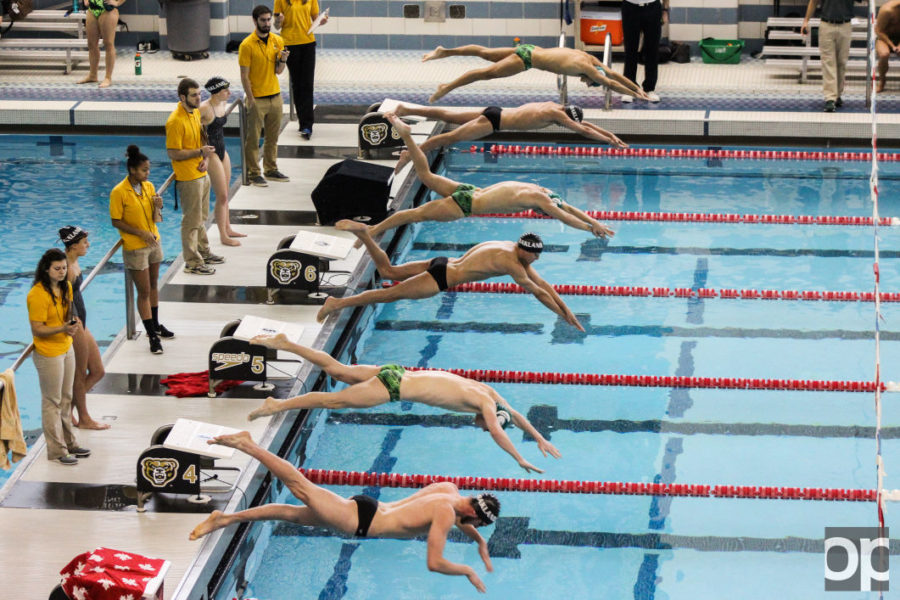 With both the men and women’s teams active for the event, Oakland had a chance to face off against a Horizon League rival at the end of their regular season. Looking to defend their Horizon League championship for potentially eighth straight season, the Golden Grizzlies were focused headed into the pivotal match.

The Golden Grizzlies women were absolutely sensational against the Vikings, coming out of the day on top of all medal counts in double digits, with 14 gold medals to two, 10 silver medals to six, and ten bronze medals to six. Eight different swimmers ended the day with gold medals for Oakland, including four with multiple.

Swimmers Susan LaGrand and Taylor Bailey, both seniors, led the way for the Golden Grizzlies, each earning two gold medals and a silver medal respectively. The combination of a variety of finishes from the dominant team led Oakland to not only win in medal count, but to dominate the scores 217 to 78.

The Golden Grizzlies men faced a feisty opponent in their waters, barely winning out in totals and medal counts, winning in gold medals 9-8, losing silver medals 9-8, and winning bronze medals by the same score. The Gold medal count shows how tough this matchup was for Oakland, as 11 different swimmers won gold between the two teams, including Cleveland State having six swimmers win gold compared to Oakland’s five.

In spite of the fewer swimmers with golds, Oakland’s Adam Flowers, Marko Khotynetskyi, and Christian Bart were the only swimmers to win multiple gold medals. The Golden Grizzlies faced a tall task against a deep Vikings team, but were able to pull ahead in medal counts and inch out a win in scores, 159-142.

With the regular season wrapping up, the Golden Grizzlies have one major event left before the Horizon League championship. Oakland will host the USA Michigan Open from Feb. 11-13 at the Oakland Aquatic Center. Oakland’s final stop will be this at home invitational as they prepare for the Horizon League title.

If there’s anything to take from their win over the Cleveland State Vikings is that the Horizon League title was never guaranteed. The Horizon League is as deep as they have ever been, with teams who have a realistic chance to upset the Golden Grizzlies, and that it’s going to take everything Oakland is made of to get their eighth straight title. As hard as the other teams are willing to fight, Oakland needs to be able to match.

Just as the competition is tough this year, Oakland knows something about the championship: they’re just as tough. You don’t win seven straight for nothing.