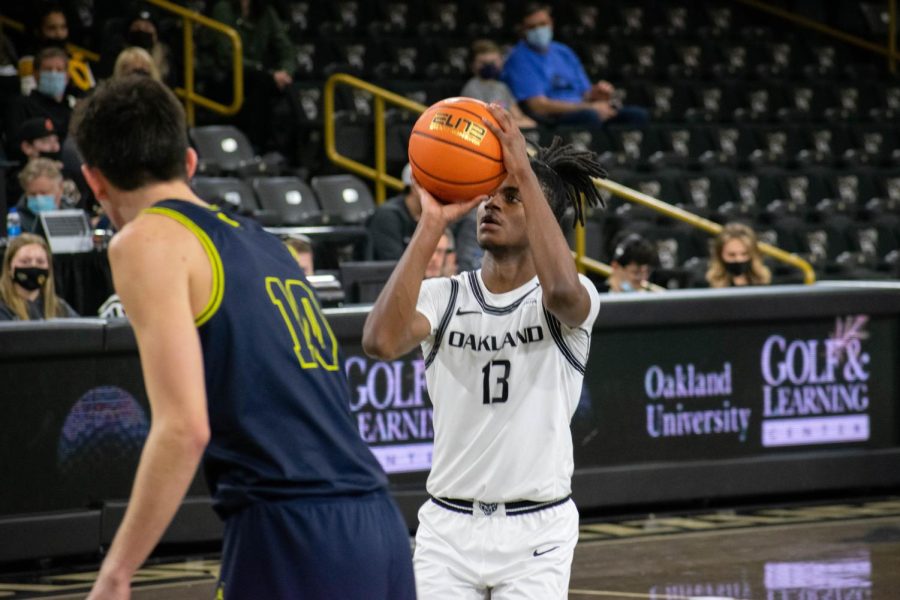 Osei Price shoots a free throw against U of M Dearborn on Jan. 24.

The Oakland University Golden Grizzlies men’s basketball beat the University of Michigan Dearborn Wolverines 104-61 on Monday, Jan. 24 at the O’Rena .

The Golden Grizzlies looked to fine-tune their offense against the Wolverines in between a pair of Horizon League matchups. Though Oakland was highly favored versus U of M Dearborn, the importance of the game wasn’t lost in coach Greg Kampe, who saw the opportunity to let the younger players on the team develop.

“… To be honest with you, I’m thinking about maybe in the future, saving a game in the schedule like this to put in at this time of the year, because I can’t tell you how good this is for our team and our guys,” Coach Kampe said on the victory. “To have Jalen [Moore] and Jamal [Cain] on the bench cheering and, you know, just role reversals.”

In the first half, the Golden Grizzlies jumped to an early lead, but the Wolverines converted a few quick buckets to make it a 17-14 affair, Oakland locked in defensively and attacked the interior to quickly turn the tide and ended the first half 50-26. Oakland’s ability to force turnovers and score in transition was a key factor in the game, as they outscored U of M Dearborn 19-3 in points off turnovers in the first half, as well as 9-0 on the fast break.

In the second half, Oakland continued their interior scoring onslaught as they continued to score on the interior and get to the free throw line, where the team was hyper efficient, converting 25 of 27 free throws for the game. U of M Dearborn played good basketball throughout the game, out rebounding the Golden Grizzlies 39-37, and three Wolverines were in double digits scoring. Though a well-coached and balanced team, they couldn’t keep up with Oakland’s speed and efficiency.

As great as Oakland played, including six Golden Grizzlies in double figures, the performance of the night goes to freshman guard Osei Price, who had a historic game. Price led Oakland in scoring, putting up 27 points in a perfect night of shooting, hitting all seven of his field goals, all five three-pointers he took, and not missing any of his eight free throws. Price’s perfect performance hasn’t been replicated in the last 20 years. For the young Golden Grizzly, this game is a glimpse into the program’s future.

The Golden Grizzlies don’t play again at the O’Rena until Feb. 13 vs. the Detroit-Mercy Titans. Oakland looks to build upon this game to challenge for its first Horizon League title since 2017.