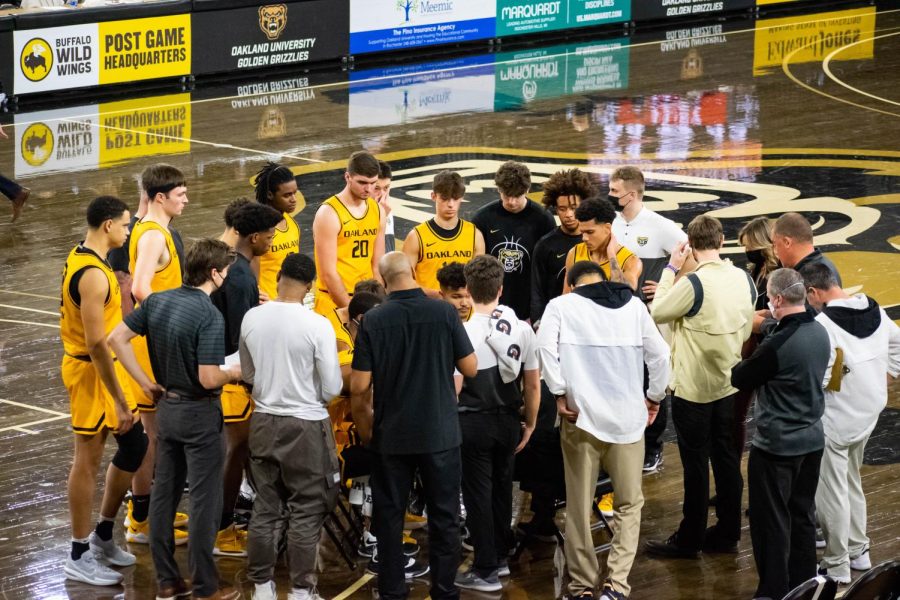 The Oakland men's basketball team in a huddle during a timeout against Milwaukee on Jan. 9.

The Oakland University Golden Grizzlies men’s basketball team is currently tied for first in the Horizon League record-wise. At 14-5, including 8-1 in conference play, this Oakland team has proven to be a juggernaut in the conference. Among the top in points per game, points allowed, steals and point differential, the Golden Grizzlies have the look and making of a champion.

The Golden Grizzlies team leads the Horizon League in scoring with 75.2 ppg. A combination of Oakland’s size, speed and athleticism gets to the line and stays aggressive in the paint. Oakland, season long, has led the Horizon League in free throws and consistently takes care of the basketball as they average the fewest turnovers in the conference. With all of these pluses, their path to the first Horizon League championship since 2017 is far from automatic.

Though Oakland has the physical makeup, their losses are often a product of two flaws: the three-point shot and rebounding. Oakland is 10th in the conference in terms of three-point shooting percentages, though they’re fourth in attempts. Oakland, shown most recently in their loss to Milwaukee, was outrebounded by eight. In wins and losses, these two things have plagued what is a highly talented Oakland team with higher aspirations.

So, with these factors in mind, how will Oakland win the Horizon League for the first time in five years? Easy. Play to your strengths and focus on the transition and interior.

Oakland is fast and they have the size to play the passing lanes, as they’re second in the conference in steals. Though rebounding must be improved moving forward, they have the personnel that can force turnovers, allowing for fast break points. It’s one thing to try to guard Oakland in the half court, it’s another to compete with an athletic team in what’s essentially a foot race. In a half court setting, Oakland is aggressive and gets to the paint. As they force their way inside, they draw fouls and get to the free-throw line, where they lead the Horizon League in free throw percentage.

Does Oakland need to improve shooting and rebounding? Of course they do. Consistent open shooting allows the driving lanes to open and more one on one matchups that they can exploit. Controlling boards leads to more possessions and more scoring opportunities. That said, Oakland should not force its identity to modernize or take shots that the players aren’t used to. Consistent shooting will always be necessary to win, but trying to play out of rhythm will cause more problems than it would fix.

Oakland’s team is at it’s best when they’re forcing turnovers, running in transition and scoring inside. Oakland’s mentality is to push the ball inside and keep the pace quick. As much as Oakland has to improve shooting, they make up for their shortcomings with one of the most relentless attack offenses in the conference.

Oakland looks to lock in it’s standing to close out the season, and all but one of its opponents are Horizon League rivals. The Golden Grizzlies are ready to represent their namesake.