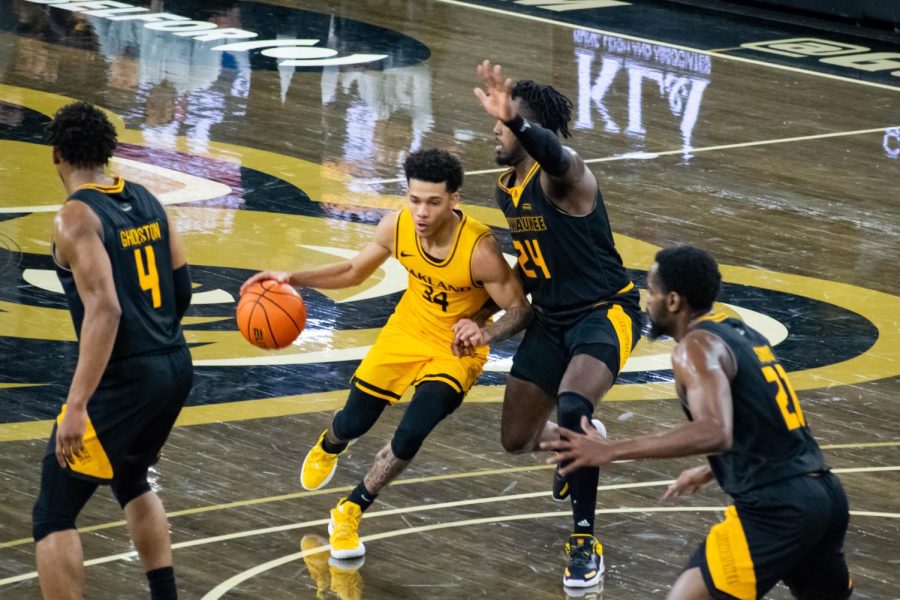 The Oakland men's basketball team suffered their first conference loss of the season on Thursday.

The Golden Grizzlies’ dominant six-game winning streak came to an end on Thursday, as the Milwaukee Panthers handed them a hard-to-swallow loss, 88-78.

The Golden Grizzlies started the game off in a slump, trailing by six points after the first few minutes had elapsed. They picked things up and gained a fleeting lead before the Panthers stormed back, making this first half a back and forth competitive affair.

Both teams continued to trade buckets until the Panthers started to pull away and establish a major lead, eventually holding on to a sizable 14-point lead by the end of the first half. Oakland came out of the second half and immediately started mounting their comeback with a shot from three.

The Grizzlies got incredibly close to tying the game up, but the Panthers started to string together offensive buckets and pull away yet again. The Golden Grizzlies were not be able to catch up until the very end of the game, with the highest lead during the barrage of offense climbing up to 16 points.

The game ended with a score of 88-78, as the Grizzlies tried to rally offense together and push the lead far too late. The Panthers simply outperformed the Grizzlies in nearly every aspect of the game during the win. The only stats they lost to the Grizzlies were turnovers and fouls, but the overwhelming difference in every other stat would lead to the win.

The Golden Grizzlies were also be outrebounded, collecting only 35 boards against the Panthers 43 rebounds. They lost the battle of assists, as well, only collecting 13 assists all game versus the Panthers 20 assists. The two statistical positives for the Grizzlies, however, were that they only turned the ball over 10 times and forced 17 turnovers from the Panthers. The Grizzlies also had 15 fouls in comparison to the 21 fouls committed by the Panthers.

Head Coach Greg Kampe took most of the blame.

“Yeah, it’s all my fault,” Kampe said. “The game plan was really bad. I outsmarted myself, I outsmarted everyone, and our players suffered because of that. So, I feel really bad that I thought I was so smart that I could change our game plan, and what we did didn’t work. It made us lethargic, we stood around, and we were just so bad offensively during the first half…but I’m so proud of the way they battled back, so proud of how we came out in the second half.”

The Golden Grizzlies will take on the IUPUI Jaguars on Thursday, Jan. 27 at 7 p.m. at the O’rena.