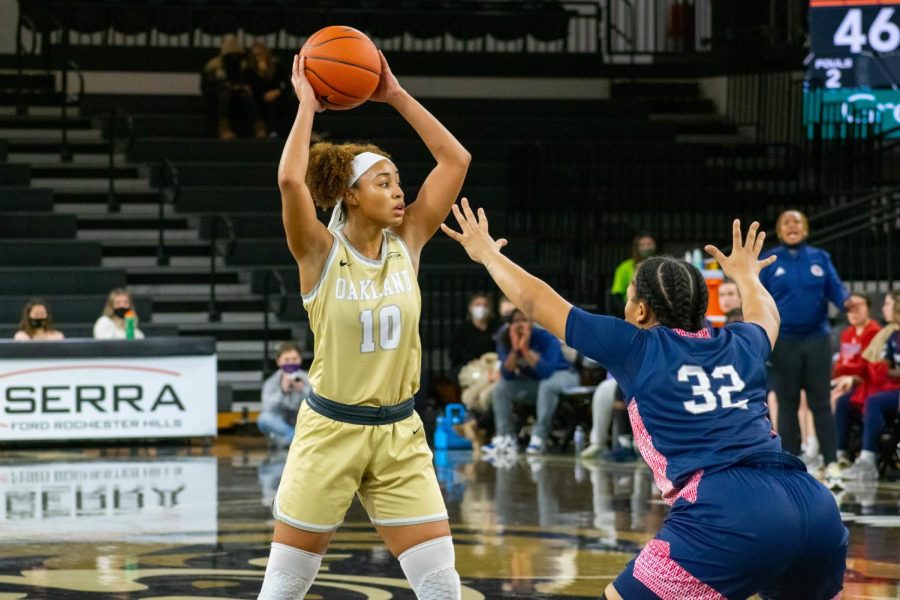 Breanne Beatty looks to pass the ball against Detroit Mercy on Jan. 20.

After trailing the Detroit Mercy Titans going into the fourth quarter of a very close game, the Golden Grizzlies won a hard fought basketball game 66-62 to get above .500 on the season on Saturday.

Despite this, the game was close all the way until the very last buzzer, evidenced by the multiple scoreboard ties in this game. The first quarter ended on a last second three-pointer from the Golden Grizzlies’ Sydney Gouard to send the game into the second quarter tied 16-16.

The game remained just as close in the second quarter, as both teams continued to trade shot after shot and bucket after bucket. The Grizzlies left this quarter with a slight lead, at a score of 32-30 before halftime.

The next quarter gave much of the same battle, as both teams came out of the locker room swinging at full strength. The Titans slightly edged out the Grizzlies by the end of the quarter, leading 51-50 going into the fourth.

In the fourth and final quarter, the Titans began to pull away with a slight lead to start. This lead would quickly be erased by a flurry of points from the Grizzlies, who refused to let such a hard-fought game slip away. The Grizzlies would eventually tie the game at 57, then take the lead on the back of a Breanne Beatty three-point shot.

The Grizzlies shot 44% from the three-point line, beating out the Titans percentage by 4%. The Titans were outrebounded [especially on the offensive glass where they collected eight offensive boards versus 17 for the Golden Grizzlies], out-assisted, committed more turnovers and committed more fouls than the Grizzlies in an all-out abysmal performance.

With this win, the Golden Grizzlies improve to 9-8 [7-3 in conference play] on the season, and have now won four of their last five games and will complete the season series sweep against the Titans with a record of 2-0. On the other side of the spectrum, the Titans’ record continues to spiral downward as they lose their 18th straight game this season, making their current record 0-16 [0-11 in conference play] as they rest at the bottom of the Horizon League standings.

Following this win, the Golden Grizzlies are now sitting three  games back behind the first seeded Youngstown State Penguins [16-2 on the season] in the Horizon League. The Golden Grizzlies will prepare for their second matchup of the season against the Robert Morris Colonials on Jan. 28 at 7 p.m. in Moon Township, Pennsylvania.