Line 5, a threat below the surface 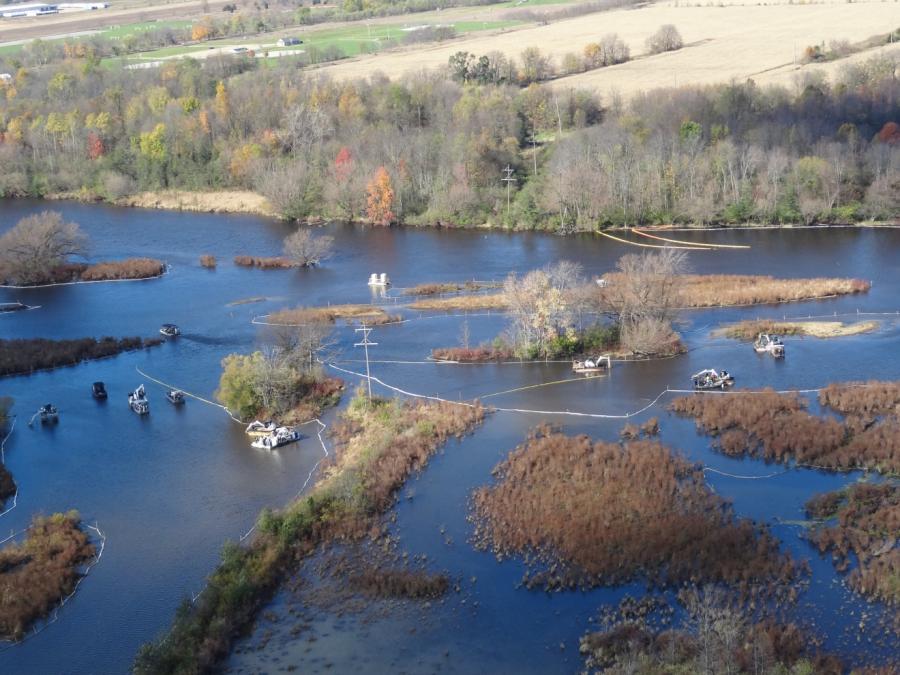 Photo courtesy of Michigan Department of Health and Human Services

Enbridge reported a break of their oil pipeline near the city of Marshall in Calhoun County, Michigan on July 26, 2010.

Any Michigander knows the greatest asset to the state is the Great Lakes. The Great Lakes generate more than 1.3 million jobs and $82 billion in annual wages. The draw to the Great Lakes also accounts for Michigan’s $17.7 billion tourism industry. To summarize, Michigan’s fresh water is directly linked to continued economic prosperity for the state.

However, there is a threat lurking 100 feet below the surface of the straits of Mackinac that could endanger Michigan’s most valuable resource.

This threat is from Canadian company Enbridge Energy and their dual pipeline. This pipeline, known as Line 5, became operational in 1953 and carries up to 22.7 million gallons of crude oil, synthetic crude and natural gas liquids per day.

Unfortunately for Michigan, Enbridge has a history of irresponsibility. On July 26, 2010 Enbridge reported a break in an oil pipeline in Calhoun County. The break resulted in more than one million gallons of oil to spill into Talmadge Creek and the Kalamazoo River — the worst inland oil spill in U.S. history.

More recently, Enbridge failed to report to Michigan officials that a boat anchor had caused damage to one of the pipes which was severe enough to cause a temporary shutdown of Line 5.

It is evident Enbridge Energy cannot be trusted to sufficiently oversee pipeline operation in the straits of Mackinac or anywhere else within the state. If Enbridge’s carelessness caused a Line 5 rupture, it would result in an unmitigated health, economic and environmental crisis unlike Michigan has ever seen.

A breach in this line would devastate 700 miles of Great Lake shoreline and take years to clean. In the past 50 years, Line 5 has already spilled 1.1 million gallons of oil due to leaks in the pipeline. Michigan does not deserve one more drop of oil in its lakes due to Enbridge’s incompetence.

There is also a huge risk to the health of residents if this pipeline is not shut down. The straits of Mackinac connect Lake Huron to Lake Michigan. A spill from Line 5 would compromise the drinking water for more than 35 million people who depend on the lakes for their water supply.

Additionally, a spill would cause an ecological disaster for the plant and animal species in the region. A study from Michigan Technological University researchers found that “a spill would release 32,000 to 58,000 barrels of crude oil into the Great Lakes and put 47 wildlife species and 60,000 acres of habitat at risk.”

Despite the clear dangers of keeping Line 5 in operation, some have argued that a shutdown would cause a hike in gas prices.

According to News Review,  “The report commissioned by the National Wildlife Federation and C.S. Mott Foundation, found that rail transportation could effectively replace the energy supplied by Line 5 while increasing the price only by about 5 cents per gallon.”

Isn’t preservation of Michigan’s greatest asset worth a nickel?

In November 2020, Michigan Governor Gretchen Whitmer ordered that Line 5 be shut down. Since then, the state has been met with ensuing battles from Enbridge and the Canadian government. The dispute even reached the White House with the Biden administration announcing its unwise decision to not support the closure of Line 5.

The White House did announce the “U.S. Army Corps of Engineers is conducting an environmental assessment on Enbridge’s plans to encase the underwater portion of the twin pipeline in a deep, fortified underground tunnel.”

Today, the battle to shut down Line 5 is nowhere near a conclusion. As of Jan. 18, the Michigan government and Enbridge are in court arguing if the case should be heard by a federal judge or at the state court level.

Each day that passes with no outcome is another day that Michigan’s Great Lakes remain at risk. For those who have not been paying attention, you do not want to wake up one day and smell the oil. Shut down Line 5.