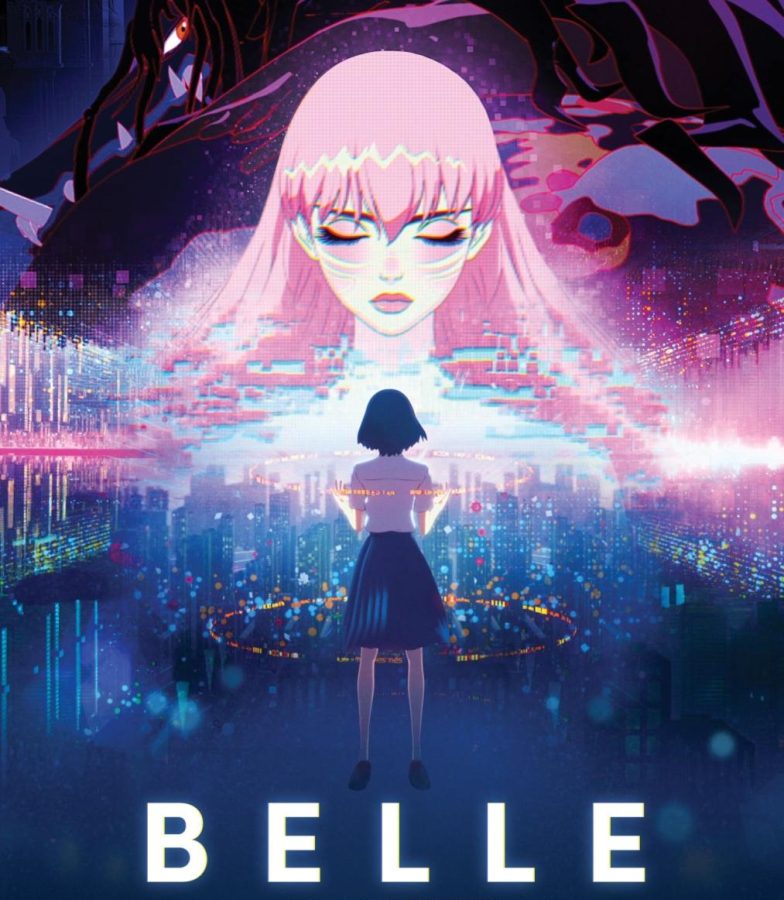 Studio Chizu released "Belle," a rendition of the classic fairy tale Beauty and the Beast on Jan. 14. The movie is out in theaters now in both English and Japanese.

Studio Chizu creates another rendition of the classic fairy tale Beauty and the Beast, but does so through the world of high school and virtual reality.

“Belle” is in theaters in both English and Japanese — with subtitles — but this review will talk about the Japanese version as I feel it was a more enjoyable experience.

“Belle” begins by introducing you to the world of “U”, an enormous virtual world where people can escape through a unique online persona. Here we meet Bell, a celebrity in “U” who is known for her gorgeous appearance and beautiful singing voice.

Bell is controlled by Suzu — both voiced by Kaho Nakamura — an everyday high school student who tends to blend into the crowd and doesn’t like to stand out. Suzu has a love for singing, but since her mom died, she lost the joy she once had for it.

One touch I did like is since her mom was in a small choir group, Suzu remained attached to the group despite not sharing her singing with the public world. She never lost that connection to music and singing, but in her eyes she lost the ability.

Once Bell — called Belle by the citizens of “U” due to it translating to “beautiful” in French — garnered billions of followers, she started performing concerts to the public. During one concert, a dragon that goes by quite literally “The Dragon” (Takeru Satoh) comes in being chased by a group of vigilantes controlled by Justian (Toshiyuki Morikawa).

Bell and The Dragon begin to form a friendship/relationship — insert Beauty and the Beast angle — while in the real world Suzu begins to struggle with her personal relationship with childhood friend and crush Shinobu (Ryô Narita). Suzu’s friends Ruka (Tina Tamashiro) and Kamishin (Shôta Sometani) share their feelings for each other at the same time.

The scene where they confess their feelings is probably one of the best scenes of the movie — such a simple, yet weirdly long scene filled with embarrassment on both sides and hilarious facial and body expressions.

Suzu reveals her true identity in “U” so that Kei/Ryū — the human in control of The Dragon — can trust her to save them. Kei and his brother Tomo (Hana) are currently living with their abusive father and seek help.

This part of the movie caught me incredibly off guard, it seemed weirdly out of place and was a very dark turn. The director — Mamoru Hosoda — does provide a new dynamic to the original tale by not having Suzu be a victim or get kidnapped, and delves into the side of cyberbullying and how those affected can lash out.

The movie ends with Suzu confronting the father and seemingly saving them, I guess. She returns home and rekindles her relationship with her father and is now ready to share her singing with the real world.

I truly did enjoy this movie, even with some of it feeling like it was just missing parts. There’s a scene where Suzu is running while putting in the device that connects her to “U” but the app literally redirects your eyesight so she can live in “U”.

Besides that, I found the movie to be very entertaining and fun to watch. It featured a great soundtrack and stunning visuals — my favorites were the multiple dresses Bell wears throughout the film.

The roughly two-hour film definitely had some interesting choices, but all in all I would still recommend it to anyone who wants an enjoyable movie experience.