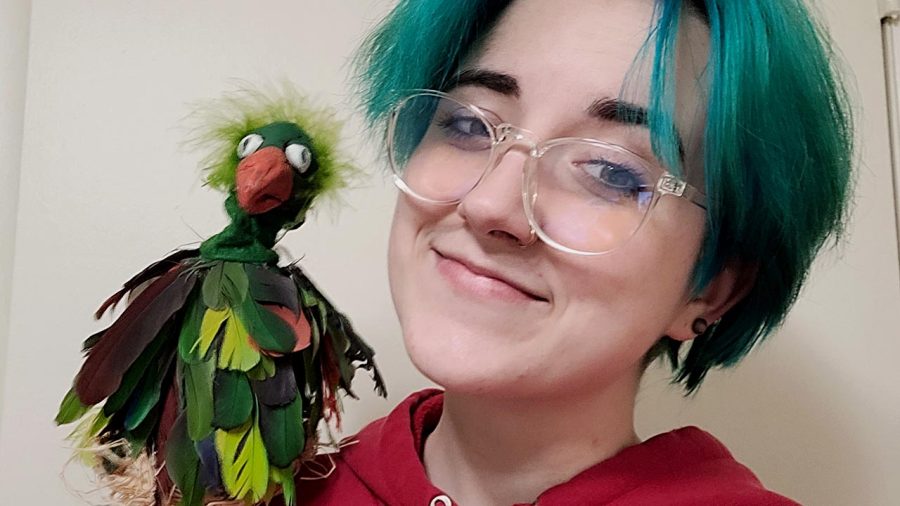 Liv Kunkle won the S.P.A.M. Props Award for her design of the parrot for “How I Became a Pirate.”

Students from the Department of Theatre represented Oakland University with their work at the Region III Kennedy Center American College Theatre Festival (KCACTF).

Plays are a big part of the festival, and two students — Sarita Alvarado and Antonio Vettraino — were chosen to direct plays in the 10-minute play competition. OU also had five students who were cast in the plays: Cassius Merriweather, Haley Lucas, Mason Gaida, Noah Canales and Princess Jones.

Alvarado was awarded with the KCACTF National Playwriting Program 10-minute Play Director’s Award for “The Plot Beneath My Feet.” The play — written by a senior at University of Michigan — is about gentrification within a primarily BIPOC neighborhood.

“I haven’t seen gentrification take over neighborhoods that I care deeply for firsthand — I know my father and grandparents have,” Alvarado said. “I have always wanted to make a difference within the world of theatre. I think that winning this award has shown me that my vision is important and that I did it in a way that was understood.”

Three of them moved on to the semi-final round with their partners: Kiesler with partner Wilson-Nelem, Hoffmeyer with Travis Darghali and Vernengo with Sarles. Kiesler ended up being a finalist for the competition.

OU had a representative for the Musical Theatre Intensive (MTI) competition, Cayla Stus, who was selected as one of the 15 finalists. This was Stus’ second year attending KCACTF but the first year being selected as a finalist for MTI.

“It felt like a testament to the work I’ve been doing since I got to Oakland, and it was such a great feeling to know that my work was being recognized by professionals outside of OU,” Stus said. “By the time I was seven, I knew that I wanted to sing for the rest of my life. I couldn’t imagine my life without performing, and I’m so grateful to be studying musical theatre.”

“While I am very proud of Petey the Parrot, I am actually most proud of my unrealized design of ‘The Wiz’ as I was really able to express my artistic vision without any outside input,” Kunkle said. “COVID struck and I had lost my love of art in general so I didn’t compete last year. I decided that this year I would make up for lost time and not only compete but present everything I had designed.”

Along with competitions, OU also had students featured in the student council for Region III. Leah Wilson — student council president — organized 13 open and student-only events for the festival this year. Wilson was elected vice chair last year and moved to chair of the student board this year.

“Representing OU is a huge honor because I feel like our program could always use the representation, but also I get a chance to talk with my peers to get input in what they’d like to see,” Wilson said. “I loved being able to provide a creative and nonjudgmental space for students to express themselves. It’s something that is very special to me.”