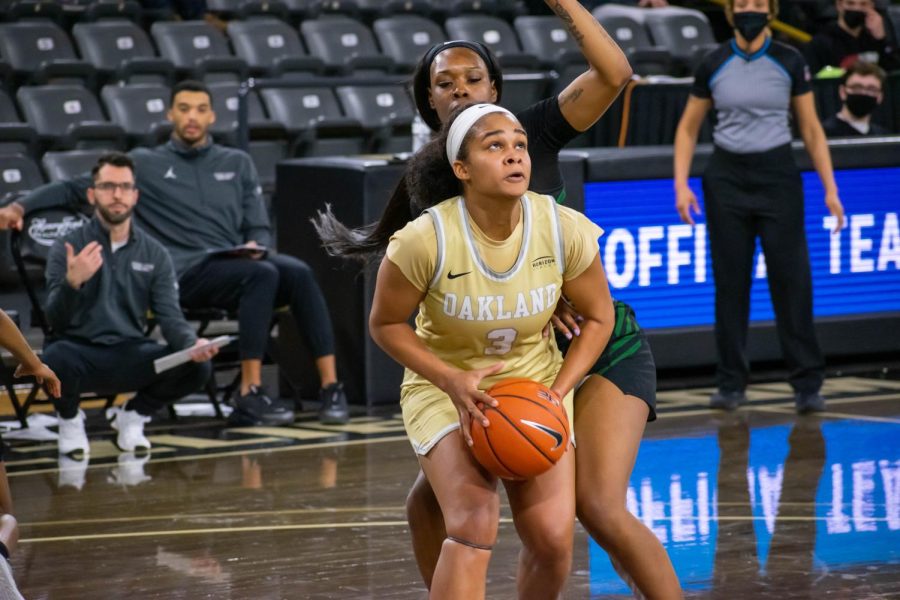 Sydney Gouard goes for a shot against Wright State on Jan. 13.

The Oakland Golden Grizzlies women’s basketball team defeated the Wright State Raiders on Thursday night by a score of 62-51. With the win, the Grizzlies improved to 7-7 overall and 5-2 in Horizon League play.

Oakland opened the game on a shooting tear, making four of its first six shots in the opening two minutes. After leading 9-2 early in the game, an ensuing Oakland shooting slump gave the lead to the Raiders, and Wright State led 12-11 after the opening quarter.

In the first quarter, the Golden Grizzlies were led in scoring by Breanne Beatty [5], Kayla Luchenbach [4] and C’Erra Maholmes [2].

Oakland got back on track in the second quarter, finishing the first half with a 30-24 lead. The Grizzlies had strong contributions from Beatty [10 points] and Aaliyah McQueen [6 points]. The Raiders on the other hand, had a miserable half shooting the basketball, with an abysmal 8-33 from the field and 0-10 from behind the arc.

Oakland came out swinging in the second half, once again with nine quick points. The Grizzlies continued to extend its lead behind more strong play from Beatty and McQueen. The Grizzlies held an 11-point lead going into the fourth quarter, leading the Raiders 47-36.

The Golden Grizzlies began to pull away in the fourth quarter, establishing a 16-point lead early in the quarter. The Raiders were unable to string together positive possessions, and were ultimately outmatched by a Grizzly team that had its best defensive performance of the season.

It was a career night for junior guard Breanne Beatty, as she notched a career high in points [16] as well as 3-pointers made [4].

“It just felt really smooth,” Beatty said. “My coaches have been harping on me to not worry about shooting and just play smooth and that’s what I did tonight.”

Beatty’s 16 points was good enough to lead the team in scoring on the night, making her the team’s fourth different leading scorer in its last four games, which Interim Head Coach Ke’Sha Blanton sees as an advantage.

The Grizzlies have now won three games in a row, and will look to pull away from the cluster of teams behind it in the Horizon League standings. After the game, Blanton gave her thoughts as to how the team can continue its winning ways heading into the back half of the season:

“They’re really enjoying it right now,” said Blanton. “They enjoy it. We’re having fun, and we just have to keep playing team basketball and everything will take care of itself.”

Oakland held sole possession of second place in the Horizon League standings before losing to Northern Kentucky on Saturday, trailing unblemished Youngstown State by two games. Although the Grizzlies stood alone in second place, there were four teams within just a half game of Oakland. The team will need to be clicking on all cylinders as it faces a tough stretch that will determine where the Grizzlies finish in the Horizon League.