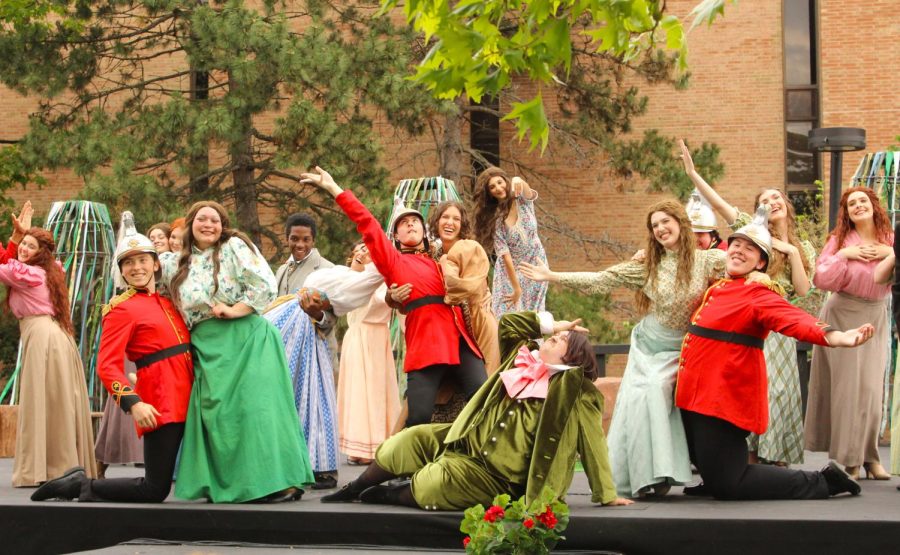 OU's SMTD performed "Patience, or Bunthorne’s Bride" on June 24, 2021 in the Varner Hall courtyard. Now, the SMTD is going on tour while the hall is renovated.

Due to important renovations to Varner Hall, the School of Music, Theatre and Dance (SMTD) — specifically the music and dance department — will be going “on tour” this semester.

The SMTD has partnered with multiple venues like the Flagstar Strand Theatre in Pontiac and Evola Music in West Bloomfield to provide SMTD students with an opportunity to continue performing in-person with live audiences.

“Hope is there will be an audience for in-person when they do happen,” said Kerro Knox 3, interim director of the SMTD. “We’ll record things if need be [but] recording no longer feels like theatre.”

If audiences are allowed ticket pricing should remain the same — however, due to having to use Ticketmaster for some venues, some tickets may see an increase from Ticketmaster’s built-in fees. Audience sizes may vary based on location or COVID-19 rates, but Knox said it is “valuable for students to perform no matter audience size.”

Dates, times and venues for the events can be found online or through brochures provided by the SMTD, but be on the lookout for any updates. COVID-19 has already forced the SMTD to cancel or postpone five shows in early February, with new dates expected to be added to March and April.

While not ideal, one potential advantage of the tour would be drawing in a whole new audience for OU.

“It helps us with … community engagement, especially engaging diverse populations,” Interim Director of the Theatre Department Jeremy Barnett said. “As an outreach tool, as a ‘getting the word out’ that we are doing really remarkably good work, it’s very useful.”

With OU classes shifting fully online through January due to COVID-19, the SMTD has resorted to remote teaching which Knox will tell you is “almost worthless.”

“Arts are about being in the same room — the band members and chorus members can only practice so much on their own,” Knox said.

Getting these shows in order is no easy task, however, as much of the equipment must be hauled by students and faculty to each different performance. This is, of course, due to recent renovations.

The renovations — which were approved back in December 2020 — are part of a $45 million improvement project the Board of Trustees commissioned. The renovations are less about improving the student benefit and more about making the building an actual safe space.

“The overwhelming majority of the renovation is really just bringing the building up to code,” Barnett said.

These renovations didn’t just spring out of nowhere. They have been in the works for years — at least 25 years for some faculty members.

“I’ve been here for 25 years and [there’s] been so many proposals,” Knox said. “I’m surprised this is actually happening.”

The renovations will be a 3-year process beginning with the fourth and fifth floors — now operating out of Fitzgerald and Anibal House — and they will be working their way down. Even though only one side of the building is currently being worked on, all departments are feeling the effects.

The theatre department will have to utilize buildings like Hill House for storage during construction, while the music department has to lug their instruments from Varner to Hillcrest. Faculty offices are also being moved around, with offices and storage split between four different buildings across campus.

The facelift of Varner Hall is important in terms of updating HVAC systems, but at the end of the day what the SMTD wants and needs are new spaces or even a new building. Barnett said there is “verbal support” but is “not optimistic” about getting anything new.