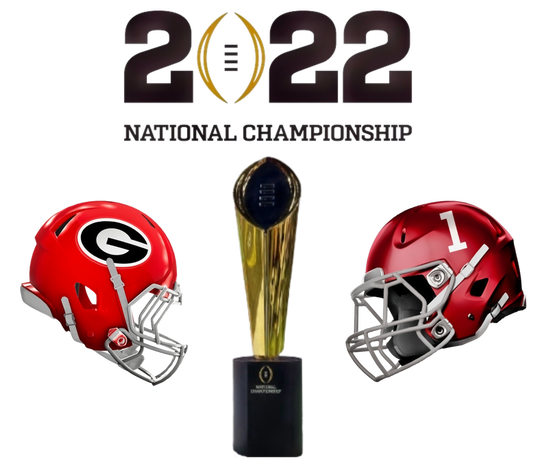 Alabama takes on Georgia in the College Football Playoff National Championship Game in a rematch of the SEC title game.

A memorable 2021 college football season will conclude on Monday night as SEC powers Georgia and Alabama battle it out for a spot in history.

The Alabama Crimson Tide enter the national championship game with an impressive 13-1 record, its only loss coming on Oct. 9 on the road against Texas A&M in what was a hostile night environment.

Alabama easily handled the undefeated Cincinnati Bearcats in the College Football Playoff Semifinal, by a score of 27-6. Tide running back Brian Robinson rushed for 204 yards on a Bearcat defense that was physically dominated throughout the game.

The Georgia Bulldogs also go into the championship game with a 13-1 record. The Bulldogs finished the regular season with an unblemished record, a perfect 12-0. Georgia, however, was beaten badly by Alabama in the SEC championship game, by a score of 41-27.

The two teams are now set for a rematch of the SEC championship game on Monday night. However, the recent history of this matchup has been extremely lopsided in the last 15 years, as Alabama is a perfect 7-0 against the Bulldogs since 2007.

Nick Saban, head coach of the Crimson Tide, is also 24-1 in matchups against his former assistants, which is a category that Georgia Head Coach Kirby Smart happens to fall under. Smart worked for Saban at Alabama, serving as the team’s defensive coordinator from 2008-2015.

Saban will look to win his seventh national championship with the Crimson Tide, which would cement his place as one of the best coaches in college football history.

The most intriguing matchup in this game will be when Alabama has the ball. Prior to giving up 41 points to the electric Alabama offense in the SEC championship game, the Georgia defense had given up just 6.9 points per game in the regular season. For the Bulldogs to win a national championship, it will have to do a much better job of slowing down the Alabama offense, which is led by the Heisman Trophy winning quarterback, Bryce Young.

When Georgia has the ball, it will need to use its weapons in creative ways to confuse the Alabama defense. The 24 points that Georgia scored in the SEC championship game is normally more than enough to get a victory. However, when playing against the Nick Saban-led Crimson Tide, 24 points is rarely enough. The Alabama offense is scoring 41.4 points per game this season, which is good for third in the nation.

Perhaps the biggest weapon that Georgia has on offense is true freshman tight end Brock Bowers. Earlier this week, Nick Saban had high praise for the opposing tight end:

“I think this guy is one of the premier players in college football,” Saban said. “So this guy is just a phenomenal football player all the way around.”

Bowers had five receptions for 55 yards and a touchdown in Georgia’s win over Michigan in the national semifinal. The Tide will need to keep Bowers in check if it wants to improve its chances of winning.

These two teams met in the national championship back in 2018, when the Crimson Tide defeated the Bulldogs 26-23 in an overtime thriller. It would be a treat to college football fans across the country if the second rendition lived up to the first.