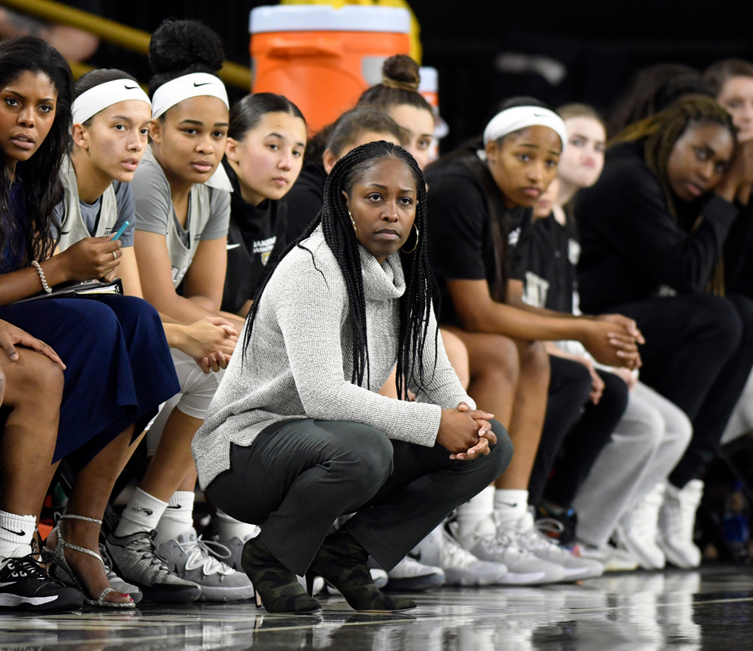 Ke'Sha Blanton on the sidelines coaching against the Youngstown Penguins.

The Oakland women’s basketball team improved to 4-2 in Horizon league play this week, as it claimed a hard-fought 63-60 victory over the Purdue Fort Wayne Mastodons on Thursday evening.

The Grizzlies, who had only six players available, were without many key contributors including leading scorer Kahlaijah Dean and Head Coach Jeff Tungate. Interim Head Coach Ke’Sha Blanton led the team in Tungate’s absence.

“Obviously playing a 40-minute game with six players is going to be just, first of all, mentally challenging,” Blanton said. “Trying to get our players to believe that they can play through tired, and that once they get to that peak of tired that they can fight through it and continue to play hard.”

Oakland struggled on both ends of the floor early, and trailed by 10 after one quarter of play. It was a team effort in the game’s opening quarter, with the scoring evenly distributed between Kendall Folley [2], Breanne Beatty [3], C’Erra Maholmes [2], Sydney Gouard [3] and Kayla Luchenbach [2].

“In the first half we were trying to conserve energy,” said Blanton. “We were playing like we only had six people, and they knew they weren’t going to get a sub. Just had to get them in the mindset that ‘you’re going to be okay, and just leave it all on the court, and we’ll figure it out after.’”

The Mastodons cooled down in a huge way in the second half, much in part to the swarming defense of the Grizzlies. Purdue Fort Wayne recorded only 11 points in the third quarter. A stellar eight-point third quarter from Luchenbach put the Grizzlies right back in the game, trailing by only five heading into the fourth quarter.

Oakland went ice-cold in the ensuing minutes, and gave the lead back to the Mastodons. With 1:35 left to play, and down by two, Alona Blackwell took over, giving the Grizzlies the lead with two huge buckets on back-to-back possessions. A Sylare Starks last second three-point attempt did not fall for the Mastodons and the Grizzlies finished with a gritty win.

Blackwell led the team in scoring for the first time all season with a season-high 17 points off the bench. Luchenbach and Folley each added 12 as the Grizzlies outscored the Mastodons 33-18 in the second half.

The Grizzlies’ next game is scheduled for Thursday, Jan. 13 against a struggling Wright State squad, who boasts just one win on the season. The game will tip off at 7 p.m. at the O’Rena.