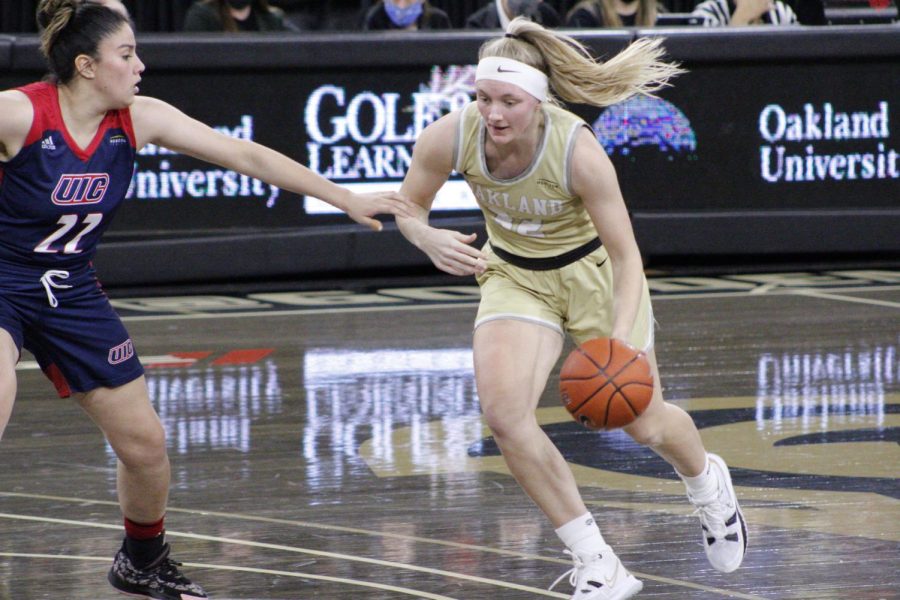 Kayla Luchenbach drives to the basket against UIC on Dec. 2.

The women’s basketball team hosted the University of Illinois-Chicago on Thursday, Dec. 2 in an early season Horizon League matchup. Oakland established an early lead and never let it go, holding off a late UIC run to win the game 67-59.

The Golden Grizzlies got off to a great start, leading the Flames 17-10 after the first quarter. Freshman guard Olivia Sims had five points in the game’s opening quarter, and Kahlaijah Dean added three points — along with two assists, a steal and a rebound.

OU didn’t let up in the second quarter, as Sims and Dean continued to lead the way. Sims finished the half with eight points on 2/2 shooting from behind the arc. Dean recorded 11 points, shooting 4/8 from the floor and giving the Grizzlies a 40-23 lead at halftime. Oakland dominated UIC on the glass, winning the rebound battle 20-12 in the first half. The Grizzlies also hit 50% of their three point attempts, compared to just 16% for UIC.

UIC regained momentum in the third quarter, outscoring Oakland by five points and cutting the deficit to 12. Sensing his team was struggling, Golden Grizzlies Head Coach Jeff Tungate shouted, “Let’s go! Get a stop!” to his team as The Flames began the fourth quarter with the ball. The Grizzlies stepped up defensively and offensively, ending any hopes of a UIC comeback.

Kahlaijah Dean finished with 16 points, leading the team in scoring for the sixth time this season.

“We ask her to do a lot,” Tungate said following the victory. “The thing that makes her different is she’s a great passer, and we know she’s going to make the right decision.”

This win comes off a two-game skid in which the Grizzlies dropped back-to-back games against Michigan and Michigan State. Despite the two losses to the in-state schools, Coach Tungate is hopeful the tough non-conference schedule will help his team in the long run.

“I hope it gives us confidence,” Tungate said. “I thought we did a pretty good job of holding our own against Michigan and Michigan State, so I hope it gives us a little bit of confidence in playing in those tough environments and tough situations against tough players. Hopefully it makes us tougher in the end.”

Oakland played tough themselves in this game, holding UIC to just 59 points — the fewest amount of points Tungate’s team has given up so far this season. OU is now just one game back from first place in the Horizon League, with much of the season still in front of them.

The Grizzlies improve to 2-1 in Horizon League play, and 3-4 overall. They look to even up their record against Indiana University–Purdue University Indianapolis (IUPUI) on Saturday, Dec. 4.