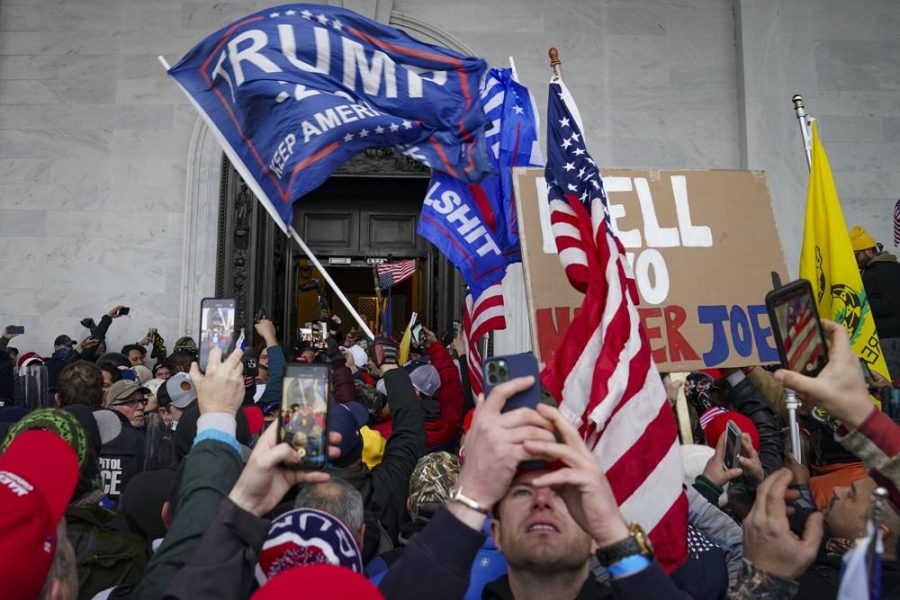 Rioters at the Jan. 6 insurrection of the Capitol. The U.S. Court of Appeals in the District of Columbia heard arguments investigating the incident.

As reported by the Associated Press, the U.S. Court of Appeals in the District of Columbia heard arguments from legal representatives of Donald Trump and the U.S. House committee investigating the Jan. 6. riot. This legal case focuses on whether Trump may claim “executive privilege” in blocking the House committee’s pursuit of presidential documents concerning the insurrection.

David Dulio, Ph.D. — professor of political science at Oakland University — explained that the political implications of the case center on Donald Trump. Specifically, such a case works to ascertain what role Trump played in the Jan. 6 Capitol attack, how far individuals will go in trying to pin the attack solely on Trump and how the case is indicative of broader political fissures in American politics.

The question looming over the case is whether a previous U.S. president’s claim of executive privilege may override that of the sitting president. A particular point of emphasis within the broader narrative surrounding the event is what role far-right paramilitary groups played in the violence that day.

“In its totality, Jan. 6 should not be considered an instance of domestic terrorism,” says Peter Trumbore, Ph.D., professor of political science at OU. “If we think about the people that stormed the Capitol, is it very clear from the evidence that there were organized groups of individuals who planned, trained and equipped themselves and then acted together with the intention of using violence to alter the outcome of the [electoral] decision process on that day.”

A main question pursued by the House’s investigation is why Trump and his legal team would work to prevent the release of White House visitor logs, presidential diary correspondence and hand-recorded notes to the committee’s investigation.

Dr. Trumbore elaborated on the connection between the Proud Boys organization and the White House’s visitor logs leading up to Jan. 6. However, he made a specific point to differentiate between those domestic terrorists that maliciously engaged in premeditated, politically motivated violence that day, and those in attendance who participated in the riot or did not engage in violence at all.

“There were people who were involved that may be justifiably classified as domestic terrorists, with their acts that day being examples of domestic terrrorism,” Dr. Trumbore says. “There are other people who we would struggle to define in those terms. That’s why I think we must be careful about matters of definition. The way that we define terms is important, as definitions draw out attention to the distinctions surrounding complicated political and human behaviors.”

Far-right paramilitary groups in attendance — such as the Oath Keepers — attended with levels of premeditated communication, organization and confrontational intent that was not seen with the protesters who did not attack Capitol police and storm the Capitol building.

“The best evidence available that we have points to two domestic terrorist groups in particular: the Oath Keepers and the Proud Boys,” Dr. Trumbore says. “Members and leaders of those groups engaged in significant amounts of pre-Jan. 6 communication, organization and planning — all in order to engage in acts of political violence on that day. If you’ve seen some of the videos of the groups of people in tactical vests, helmets and backpacks engaged in communication — with their hands on each other’s shoulders in coordination — moving through the crowd and breaching the building as a unit…those are the people we’re talking about.”

Regardless of the outcome of the court case, the losing side is predicted to question the U.S. Supreme Court in this battle between the former and current administrations over executive privilege.