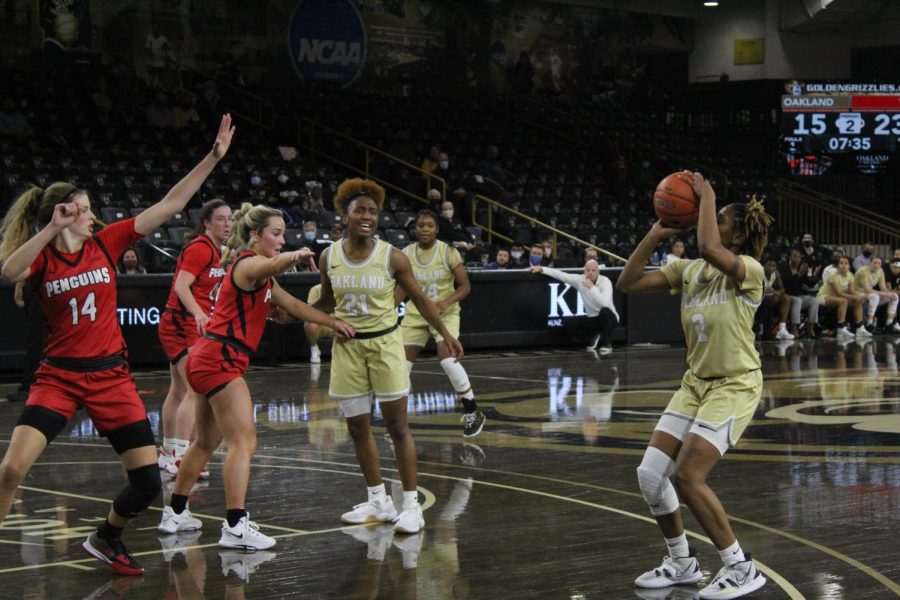 Sug Williams stops and pulls up for a jump shot against Youngstown State on Nov. 18.

Golden Grizzlies women’s basketball lost to the Youngstown State University Penguins 79-68 in their first Horizon League matchup of the season at the O’Rena on Thursday.

In the fourth quarter, Oakland was on a mission to make this a game, as they played their best basketball of the night. Oakland shot 45% from the field in the final period, including going 5-14 from beyond the arc on their way to a 27-point outburst to eat into Youngstown State’s lead. In the end, Youngstown State scored 18 in the fourth quarter, ending any comeback hopes and winning the game 79-68.

Despite the loss, Oakland showed their abilities in the second half, erupting for 43 points. Two Golden Grizzlies scored in double figures: senior guard Kahlaijah Dean and forward Kayla Luchenbach, who scored 18 and 10 respectively. Oakland also took better care of the basketball, ending with nine turnovers in comparison to Youngstown State’s 21, as well as ending with 16 points off turnovers in transition.

Oakland played their next opponent, the Horizon League rival Robert Morris University Colonials on Saturday, Nov. 20 at home before a road trip to face University of Michigan. Oakland looks to capitalize on its second half performance and will take this ferocity into the next game. The Golden Grizzlies are awake and looking to get back on track.