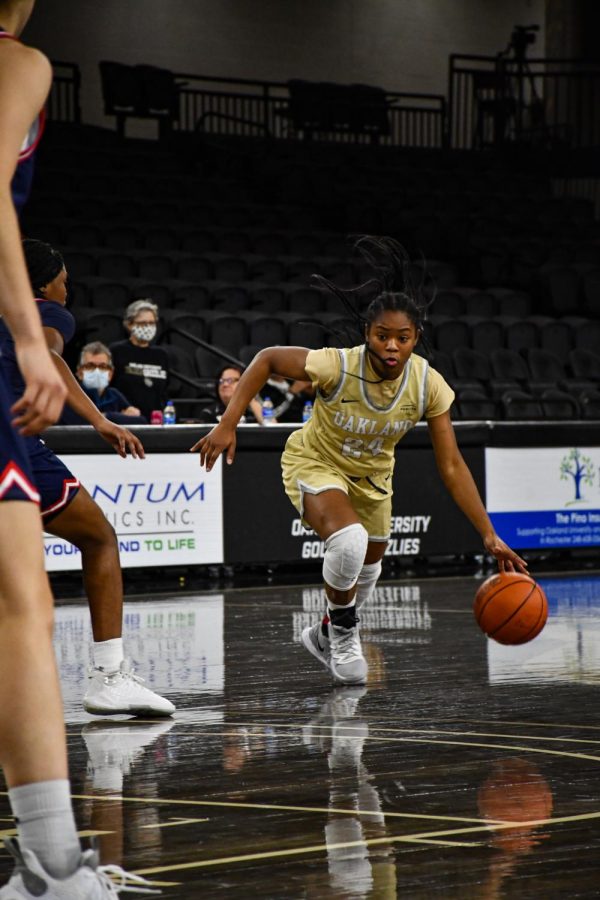 Brianna Breedy drives to the basket against Robert Morris on Nov. 20.

Women’s basketball faced off against Robert Morris University on Saturday, Nov. 20 at the O’Rena, defeating them 65-60.

Robert Morris got the jump off start, but that didn’t stop Oakland. Oakland led after the first quarter 18-17. The fight kept on, but Robert Morris pulled the lead with 33-32. They kept the lead through the third quarter with 45-41 points on the board. It certainly looked like Robert Morris was going to take the win.

With less than five minutes left in the fourth quarter during a timeout, Head Coach Jeff Tungate told the team: “if they don’t score here, they don’t win this game.”

When time resumed, the Grizzlies played aggressively — forcing a shot clock violation. Kahlaijah Dean turned around with a three pointer. These were all pivotal moments during the stretch run of the game.

In a previous interview, Coach Tungate mentioned the team has to improve on not easing up in the fourth quarter. Now, they didn’t have the lead, but the improvement is evident. It’s early in the season, but every game is a new start.

Tungate talked about the defensive improvement after the game.

“We know we can score,” Tungate said. “Robert Morris did a great job defensively. They didn’t do a great job with their offense tonight. Defense is what is going to win us games and tonight our defense won us the game. We’ve improved so much on those things and that was a huge step. We got three shot clock violations. Our defensive intensity was really good all night long. [Dean] is first-team all conference for a reason — first team all conference players make those shots and she did. It’s a huge win for us, we needed it.”

Oakland pushed hard and didn’t let up, allowing them to gain ground back and win with a score of 65-60. Kahlaijah Dean, also known as KD, earned title ‘player of the game’ at the match, leading her team back from a seven-point deficit.

ESPN interviewed Dean after the game where she said:  “[our] key factor was defense. We hold ourselves to defense.”

Dean has had a successful season so far in points scored and her gameplay.

Saturday’s match added a second win to the season. This brings their record to a 50/50 win/loss rate at 2-2. If the start to the season is any indication of how the remainder of it will go, it’s shaping up to be a nail-biter.

“We still have 20 League games to go,” Tungate said “Normally this time of year you’re playing non-conference games trying to get better. Now, we have to learn from the conference games. We have quite a week ahead of us, as we’ll be a part of the Big Ten. We play against the University of Michigan Monday. We face off against Michigan State this Friday.”

The team’s next home game is against the aforementioned Michigan State Spartans on Friday, Nov. 26 at 3 p.m. at the O’Rena.