Looking Back: ASL’s rocky road to recognition at OU 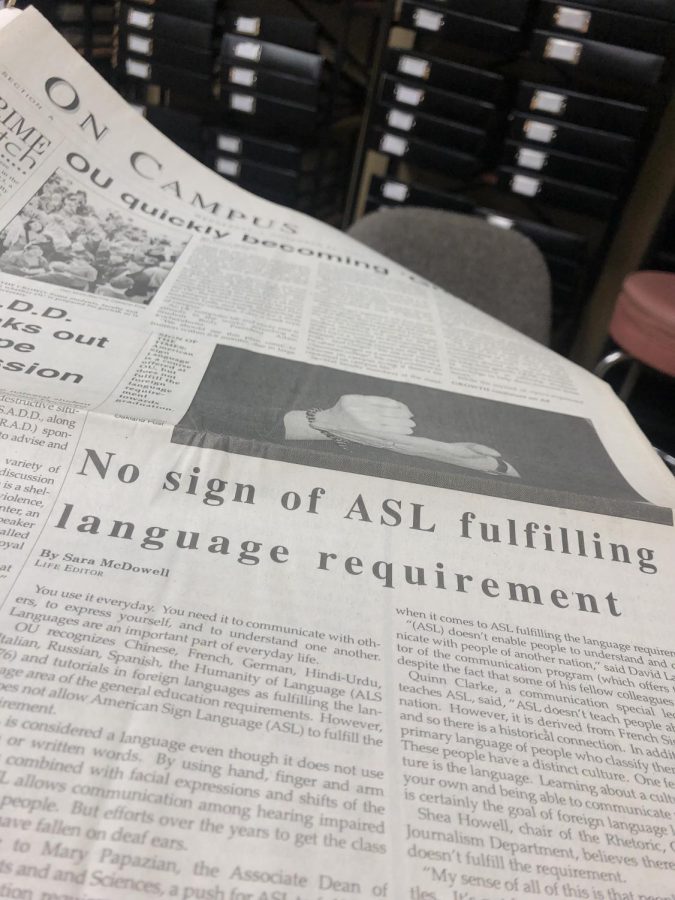 The study of American Sign Language (ASL) has been a part of OU’s communication department since the late 1970’s. Following the approachment of department founder Donald Hildum by the parent of a Deaf child who was looking for a place to learn the language, Hildum was immediate with his efforts to offer such courses. At the time of an article published in The Oakland Post on Nov. 29, 2000, however, the university as a whole was showing no signs of exhibiting the same recognition toward the language — a recognition that ultimately wasn’t awarded until 2019.

Within the 2000 article, a lack of ties to another nation and the absence of someone with a doctorate degree in the subject were cited by former communication program director David Lau as reasons for the university’s long-standing reluctance to recognize ASL as a modern language capable of fulfilling the language area of general education requirements. The article noted that in spite of these supposed reasons the language didn’t qualify for this fulfillment, more than 100 universities at the time were using it to fulfill their own language requirements.

The battle for university-wide recognition of ASL as a modern language was initiated by communication professor (and chair of the Rhetoric, Communication and Journalism department at the time of the 2000 article) Dr. Shea Howell in the early 1980’s, whose efforts were thwarted by the Departments of Linguistics and Modern Languages — hence the lengthy era of ASL courses only counting toward the communication program’s own language co-requisite.

“It’s not because there is any intellectual basis to deny this — ASL is a valid language that should be recognized and supported,” Howell told the Post in 2000. “As a university that is concerned with community outreach, for us to not create a viable program around sign language is an embarrassment. I think it is a political issue that if people take sign language, they won’t be taking something else.”

In 2021, Howell reflects on the ways in which the Americans with Disabilities Act (ADA) of 1990 marked a cultural shift that brought the development of sign language programs to the forefront and reinvigorated the communication department’s efforts for university-wide recognition.

“We tried to educate the university to the fact that (ASL) has a culture, has a literature, has an artistic expression, and is a complete language system,” Howell said, “and that fight went on for a very long time.”

The proposal was ratified in 2019 — after which the Department of Modern Languages finally requested that the study of ASL be moved to their department. The Communication department was strongly opposed to this, and their preventative efforts were successful.

“We have three decades of experience in offering [ASL courses], we provided leadership to the university in recognizing it as a full, complete language when others had failed to do so and we are well-connected in the community to which we are ultimately responsible as we offer this program,” Palmer-Mehta said. “[…] That’s why we think that we are best positioned to offer it — because we could recognize these things when that department did not.”

In the wake of these efforts, students from every department have the option of selecting ASL as the class that fulfills their general education language requirement — and according to faculty, many more do so following this change.

“That opportunity for general education credit and the [Communication and Deaf Studies] minor created a high demand for ASL classes — I’m teaching four this semester and three next semester,” Kirsh said. “Uniquely, […] I [also] had the opportunity to create an entirely asynchronous online class.”