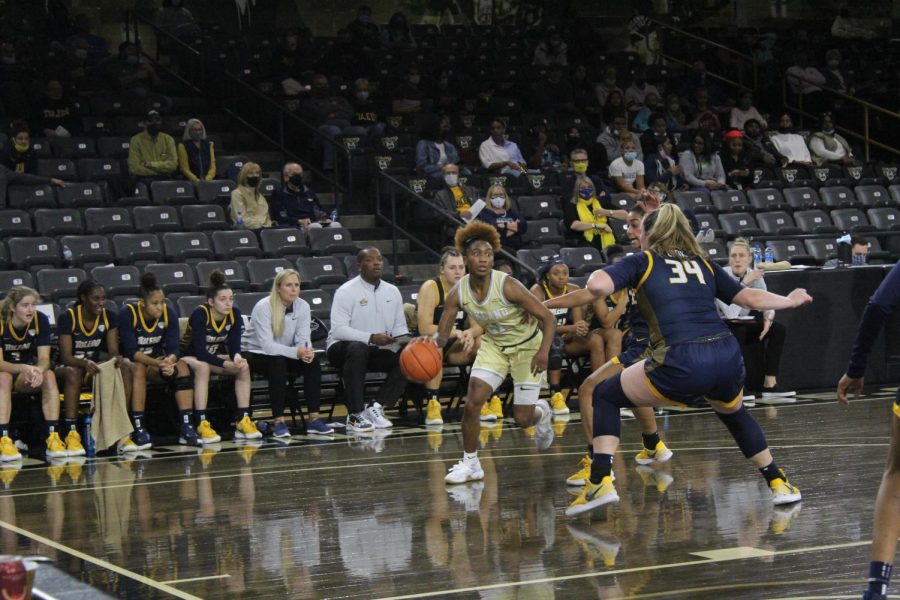 Kahlaijah Dean dribbles the ball against Toledo on Tuesday, Nov. 9.

The Oakland University women’s basketball team fell to the Toledo Rockets 84-72 in their season opener Tuesday night at the O’Rena.

The first quarter mostly consisted of a three-point contest. Guard Kahlaijah Dean led the way for the Golden Grizzlies with eight points in the quarter, including two three-pointers. Guard Quinesha Lockett matched that effort for the Rockets. Oakland led 21-14 after one.

The second quarter featured both teams finding a lot of iron. Both teams struggled from the field in the quarter, that is until the Grizzlies started racking up some fouls. Guard Khera Goss tied the game on an and-one, then Toledo would take the lead shortly thereafter to force an Oakland timeout. The Rockets were on a 10-0 run at the time of the timeout.

Dean would tie the game, then give the Golden Grizzlies the lead on the next possession.

The last three minutes of the half is where the scoring finally started to pick up, with both teams trading baskets. Toledo would take a 36-34 lead into the locker room.

The Grizzlies started out fast in the second half, with five quick points for forward Kayla Luchenbach. The Rockets would match that intensity, however, and take a four point lead, 47-43 into the first media timeout of the half.

Dean would tie the game with a pair of free throws with about three and a half minutes left in the third quarter. Then Toledo would go on a quick 5-0 run to take their largest lead of the game to that point and force an Oakland timeout.

The Rockets’ lead would balloon to as much as 10. They led 63-53 after a buzzer-beater layup to end the quarter.

In the fourth quarter, the Grizzlies would try to claw their way back in it. Sadly, Toledo’s offensive firepower was just too much to handle in the end. The Rockets would take the season opener 84-72. Dean had 27 points in the loss.

“She took over the game when we needed her to,” Head Coach Jeff Tungate said of Dean. “We couldn’t buy a bucket and so she said ‘I’m gonna do it.’ So she kind of had to take that responsibility on herself but she’s a great player. There’s a reason she was first team all-league last year and preseason all-league this year. She played like an all-conference player tonight and said, ‘I’m not going to lose. Give me the ball, let’s go.’ That’s what we expect from her and I think she did a good job with that.”

Tungate said the team ran out of gas toward the end of the game.

“I think we’ve got to develop more depth,” Tungate said. “I think we expected a lot of our top players that play a lot of minutes and I think when the shots started falling, it affected our defense…and that’s something we got to fix but I just think we got to do a better job of developing our depth and giving our our top players a little bit more rest.”

Tungate said the team has to “clean things up quickly,” noting that they only have about a week to prepare for their first conference game of the season.

“We’ve got to take tonight and get better at what we’re doing,” he said. “I thought our effort was really good. I thought our intensity was good. I thought they played extremely hard. But we just got to clean up some things moving forward and keep getting better because we don’t have till January now to wait for a league game—we play a league game in a week. So we’ve got to fix some things really quick.”

The next game for the Golden Grizzlies will be against Youngstown State on Thursday, Nov. 18 at 7 p.m. at the O’Rena.