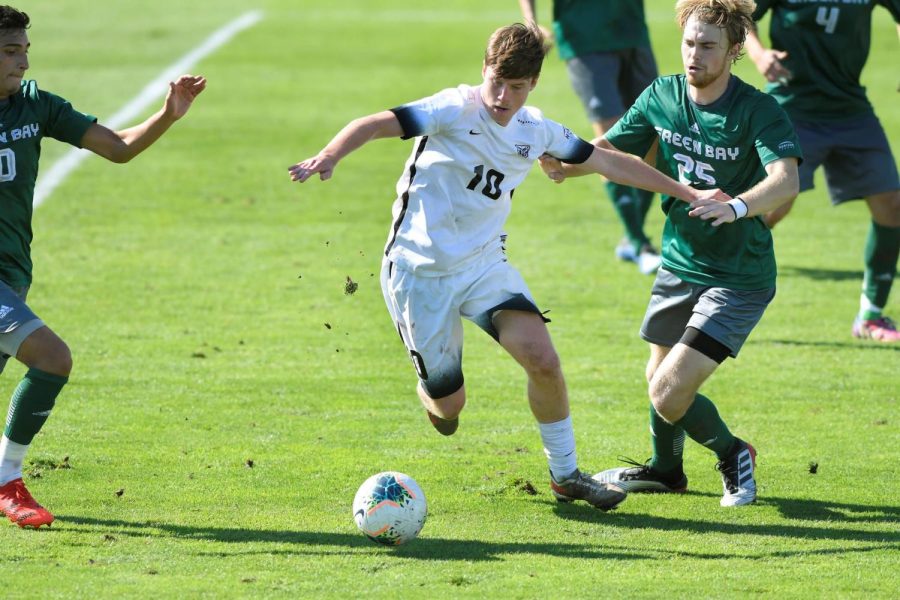 Oakland takes on Cleveland State on Saturday for a spot in the NCAA tournament.

Much like the women’s soccer team, the Golden Grizzlies men’s soccer team has advanced to the final game of the Horizon League playoffs to face off against the Cleveland State Vikings.

With their eyes set on closing out their amazing season with the championship gold to match their namesake, the Golden Grizzlies came into their semi-final game against the University of Illinois-Chicago Flames with focus and determination.

The game started off with a back and forth bout of even play for the first fifteen minutes, as the high-energy, fast paced soccer match kept picking up steam and speed. The Golden Grizzlies would tip the scales in their favor early on by capturing first blood on the back of an amazing shot to the bottom back corner of the net.

Now down 1-0, the Flames would try to lay on the offensive pressure and equalize the score with a longshot from far outside the goalie box. Although the attempt would go wide to the right, it most certainly put the Grizzly defense on notice.

The Golden Grizzlies would restrict the Flames to attacking primarily with longshots by playing absolutely marvelous defense inside the box. With that same defensive intensity spreading to the rest of the field, the Grizzlies would keep the Flames down a goal all the way until halftime.

Coming out of the halftime break, the Grizzlies would look to capitalize on the momentum their play has afforded them as the Flames tried to turn that momentum against them and claw their way back into this game.

With the physicality rising every minute, the Flames were awarded a penalty kick after a hard foul in the box. However, true to everything else that happened in this game, the Golden Grizzlies’ defense would stand strong as goalie Finn Jurak would make what may have been the save of the game by blocking what should have been a free point for the Flames.

Demoralized by the block, the Flames would fail to create a single point on repeated drives until the Grizzly defense would finally crack and allow the equalizing goal. Now tied 1-1, the Flames offense would continue to pick up steam while the Grizzly offense continued to slow down.

The hopes of a comeback would be dashed quickly, however, as the Grizzlies would be awarded a penalty kick after a hard foul. In a complete turnaround from the Flames’ earlier attempt, the Grizzlies would capitalize on their chance and find the back of the net to make the score 2-1.

That penalty kick would turn out to be the final nail in the coffin for the Flames, as the Golden Grizzlies would celebrate their advancement to the championship game after a 3-1 victory.

Head Coach Eric Pogue would praise the boys after the game for the win, their play all season, and stress the importance of resting and recovering ahead of the upcoming championship game.

“We’ve been really good the last part of the season, and so I think it’s really just a matter of rest and recover,” Pogue said “We just played both these teams [Milwaukee and Cleveland State] not too long ago—and during this time of year, they say that winners make plays. I think it’s just rest, recover, analyze the game, see if there’s anything that we can do, but at the end, I think it’s just gonna be a matter of winners making plays.”

Oakland will take on Cleveland State in the Horizon League Championship game on Saturday at 1 p.m. at the Oakland Soccer Field.