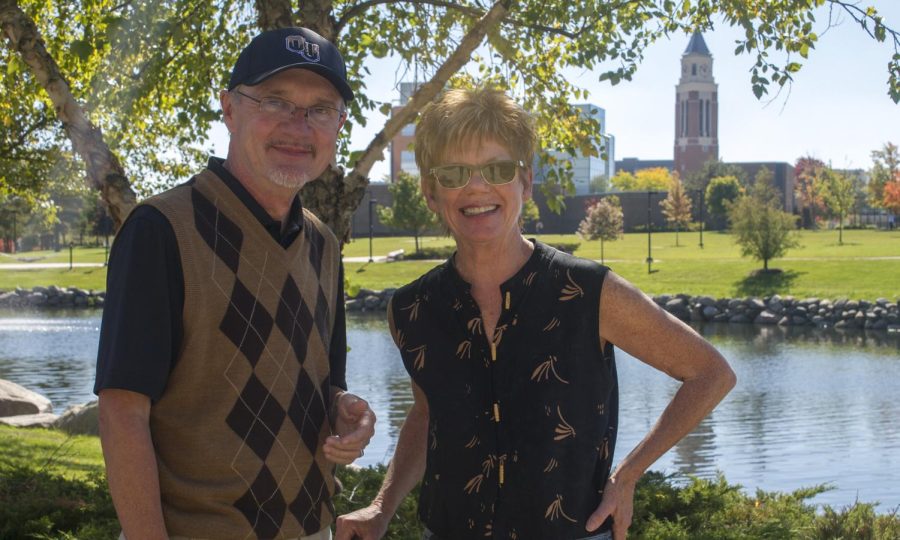 Facts vs. Opinion, an “office hours” virtual presentation, was hosted by Oakland University’s Center for Civic Engagement led by Director David Dulio, Ph.D. on Thursday, Nov. 4. At the event, professors of the Journalism Department Holly and Garry Gilbert were asked about objectivity, opinion and biases and the level of disagreement about objective facts in journalism in U.S. history. In a Q & A format, the professors discussed ideas for finding “the best obtainable version of the truth.”

Garry: Journalism is our passion and vocation. These are challenging times to be talking about this topic. I get a few raised eyebrows when I tell people I teach journalism at Oakland University. The public has been long suspicious of the ethical, honest version of journalism. It’s complicated — there’s been no easy answer here. It certainly didn’t start in 2016, but definitely helped. The press is all too willing to devour anyone at any time.

Truth decay. Blurring of the line between news and opinion. What happened to objectivity? Unpack that for us — opinion vs. news. What are your thoughts?

Garry: Many that side with the liberal/Democrat side want the news media to give them the facts and help them interpret those facts. Conservatives say “Give me the facts. I’ll decide what they mean.” It is part of our responsibility to not just teach them what’s true, but what it means. Opinion is cheap. Opinion is easy to produce. Ranting makes great television. Being outrageous and provocative has been proven to grab people’s attention. People will go back and comment. Fact-based reporting is not nearly as easy as opinion.

Holly: There are things that people watch that they think is news, and it’s not. They are talk shows. They’re not news.

Am I correct in saying many journalists want to be first? Is there pursuit of the scoop?

Garry: Absolutely. Ultimately, speed is the enemy of accuracy. We all feel pressure to get the story out first. We’re more likely to remember who got it wrong, versus who got it out first. I was the editor in a newspaper in the 2000 election. We had the news like we were four months ahead. We were right, just too far ahead. That was one of the worst nights of my journalism life.

Let’s talk about fake news. I want you to define that. If a media outlet gets something wrong, is it fake news?

Holly: Those two words just drive people crazy. There’s a long history of actual fake and falsified news. Now that term has been politicized and weaponized by politicians to discredit news stories that they do not like. It’s also used in other countries to limit what gets out.

What happens when someone gets something wrong?

Garry: When you’re wrong, you don’t scrub it. You don’t delete it. You be transparent about that mistake. Acknowledge what happened and tell the audience that you’re sorry. Don’t hide it.

Holly: I think now that maybe because we have shorter memories because there is so much going on — we’re more forgiving of these mistakes. People get over it, or they forget.

What are the best news sources out there?

Holly: That is subjective.