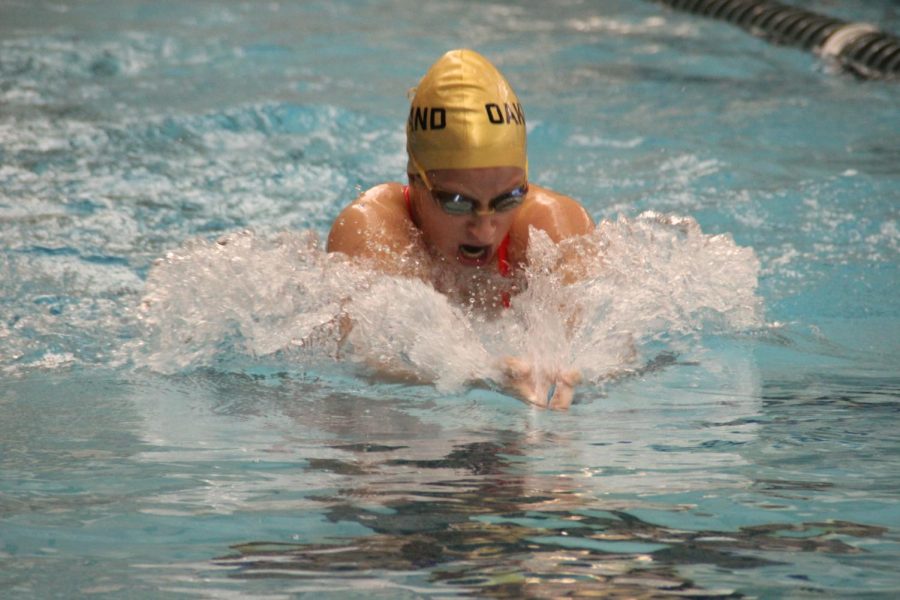 A Golden Grizzly swimmer starts their run in an event on Friday, Nov. 5 against GVSU.

The Oakland University Golden Grizzlies men’s and women’s swim team rolled past the Grand Valley State University Lakers in their return to the Oakland Aquatic Center on Friday.

Returning from last week’s A-10 classics, Oakland combined took the most Gold, Silver, and Bronze medals in competition for one of their most dominating wins to date. Oakland won the gold advantage 26-6, including a 16-0 medal sweep from the women’s Team, 18-15 on silver, and 16-14 on bronze to win over Grand Valley State in convincing fashion.

Lagrand, to go along with her multiple golds, led individual scores with 717.7 in total. Teammates Shipps and Taylor Bailey weren’t far behind, posting scores of 686.0 and 680.3, respectively. In team scores, Oakland’s dominant performance allowed them to win the women’s match 230-70.

Oakland’s men’s team faced a tough competition with Grand Valley State, winning the medals advantage 10-6  in gold, nine to eight in silver, but lost the bronze totals 10-5. Three Oakland swimmers won multiple gold medals on their way to a narrow win, being Andrew Bernsdorf, Christian Bart, and Marko Khotynetskyi, all of whom won two  in total. Credit must be given to GVSUs Jon Ketzenbach, who won two golds and a bronze on his way to top individual scores of the event, earning 719 points.

Competitions were back and forth leading into the final events for the men’s team, who won their final three events to take the advantage in gold medals. Grand Valley State’s Ketzenbach pulled the final gold for his team in the 500-yard freestyle, but Oakland won the 100-yard fly, the 200-yard IM, and the 400-yard relay to seal the Oakland victory. In team scores, Oakland won narrowly, 159.5 to 140.5.

After gaining momentum against a flurry of difficult opponents, Oakland University faced it’s first Horizon League rival on Nov. 6 against the University of Illinois Chicago Flames, who is coming off of a three-meet losing streak. Last time the two schools met in the regular season, both the Oakland men and women teams won in convincing fashion, posting scores of 205-79 and 177-121 respectively.

As Oakland continues its trek to a ninth consecutive Horizon League Championship, both the men and women’s teams look to test their capabilities against a UIC team that looks to rebound. Coming out of this matchup, Oakland is ready for the test.