Letter from the editor: Administrators won’t talk to us about campus construction projects 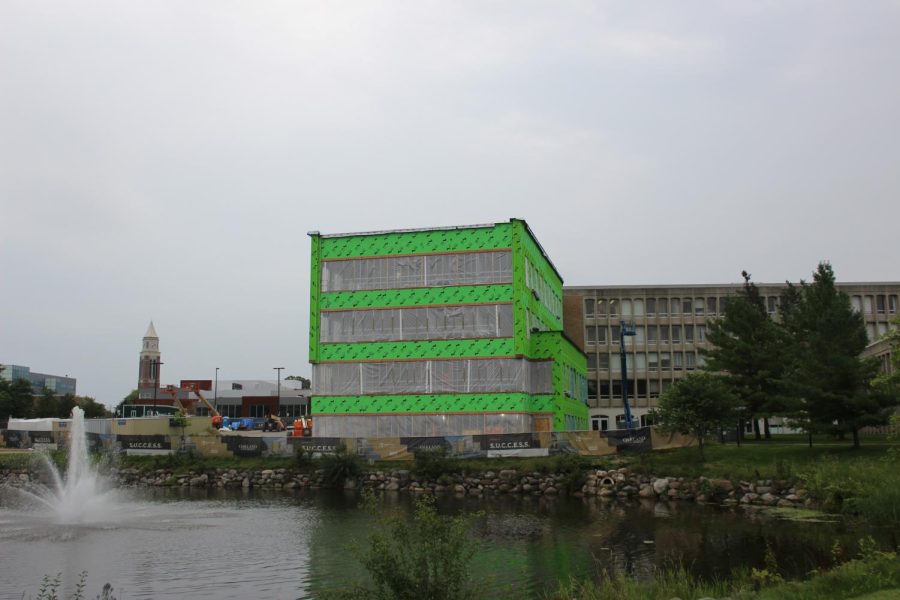 The Wilson Hall expansion and renovation has been underway for several months now. The $21.5 million project features new luxury accommodations for President Pescovitz and her cabinet.

For six weeks now, The Post has been trying to research and report stories about ongoing campus construction projects. To this point, not a single administrator has followed through with our requests for interviews.

This is important because Oakland University is a public university. The money OU administrators are entrusted with are public funds, specifically taxpayer dollars and student tuition. We have pursued this story because our readers have a right to know how the administration is spending these funds.

There is no reasonable justification for withholding information pertaining to these projects. Despite being given a number of opportunities to be transparent with the campus community, administrators have chosen to disregard our inquiries.

Now, the idea to cover the campus construction projects was simple enough. Considerable progress has been made on the $21.5 million Wilson Hall renovation while the $40 million South Foundation Hall (SFH) project seems delayed. Given the recent 4.2% hike in tuition, the projects are of high interest to our readers, so it was a no-brainer to get more information out about how the projects are developing.

The plan was to take what little information we had available on the projects and corroborate it with interviews from the administrators leading the projects. It all seemed straightforward, yet the immediate feedback I got from campus sources was that the projects were a touchy subject and we’d have a hard time getting administrators to go on the record. This seemed strange, but we proceeded with pursuing the stories. This is how things have unfolded.

Since the middle of September, Post staff members, primarily Managing Editor Bridget Janis, have been engaged in email back and forths with several administrators in efforts to secure an interview. The administration has rewarded our attempts to get out the most accurate information possible concerning the projects by ignoring our emails, demanding that questions be submitted prior to interviews, demanding interviews be conducted via email and ultimately cancelling interviews.

The first administrator we spoke to was the now-retired Vice President for Finance and Administration John Beaghan. In his correspondence with Janis, he repeatedly stated that his schedule was too tight for an interview and that we’d need to email him questions and he’d answer them when he had time.

This was a non-starter for us. Emailed questions to administrators generally lead to lackluster responses. We were particularly dubious of the request considering the fact that it takes longer to type out answers to questions than it does to give verbal responses. If the issue was time related, it would in fact be more expedient to get on the phone with Janis than fool around with emails.

In efforts to attain a quality interview, Janis followed up by offering more availability for Beaghan. Despite having options weeks in advance to schedule the interview, he insisted that his schedule was too tight and that we needed to email him the questions.

While this correspondence was going on, Janis also reached out to Associate Vice President of Facilities Management Pat Engle. An interview seemed to be set with Engle for Friday, Sept. 24, but prior to the details of the meeting being finalized, Engle quit corresponding with Janis and the interview never came to fruition.

About two weeks later, correspondence resumed with Engle, at which point she informed Janis she’d be going on a vacation that would delay the interview a couple more weeks. At this point, Janis also reached out to Senior Project Manager Stuart Rose, but he never responded to her emails.

As Janis was reaching out to administrators, Director of Media Relations Brian Bierley became aware that we were trying to source someone for an interview and reached out to offer Janis some background information on the projects. Eventually Executive Secretary Shannon Stribling also got involved in the sourcing process.

With Stribling’s help, finally, an interview seemed to be secured with Engle and Rose for Janis. At this stage, we were informed by Stribling that the condition for Rose agreeing to this interview was that The Post would have to supply the questions for the interview a full week in advance.

Supplying questions a week in advance of an interview was an extraordinary concession for us to make. It was a move that we did not make lightly, but we complied in good faith, hoping that the administration would finally provide transparency on the projects. The interview between Janis, Rose and Engle appeared to be set, with Bierley and Post Editorial Adviser Garry Gilbert also scheduled to attend the meeting.

Janis compiled her questions and sent them out late in the afternoon on Thursday, Oct. 21. On the morning of Monday, Oct. 25 Janis received an email from Stribling informing us that Engle and Rose would not be able to answer our questions, that it would take some time to acquire answers to our questions and that any interview would have to be “postponed indefinitely.”

Now, this rigmarole has been as tedious as it’s been ridiculous. It shouldn’t take months to source answers to basic questions about enormous multi-million dollar campus construction projects.

At this point we know that OU issued $98 million in tax exempt bonds to fund renovations for Dodge Hall, SFH, Varner Hall, Wilson Hall, an off-campus research facility, central heating infrastructure and other projects. As of June 30, 2021, $17.5 million of the bond proceeds have been spent on such renovations.

President Ora Hirsch Pescovitz’s State of the University Address revealed that the currently active Wilson Hall renovation, expected to be completed by August 2022, cost $21.5 million. The SFH renovation, which was seemingly delayed, has an expected completion date of Fall 2023 — costing the university $40 million. Varner Hall’s $45 million renovation has a projected occupancy date of Fall 2023.

We know anecdotally that a significant portion of the Wilson Hall renovation is dedicated to new luxury accommodations for President Pescovitz and her cabinet. The renovation is also supposed to include new administrative space for students, similar to North Foundation Hall.

We don’t know what the square footage split of space for President Pescovitz and her cabinet and space for student administrative services in Wilson Hall is. We also don’t know why the SFH renovation was delayed while the Wilson Hall project was able to proceed as planned.

Following this paragraph is the unedited list of questions that Janis sent to administrators a week prior to the interview that was scheduled and then cancelled for Thursday, Oct. 28. Since asking privately is not enough to reciprocate a timely response, I am now asking publicly for transparency from the administration concerning the construction projects. There’s no good reason why an administrator can’t come forward and supply answers to these questions for the campus community.

At the Board of Trustees audit committee meeting John Beaghan mentioned that OU issued $98 million in tax exempt bonds for the construction projects. As of June 30th, 2021, $17.5 million of that has been spent, as of today roughly how much of the money has been spent?

Of the remaining money, how is it being distributed among individual projects?

How did the delay of the SFH affect the order in which construction on these projects proceeded? Why was the renovation of Wilson Hall able to proceed, while SFH wasn’t?

Let’s start with the renovation of South Foundation Hall.

It is our understanding that the renovation is stalled due to a delay in state funding. Can you explain what’s going on?

For the sake of context, can you help us understand where the funding for the SFH renovation is coming from?

Do you have a new date for the expected completion of the renovation?

We realize that it is difficult due to COVID to know exactly when the South Foundation classroom space will be needed. What are your projections for classroom space needs for 2022, 2023 and so on?

How will these changes benefit students?

While the work inside SFH is stalled, the expansion of Wilson Hall is very much in the public eye.

Is the renovation running on time?

Can you help us understand where the funding for the Wilson expansion is coming from?

It is our understanding that a portion of the space will be used by President Ora Pescovitz and her cabinet. Can you give us a percentage? Square footage?

Will admissions have a home in the new space? At a time when enrollment is down — and we’ve known for years that the pool of high school graduates in Michigan will shrink for the next five to 10 years — why does the administration need more space?

At the state of the university address, the projected cost of the renovation was $21.5M — the project seems to be well underway, so are the finances on track and reflecting this number?

How will the Wilson expansion benefit students?

Concerning the Varner Hall project, how much progress has been with the renovations made so far?

At what date are students and faculty expected to be out of the building?

What can you tell us about the scope of the work being done? Is it mostly mechanical and technological updates or are there major structural renovations being done to the building as well?

How will these changes benefit students?

What can you tell me about the progress so far with the construction of the off-campus research center?

When is it expected to be completed?

How exactly is the new research center going to be utilized by the university?

Also at the State of the University Address, the projected cost of the renovation was $18.2M — the project seems to be well underway, so are the finances on track and reflecting this number?

How will this benefit students?

What can you tell me about the scope of the work that was done at Dodge Hall?