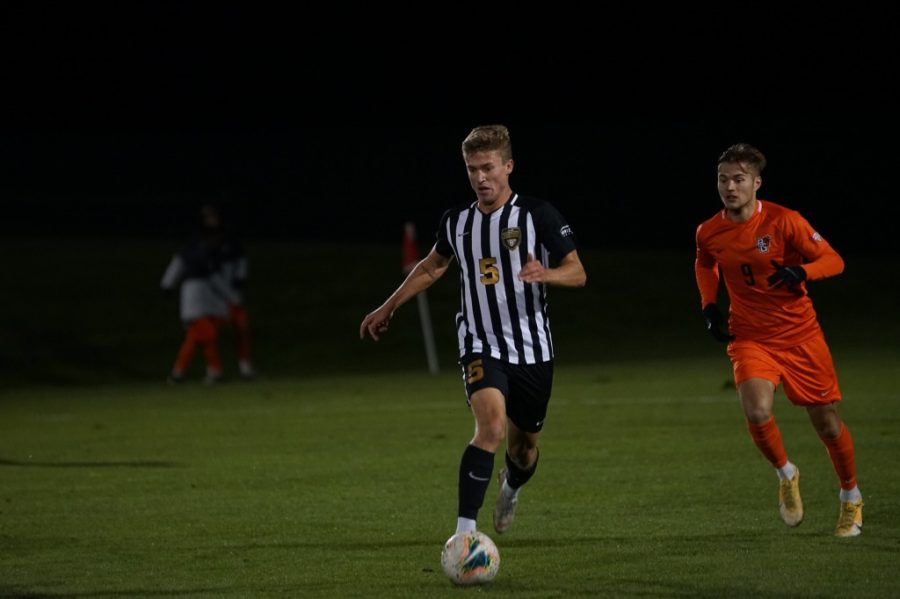 On the cold night, Oakland University recognized all of their international student athletes. They all lined up on the field holding their home country flag and stepping forward to wave at the mention of their country. It was a beautiful sight of all the international students and diversity amongst the players with how many countries were represented.

Losing 3-0 is a hard defeat for anyone but especially losing like that coming off a five-game win streak. That is a tough one to accept. Head Coach Eric Pogue said in his GrizzVision interview — “it leaves a bad taste in your mouth.”

Bowling Green was coming off a 5-1 loss to Akron. Both the Grizzlies and Bowling Green had a conference game following this. Bowling did not want to go into a conference after a hard loss and add a second one, which resulted in them coming in swinging to prove themselves.

“In the first half we decided to kind of go off the grid a little bit and not follow the game plan,” Pogue said. “We had a better way of doing things. Bowling Green made us pay for that, made us look silly. It was humbling.”

Losing this game may have humbled them as Coach Pogue had stated — perhaps it was necessary with their winning streak. As most know, people ride the highs of winning oftentimes to get knocked off unexpectedly. This was their smack back to reality for their next conference game: the proceeding Saturday against Milwaukee.

While this is disappointing for the team and fans to have this break in the team’s winning streak and lose 3-0, it is not the end of their journey. The important match was the following Saturday against Milwaukee. Based on how that game turned out determined whether they have a first-round bye in the upcoming Horizon League tournament.

While it may have been a tough game ending in no points on the board for Oakland, their own Dawsun Schrum and Mohammad Jamal Issa attempted to get points on the board with a shot on goal each. Bowling Green had a total of four shots on goal with goalkeeper Finn Jurak saving one of the four.