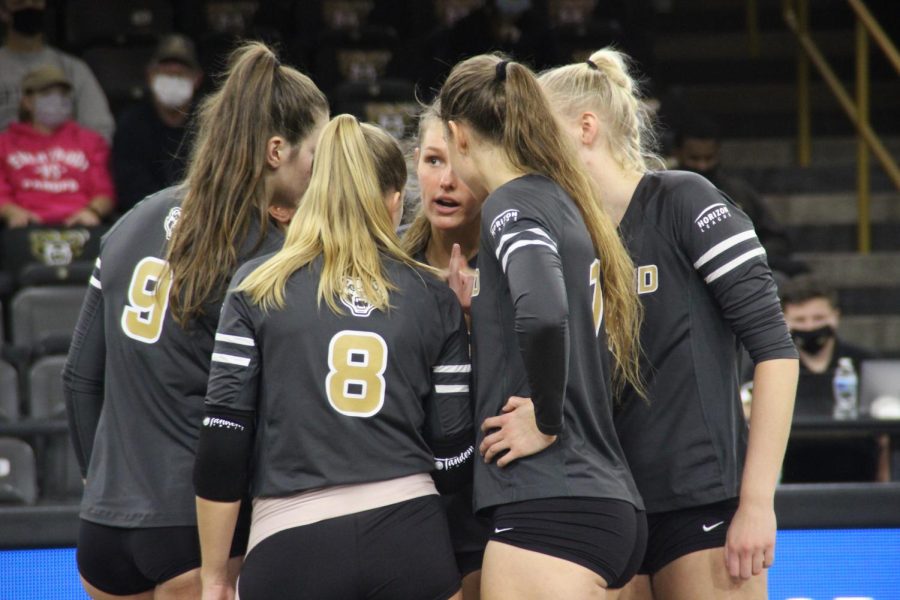 The volleyball team huddles up against Youngstown State on Oct. 24.

After an arduous five-set matchup, the Oakland University Golden Grizzlies leave the court victorious after defeating the Youngstown State Penguins 3-2 on Sunday.

Lots of plays were caught in the net, like the few service errors and errant passes that were thrown around the court. Both teams looked a little sluggish to start, as if they didn’t have the energy to make the hustle plays needed to both get and stay ahead.

Eventually, the defense for the Grizzlies would lock-in and get back-to-back blocks in one possession before the Penguins offense would follow suit and have a spike find the opposite floor. The Grizzlies would continue to build their own momentum on the back of their amazing defense, as the focus that seemed to be lacking earlier in the first set is now being put on full display as they worked to take the lead.

Although they would get good looks, the Grizzlies would fail to finish the spikes and get them down to where they needed to be. They would find their offensive footing after a timeout and a few substitutions, but it wouldn’t be enough to win the set as the Penguins would nip their comeback in the bud and win the set 25-20 after a solid kill.

The second set would end in a completely dominant showing from the Golden Grizzlies. Showing no effects of the apparent hole they would have to dig themselves out of, the Golden Grizzlies would come out of the set break with a renewed sense of energy and focus and absolutely decimate the Penguins. With their lead once reaching the peak of 14 points, the Grizzlies would take the second set with a score of 25-12.

The Penguins would emerge from the scorched earth that was the second set, and build themselves back up with solidly balanced play. OU looked to carry their electric momentum from the second set into the third, but Youngstown State would bounce back from their abysmal second set and hang on to win the pivotal third set with a score of 25-22 after trading the lead multiple times.

Taking a commanding 2-1 set lead, the Penguins would come in and try to close out the Grizzlies and take home the win. Little did they know, that close third set loss would light a fire under the Golden Grizzlies as they once again showed their dominance. The Golden Grizzlies, who at one point would double the score of the Penguins with their own [14-7], would win the set with a score of 25-15 and force a game-deciding fifth set.

And just like that, the race to reach 15 points first was on and the final set was quite the battle. The Grizzlies would dominate right out of the gate, building their lead up with a score of 7-2. As the Grizzlies inched closer and closer to the win, the Penguins play became sloppy and sloppier.

After reaching match point with a score of 14-7, the final nail in the Penguins’ coffin would come off of a dazzling spike that would find the opposite side of the floor and crown the Golden Grizzlies as the victors with a score of 15-9.

The Golden Grizzlies will return to the court on Oct. 29 to face off against Cleveland State University at the O’rena.